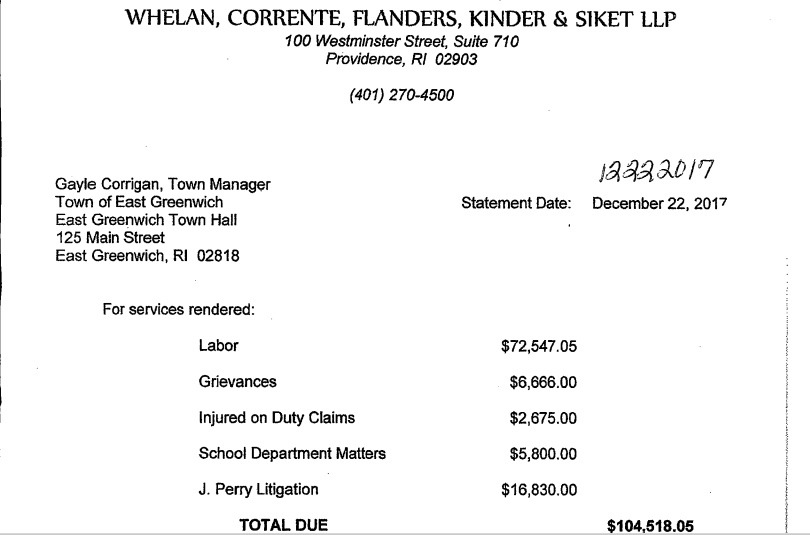 The Town of East Greenwich paid $104,518 to the law firm Whelan, Corrente, Flanders, Kinder and Siket for legal services through Nov. 30. This is in addition to the $11,500 a month ($135,000 annually) paid to Town Solicitor David D’Agostino. Tim Cavazza, a lawyer at Whelan, Corrente, has been working on labor-related issues for the town at least since Sept. 11, when he was seen entering the Town Council’s executive session after its regular meeting that night. However, the bill released by the town does not offer a start date. Nor does it include the cost per hour for services.

It is unclear what is included in the $72,547 for labor services but certain town expenses not yet otherwise accounted for may be part of that number. Town Manager Gayle Corrigan presented a consultant, Michael Walker of Berkshire Advisors, at the Town Council’s Aug. 28 meeting. That consultant also did work for North Kingstown when Whelan, Corrente was representing that town on firefighter labor issues.

On the $6,666 for grievances, according to EG firefighter union officials, Cavazza took part in one meeting over grievances before Nov. 30.

It’s also unclear what the nearly $17,000 spent on James Perry litigation went toward. The town’s defense in that lawsuit – which was fast-tracked, taking less than two months in total – was conducted by Town Solicitor D’Agostino.

According to public records, the City of Providence paid Cavazza’s law firm $230 an hour for similar legal services (Providence Letter of Engagement). East Greenwich declined to provide a letter of engagement, saying it did not need to under Rhode Island law. Alternatively, the City of Providence did release the entire four-page letter with only a single redaction.