Bernard Patenaude has served on the Cranston Fire Department for 39 years.

On Wednesday, Acting Town Manager Joe Duarte announced the appointment of Bernard L. Patenaude as East Greenwich’s new fire chief. Patenaude has served on the Cranston Fire Department for 39 years, the last 9 as assistant chief. He started his work in fire service in East Greenwich at age 16, when he joined the then-EG Fire District as a volunteer.

“East Greenwich is where I started and it’s nice to come home,” said Patenaude, a member of the EGHS Class of 1979. He said he will start April 1. 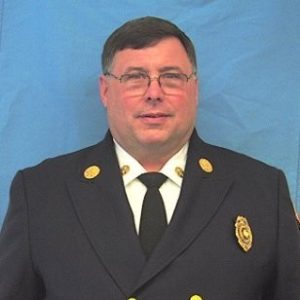 Patenaude’s appointment ends the town’s 17-month stretch without a permanent chief. Former Town Manager Gayle Corrigan dismissed Chief Russell McGillivray in November 2017. The position was then filled by three interim fire chiefs, first Christopher Olsen from New Hampshire (until January 2018), then Kevin Robinson of Marshfield, Mass. (who served from January to November), and finally by EGFD Capt. Thomas Mears from November until now.

The search for a permanent fire chief started in January, when Duarte formed an advisory committee that included North Kingstown Fire Chief Scott Kettelle and lawyer Vincent Ragosta, a member of the town’s Personnel Board. Of the 24 applications received, the advisory committee interviewed 10. The Town Council interviewed the top three candidates.

Patenaude, an Eagle Scout (Troop 2, EG), has a bachelor’s degree in fire science from Providence College. In Cranston, he oversaw a staff of 206 employees and a budget of $32 million. He has served on the state Fire Academy’s Fire Education and Training Board and is Incident Command and National Incident Management System certified. Patenaude is a U.S. Coast Guard licensed Master of Vessels and a member of the Port of Providence Area Security Committee. He served as an EG Fire District volunteer firefighter from 1977 to 1981.

“East Greenwich welcomes Chief Patenaude to the Town’s management team,” the town press release said. “We also extend our gratitude to Acting Chief Mears for his hard work in supervising our fire-rescue services over the past several months. Job well done!”

In an interview Wednesday, Patenaude said he loved the fire service.

“I like that every run is a different, every day is different,” he said.

Acknowledging the turmoil that’s surrounded the fire department in recent years, Patenaude said, “We need to rebuild the reputation of our fire department.” He declined to comment on specifics, including the budget, saying it was “too early” but said, “I would like to make things better and work with the guys. I think we can do a good job.”

“I’m happy with the choice,” said Council President Mark Schwager of Patenaude. “We had a lot of good candidates. He was managing a much bigger department. It’s well within his experience to be able to step right in.”

“We are very excited to finally have a permanent fire chief who resides in the state of Rhode Island and is very knowledgeable in the fire service,” said Perry. “The East Greenwich firefighters look forward to working under the command of Chief Patenaude.”

To read more about the recent history of the town and the EG Fire Department, click on the links below:

What Is Happening In East Greenwich, and Why? Part 1

What Is Happening in East Greenwich, and Why? Part 2

What Is Happening in East Greenwich, And Why? Part 3