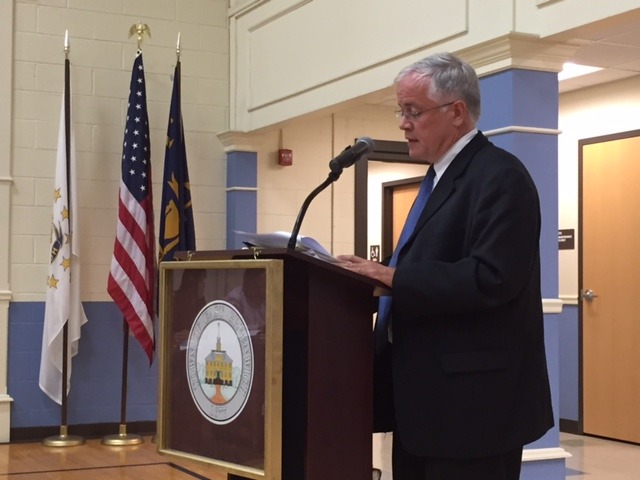 The agenda listed the “Town Manager’s Report” but when Town Manager Gayle Corrigan got up to present her report at Monday night’s Town Council meeting, she instead turned the microphone over to outside consultant Michael Walker of Berkshire Advisors of Ohio.

Walker presented a report, titled “Fiscal Impact of FY2014-FY2016 and FY2017-FY2019 Fire Department Contract Changes.” The report was a fiscal analysis, said Corrigan after the meeting. Walker did not consult Fire Chief Russell McGillivray. Rather, he focused on the numbers, she said. Bringing in the chief will come later, said Town Council President Sue Cienki.

It’s unclear how much Walker was paid for his work.

During public comment, three members of the audience questioned the placement of the analysis in the town manager’s report. Specifically, they asked if the town manager had violated the Open Meetings Act.

The Rhode Island Open Meetings Act “requires the agenda ‘specify the nature of the business to be discussed.’ The Rhode Island Supreme Court has interpreted this to mean the agenda must provide reasonably specific notice to the public, so that agenda items that merely say, for example, ‘Old Business’ or ‘Reports’ are improper.”

Resident Rick Tremble asked why Corrigan hired another financial consultant when she herself was hired based on her financial acumen.

“It seems like a self-licking ice cream cone,” he said.

During an interview last week, Cienki was asked if there would be any financial presentation at Monday’s meeting. She said no. After the meeting Monday, Cienki stood by her comment.

“The town manager is in charge of managing the town,” said Cienki. She said she learned of the presentation earlier that day. “It’s the town manager’s report. It’s information…. “

Council Vice President Sean Todd said after the meeting he only learned of the report at 6:45 p.m. “I think that every town manager does things differently. I think we never had a town manager report like that before.”

Todd deferred to Corrigan as town manager to handle the specifics of the meeting and her report.

“It’s a fiscal impact statement,” said Corrigan when asked why it was not a separate agenda item. The EGFD firefighters contract is not up until 2019.