Town Manager Search Process to Ramp Up in January 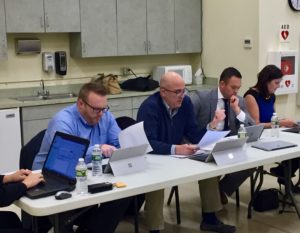 According to town officials, around 30 people have submitted applications for the Town Manager position currently occupied by Gayle Corrigan. The deadline for applications is Friday, Dec. 22.

Beyond that, the process is still being worked out.

The Town Council met before their regular session Dec. 4 to talk about the search process. Councilman Nino Granatiero laid out a timeline, including an executive session Jan. 8 to review the applications, with involvement by an advisory committee to come a little later in the process. But councilors Dec. 4 said they might want the advisory committee to be part of the process at the front end, to help with sorting through the applications.

The advisory search committee, however, has not yet been formed.

The plan has been that each council member would name someone for the committee. No names were mentioned Dec. 4 and it remains an “open issue,” Granatiero said Friday.

There was discussion of how and if to use the town’s Personnel Board, which oversees personnel policies for most – but not all – town employees. The Town Charter says the town manager is not under the purview of the Personnel Board. To Council President Sue Cienki, that meant the Personnel Board is prohibited from participating in the search process.

“This is not relating to writing personnel policy. This is an advisory role to help us do recruitment for a town position so I don’t think the exclusion applies here,” said Schwager Dec. 4. “There is also a provision that they are able to take on any task if requested to do so by the Town Council. So I think this falls within their purview.”

“In my opinion, the charter clearly does not put the Personnel Board in the position of having anything to do with the town manager because that position is not part of the personnel system,” Town Solicitor David D’Agostino said Friday, in response to Schwager’s analysis. “Because of that, I don’t think the board can perform a duty requested by the Town Council that it isn’t authorized to do by the charter.”

The town manager search, he added, “is outside of the scope and coverage of the Personnel Board.”

Another aspect of the search process under discussion is how best to keep the interview process confidential, at least in the early stages, out of deference for the candidates, who may not have told their employers they were applying to other jobs.

“We need to be highly, highly sensitive to confidentiality. Even things like walking in and out [of interviews]. We’ve still got to figure that out,” Granatiero said. “We have to be very discreet with this. I don’t want to see anyone getting in trouble.”

Cienki said North Smithfield hired a new town manager recently and the final three candidates were told their names could be released to the public.

Granatiero said the hope is to hire someone who could overlap with Town Manager Corrigan for an easier transition. Corrigan has a one-year contract that is up the end of June. No word yet if she is among those who have submitted an application so she could stay on as town manager.

You can find the town manager recruitment file here.