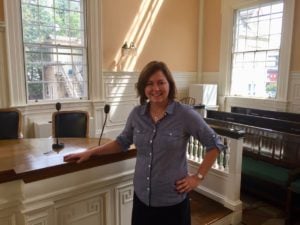 Town Councilman Nino Granatiero has been charged with putting together a hiring advisory committee for town manager even as Town Council President Sue Cienki has said she wants current Town Manager Gayle Corrigan to finish her work implementing the so-called “One Town” approach. Granatiero said it will indeed be a search.

“It’s not an exercise. It’s not a show. I would never have agreed to lead the search if it was just a show,” said Granatiero. “I truly believe that the town deserves a good search for a town manager.”

When Gayle Corrigan was first named acting town manager by the Town Council last June (following the swift, surprising departure of then Town Manager Tom Coyle in what was termed a mutually agreed upon separation), Town Council President Sue Cienki promised to initiate an immediate search for a new town manager. But days turned to weeks turned to months. During that time, the Town Council voted to drop the “acting” from Corrigan’s title.

A month ago, Cienki said there would be a search but she wanted Corrigan to first finish her job. Corrigan has a one-year contract with the town in her role as town manager. She was hired in June.

At the Town Council meeting Oct. 23, Granatiero formally took on the job of managing the search process, including overseeing a five-member hiring advisory committee to be comprised of one recommendation from each council member.

Granatiero said the long lead time for the search will enable the town to potentially hire someone who could overlap with Corrigan. Or, he said, the council could hire Corrigan if she decided to apply for the post, in which no transition would be needed, he said.

“We didn’t have the luxury of a search last time,” he said, referring to Coyle’s speedy departure. “If someone new is going to come in, obviously you want a transition. If, when the search is completed, and Gayle emerges as the top candidate, then no transition needed. If not, we want that time for an overlap if possible.”

Granatiero said he had not yet talked to Corrigan to see if she was interested in applying for the job.

“Our town deserves what we told them we were going to do,” he said, referring to doing a search. “If, at the end of the search, it’s Gayle Corrigan, then OK.”