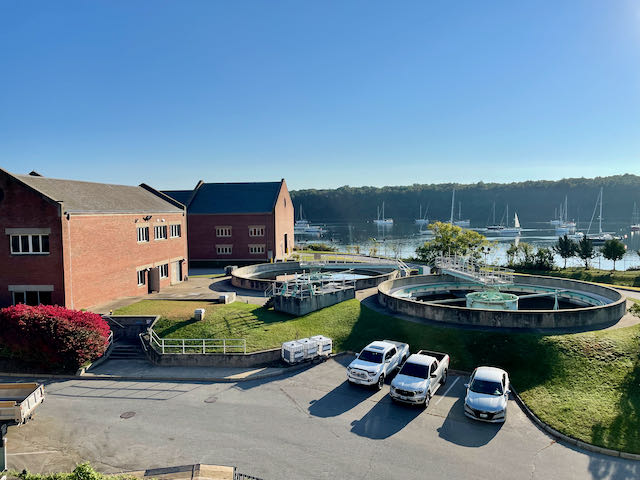 Above: More than $1 million of EG’s American Rescue Plan money could go toward equipment replacement at the town’s wastewater treatment plant.

It sounds fantastic – an unplanned $3.92 million cash infusion for the Town of East Greenwich through the federal American Rescue Plan. And town officials do think it’s great. But the money can’t be used for anything the town wants. Expenditures need to follow federal guidelines.

At the Town Council meeting Tuesday night, Town Manager Andy Nota outlined how he thinks the town should allocate the money, with most of the dollars going toward unglamorous projects like improved ventilation in town buildings. It’s kind of like that $20,000 you might spend to re-reroof your house instead of buying all new furniture.

“This is not free money. It is heavily, heavily restricted,” Nota said. However, he added, “this will allow us to catch up in strategic areas…. We think this is really a godsend to move some of these things forward.”

He said this was an overview of the proposal, with plans to dig into the details in coming weeks and months. The town must submit a plan to the federal delegation by April 30, 2022.

You can see the full proposed list HERE (which includes money from bonds and the town’s capital budget). But here are the big picture items and the ARP dollars attached to them:

Town Councilor Mike Donegan asked about ARP money being used for the wastewater treatment plant, since only part of the town is hooked into the sewer. The work on the plant – a replacement of the UV disinfection system – must be done, Nota said, and done soon, but that replacement could be bonded and paid for by sewer users alone.

Councilor Renu Englehart was more inclined to use ARP funds, saying that the treatment plant was important for the town as a whole.

“I feel it affects more than our ratepayers, it affects our businesses and our cove,” she said.

Also at the Town Council meeting Tuesday, Councilor Mike Zarrella asked Nota about the state of the turf field at Carcieri Stadium at the high school. The field was built in 2010 and it was clear from the start the turf would need replacing at around the 10-year mark, at a cost in the $1 million range. Zarrella said athletes were getting injured on the field and he wanted to know if the town could do something to expedite the turf replacement.

Nota said he and Community Services Director Andy Wade had been looking into the issue. While Carcieri Field appears to be a school property, the land on which it sits was given to the town by the state, and Nota said it was unclear who exactly “owned” the field. He said they would continue their research.

In another bit of news from Tuesday, Nota said Andy Wade had hired Erin McAndrew to serve as Senior Center manager, replacing the departed Charlotte Markey. McAndrew is a familiar face in East Greenwich, having served in a similar capacity until taking a job in North Kingstown in 2018. She is set to start back in East Greenwich the last week of October. Welcome back, Erin!