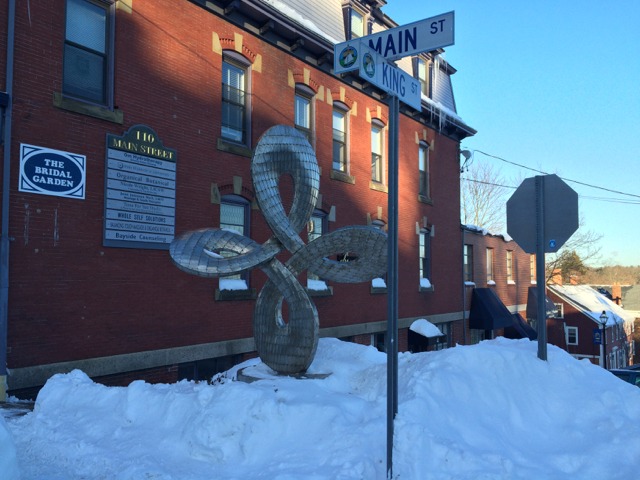 Town Manager Tom Coyle tends to think of worst-case scenarios. With that in mind, he was not unhappy about the way the storm played out in East Greenwich Tuesday. Most
of all, he was grateful the power stayed on.

“Thank goodness we didn’t have to cross that bridge. Nobody lost power so they didn’t open the regional shelters. We didn’t have to deal with transporting people to shelters,” said Coyle. Or sheltering people here in East Greenwich (they would go to Swift).

Instead, the town just had to deal with snow – that’s all. Lots and lots of snow.

East Greenwich got 17 to 18 inches of snow during the blizzard that struck the region Monday night into early Wednesday. Town plow trucks were on the road starting early on Monday and were still on the road Wednesday.

Coyle – who spent Monday night on a cot in his office at Town Hall – went out on one of the plow trucks, with Public Works Director Joe Duarte and Highway Supt. Jim Fogel.

“I wanted to see firsthand what was going on,” said Coyle. “West of Route 2, it seems they got more snow.”

He said he was pleased with the snow removal job and grateful for the drivers who worked so hard. Now he was looking forward.

After a big snow storm, the town will set aside a night to get all the snow off Main Street, which now has tunnels for sidewalks and reduced parking. Coyle said they were going to work Thursday night into Friday but with possible snow Friday, he said they will probably wait a few days.

“If I have the guys come in at 11 o’clock Wednesday and they stay until 7 Thursday, they’re going to be wiped. I mean, they’re wiped now,” he said, referring to the public works employees who’ve been plowing the streets.

“They are going to be working tonight too because we’ve got to prep all the schools, all the walkways,” said Coyle Wednesday. School were closed Tuesday and Wednesday but are due to reopen Thursday.

With all this snow, though, Coyle realized some people might feel snow removal wasn’t complete enough.

“I’m sure there are going to be complaints,” he said, “but overall I think we were successful.”