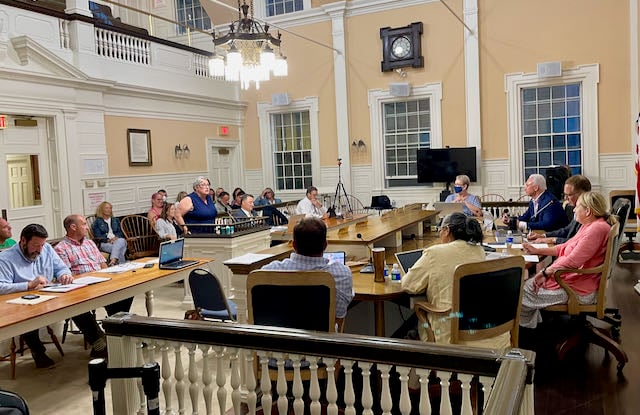 The reasoning: councilors said the ask was not needed immediately and by December both the town and the schools would have a clearer picture of how fiscal year 2022 settled out. East Greenwich operates on a July 1 start to the fiscal year and it takes time for all the bills to come in and be paid, etc., before finance officials can be sure about surpluses or deficits.

The request came after a very tumultuous June, when the town approved its budget giving the schools $500,000 less than they had asked for. Then town and school officials learned the school district would be getting $729,000 less in state aid than had been anticipated for months. After extensive lobbying from town and school officials and local state legislators (Rep. Justine Caldwell, Rep. Evan Shanley, and Sen. Bridget Valverde), the General Assembly reduced the cut to $581,000 (a savings of $148,000). The School Committee voted to fill their budget hole from fund balance (aka surplus) versus making significant programmatic cuts, but that meant the school district was starting FY2023 with a $1 million hole.

As Committeeman Gene Quinn said, when it comes to the budget the district is only allowed to ask the town for 4 percent above what they got the previous year. If they use $1 million out of surplus for operating expenses, those expenses will be there the following year but there will be no additional money in the budget to pay for them, so that money would have to fall within the 4 percent increase (alternatively, they could use surplus but that money would probably dry up if tapped significantly on a yearly basis). The challenge with that is that budget requests are almost always ascendent. Costs go up. Especially during inflationary times like these.

Town Council members Monday night appeared to be sympathetic to the School Committee but more willing to follow the recommendation from Town Manager Andy Nota that both parties wait until December.

“As I look at this request, it seems to be more forward looking,” said Town Council Vice President Mike Donegan. “It doesn’t mean we shouldn’t consider it and I think we should.” But, he said, “If the school district runs the budget as Andy [Nota] said, there will still be a surplus. What Andy suggests is we wait until it plays out… that makes sense to me.”

Council President Mark Schwager acknowledged the late-breaking news from the General Assembly was “an official’s worst nightmare,” adding, “I certainly understand the pressure they’re under.”

He, too, landed on the wait-and-see position.

“We’re not going to make a quick decision. We’re going to make the right decision,” he said. “I also would concur that we continue this request until our meeting in December.”

Still, second grade teacher Donna McPhee, who is president of the teachers union, implored town officials to give the schools more money to help with teacher labor contract negotiations. As the town settles labor contracts with its unions and police and firefighters received a 3 percent raise, McPhee was, in essence, saying, How about us, how about the teachers?

“After the past two years, we thought, surely this is going to be our time. We’re going to be as highly regarded as other employees in town,” McPhee said, who was at the meeting with a dozen colleagues. “I’m going to challenge the town to do better for us. To figure out a way to make it happen.”

Town councilors said there was a hard rule about town officials interfering in school contract negotiations.

When it came to a vote, all five councilors – in addition to Schwager and Donegan, Councilors Caryn Corenthal, Renu Englehart and Michael Zarrella concurred; the vote was 5-0 to continue the issue to December.