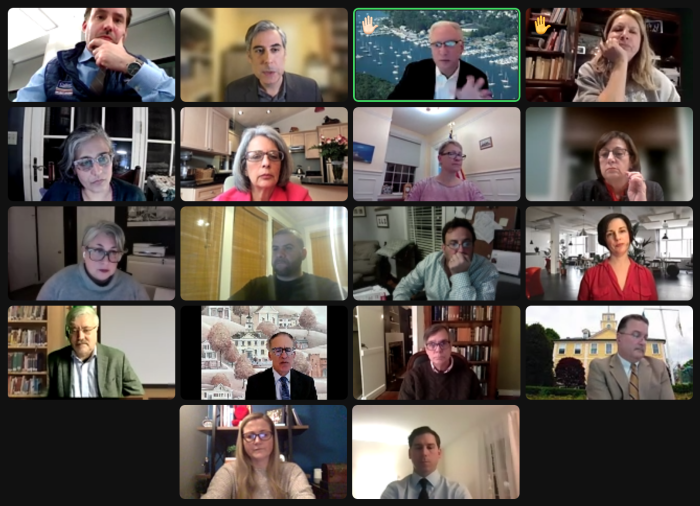 Depending on which direction the town decides to go in, voters could be asked to approve a school construction bond anywhere from $21 million to as high as $130 million, according to options outlined Monday by EGSD consultants overseeing the school construction planning process during a virtual joint meeting between the Town Council and the School Committee.

If the projects were timed right, the state would pick up at least 35 percent of the tab but the percentage could go as high as 52 percent depending on the option chosen.

While the consultants – Colliers Project Management – have been working with the school district for years now, this was the first time school and town officials heard the potential cost involved. Any bond referendum is still a ways off, according to officials, possibly in the first half of 2023.

In terms of what work needs to be done, the list is long, ranging from basic maintenance – roofs, HVAC – to the possibility of one or two new elementary schools, as well as significant renovations at the high school. As Colliers pointed out during their presentation Monday (which can be found HERE), five of the district’s six school buildings are 50 years old or older – Eldredge is the significant outlier having been built in 1927. Cole Middle School was built during the district’s last big construction push in 2009-11.

Yet another consideration is that learning practices have changed in the decades since most of the EG public schools were built. New practices call for more collaborative spaces as opposed to only classrooms with rows of desks, Manuel Cordero has explained in previous School Committee meetings. Cordero, of the architecture firm CIVIC, is working with Colliers.

Here are the options as presented Monday:

Preliminary work has uncovered what was referred to as “unsuitable soils” at Hanaford making it much more costly in terms of new construction. Eldredge, meanwhile, is a historic building with no easy way to add on. New construction, if approved, would be on the Meadowbrook or Frenchtown properties, Colliers said, most probably Frenchtown, where there’s a lot of room and it would be possible to build a new structure while still using the old building.

None of this happens without the Town Council signing on to it, since it would be the town that secures the funding. On Monday, Councilman Mike Donegan had questions about the timeline and the validity of the demographic studies.

“The timeline is daunting if the Town Council is supposed to act in September,” he said, referring to the need to get the plan to the state Department of Education for approval in order to qualify for the reimbursements. It would be only after that point that a bond referendum would be contemplated.

“Demographics is an art and a science,” said Manuel Cordero. “In the planning, districts and their consultants can also build in capacity to absorb whichever way the demographics are going…. Can we design for a little bit of flexibility in our buildings that allows for bubbles? Yes.”

Donegan also asked how the district might respond if a bond referendum did not pass – what could the district accomplish on a pay-go basis.

There is a way to structure your projects so you could go ahead with some of the work without a bond passage, Manuel said.

Still, said Chris Speigel of Colliers, “The only way these projects happen is if everyone is rowing in the same direction.”

After the meeting, School Committee Chair Anne Musella said, “We have to be able to work together.”

She noted Town Manager Andy Nota’s attendance at a number of school finance and facilities subcommittee meetings as a positive sign, as well as involvement by Nate Ginsburg, chair of the EG Planning Board.

“We’ve talked to Colliers to make sure the right people are in the loop for effective collaboration,” Musella said. She mentioned the collaboration taking place right now over replacement of the high school artificial turf field.

“The turf field – that’s the kind of coordinated effort that should happen.”