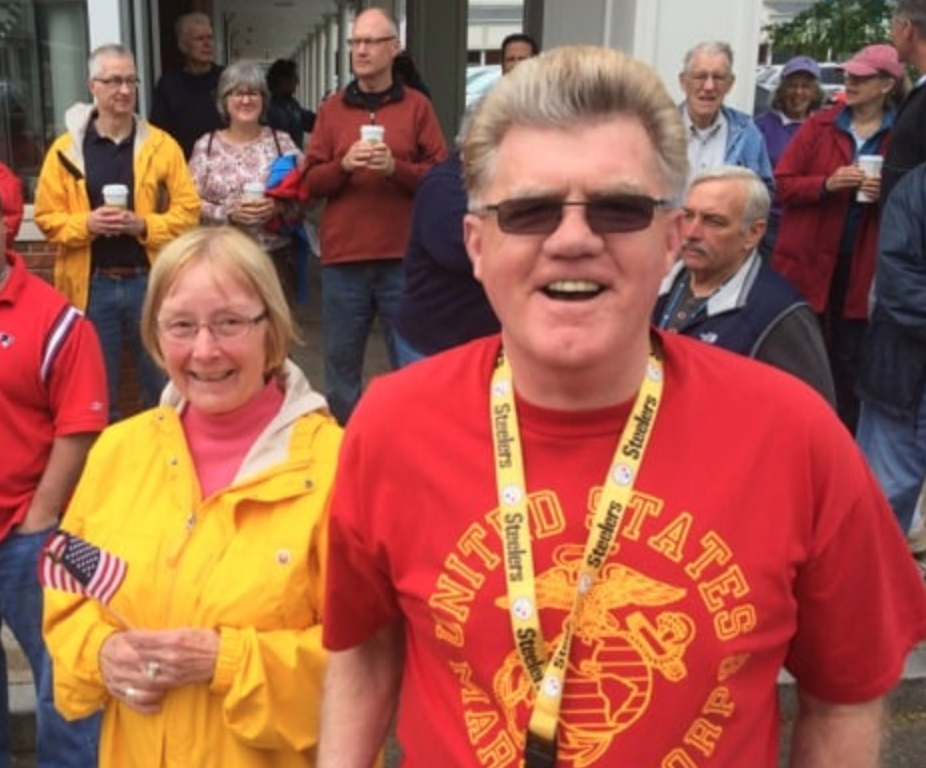 Above: Tom and Janet Joyce at the Memorial Day Parade in 2014.

Tom Joyce made it his mission to bring coffee to his wife every day during her many years as teacher and director of the Barbara Tufts Co-op Nursery. He was devoted to Janet, which meant building his life away from his beloved Pittsburgh so he could be with the girl from East Greenwich who he met while stationed at Quonset with the Marines in the early 1960s.

Tom died Monday, Nov. 27, at the age of 82 (see his obituary HERE). He spent 48 years as a police officer in East Greenwich – an extraordinary stretch in this era of 25- or 30-year police careers.

“For a guy to stay at one department for 48 years, that’s pretty rare,” said Police Chief Stephen Brown. “He was a great guy. He always spoke his mind. He was really fair. And he loved that position of juvenile officer.”

“Tom will be best remembered as the town’s longtime juvenile officer where he worked tirelessly to create programs and an atmosphere of support for our youth,” the EGPD Facebook page posted.

Tom Joyce was the town’s first juvenile officer. According to Bob Houghtaling, director of the East Greenwich Drug Program, who worked closely with Joyce for nearly 30 years, Tom helped establish the juvenile system and the Juvenile Hearing Board in East Greenwich. The JHB allows young people who get in trouble to stay in town rather than face the state family court. It’s a system still in place today, where youths are held accountable but able to make things right, usually through community service.

Tom was a regular at the Teen Center. “He volunteered every Friday night for decades. That was a pretty big commitment,” recalled Houghtaling. And he helped out at Safety Town, a program for children about to enter kindergarten.

John Carter, who succeeded Tom as the town’s juvenile officer, said Tom was instrumental in getting him interested in working with and advocating for youths. “He wanted to get them on a good track,” said Carter. “He knew it was the younger generation who was going to take over.”

“Tom was the most eccentric, wonderful man ever,” said Steve Beadle (EGHS Class of 1972), who worked as a police officer in East Greenwich until 1994. “He was the ultimate professional. He wanted things done correctly. His Marine Corps background made him disciplined and professional.”

Tom was Beadle’s first sergeant and a mentor. “Tom was always there. He always had our backs,” said Beadle, who now lives in Baltimore. “It was the way he interacted with people. He was really good with people…. What a spectacular man!”

Besides work and family – Janet, his daughters Jennifer, Pam, and Joanne, and his in-laws Ed and Mildred, for whom he helped care for many years – Tom had another big love: football. He was devoted to the Pittsburgh Steelers, getting to at least one home game every year. His basement was covered with Steelers paraphernalia, which he happily toured visitors through.  But all football was good football to Tom. In the 1960s, Tom played on the East Greenwich Townies football team, as quarterback and punter. “He was a very good punter,” said Bruce Mastracchio, a teammate. And he would routinely attend local high school football games.

Tom was only in the Marines for a few years, but once a Marine, always a Marine, and the lessons learned there in terms of his appearance were hardwired in. There was, of course, Tom’s famous head of hair, high and tight – the Marine way – in the 1960s. Then in later decades a wave of reddish-blond hair that swooped over the top of his head like a crown.

“I hope when I reach my 60s my hair looks as good,” joked former EGPD Chief Dave Desjarlais. “When I took over, Tom had been on the job longer than I had been alive.” Desjarlais was 35 when he became chief. “It was a pleasure to work with the man.”

Echoing others, Desjarlais said, “Tom had his way of doing things. He wanted his autonomy working with juveniles…. He lived in town and he knew the kids. He knew what would work.

I think he did a fantastic job.”

“He just enjoyed the department,” said Chief Brown. “If he could have stayed another 48 years he would have.”

But Tom has left the building, joining his beloved Janet, who died in 2020. Semper fi and Godspeed Tom. Larry Campion and Tom Joyce on the occasion of Tom’s being made a lieutenant. Submitted photo 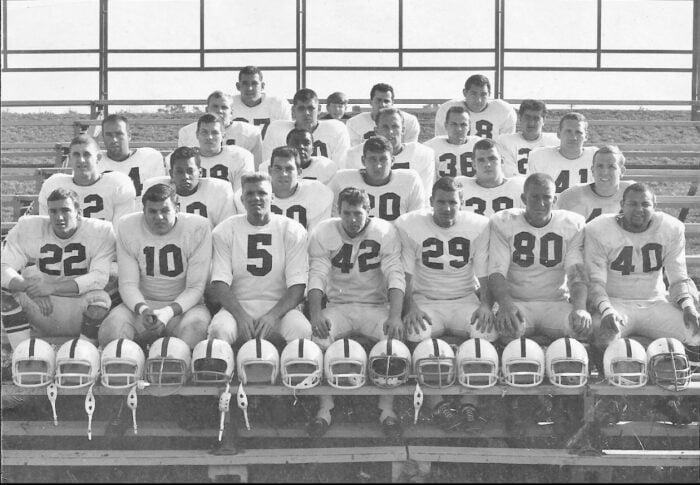