TogetherRI Dinner: ‘Things Can Happen When People Get Together’ 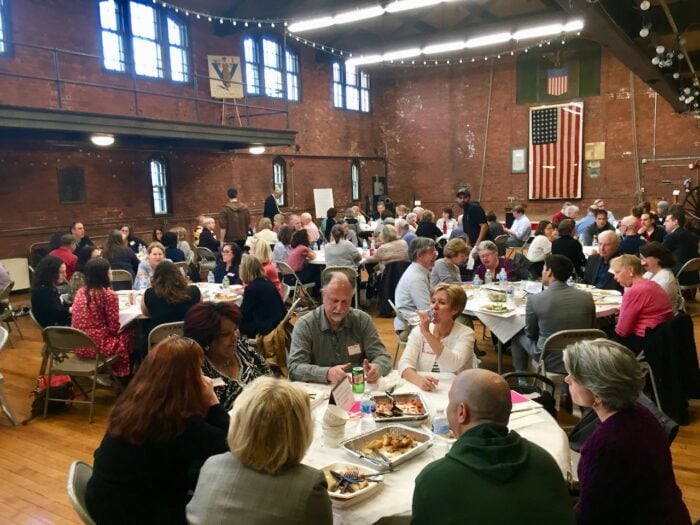 Above: Residents of East Greenwich and nearby communities gathered at the Varnum Armory for a community dinner put on to foster communication in May 2018.

If there was one common thread during Tuesday night’s East Greenwich–Warwick version of the Rhode Island Foundation’s Together RI community dinner, it was the desire to make things better in Rhode Island.

Just how to do that ran the gamut – everything from legalizing marijuana and improving skills training to consolidating services across municipalities and capitalizing on the state’s history and natural beauty.

Around 90 people came to the Varnum Armory on Main Street for a free meal of pasta and chicken and the opportunity to sit at a table with seven possible strangers. This was the 18th of 20 planned dinners, and it was lively. While the TogetherRI team provided tables with discussion questions, there was no dearth of conversation. 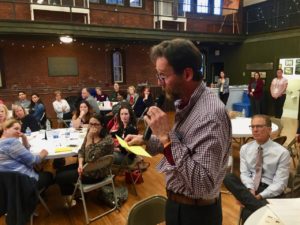 EG resident David Schaller shares what his table talked about.

At one table, having to pay for beach parking was an affront. At another, people were singing the praises of the democracy class offered at North Kingstown High School – a pass/fail class that teaches students about local, state and national governments.

Not to say there wasn’t frustration. People spoke out against political corruption and high taxes.

But a love of Rhode Island shone through. 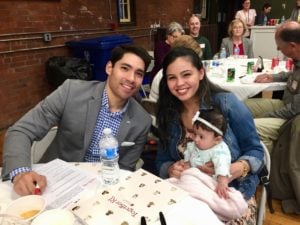 Luis Daniel and Kelly Munoz and their baby daughter Juliet-Daniela, who was designated the youngest TogetherRI attendee so far. Luis, who lives in Warwick, is running for governor.

“I feel there’s so much in the state to celebrate,” said one participate. “What can we do as a state to offset all the negativity?”

Donna DuFault of East Greenwich praised the event, saying there weren’t many opportunities for this sort of conversation.

David Abell, also from EG, said he valued being able to “have a discussion without it being politicized.”

“The synergy in this room is amazing,” said a Warwick woman.

And EG resident Jeff Keithline said, “Things can happen when people get together.” 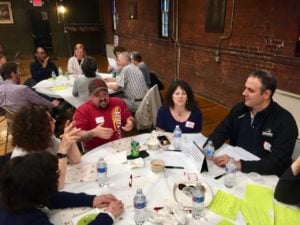 RI Foundation President & CEO Neil Steinberg said the vibe at the dinners has been consistently positive. Attendance has ranged from 40 people to 120. But overall numbers didn’t matter as much for those in attendance, he said.

“The whole key is, it’s at your table,” said Steinberg. “So whether there’s 3 tables or 10 tables, the action is at your table of 8 people. That’s where the discussion goes on.”

He said they plan to roll out some big-picture takeaways at the foundation’s annual meeting May 24, with a more detailed analysis to follow.

“We hear repeatedy that the size of the state is both a strength and an opportunity. It’s like, with our size, why can’t we all get together and do this, or do that?” he said. “The dinners have definitely tilted positive. We wanted civil and civic dialogue and that’s what we got.”