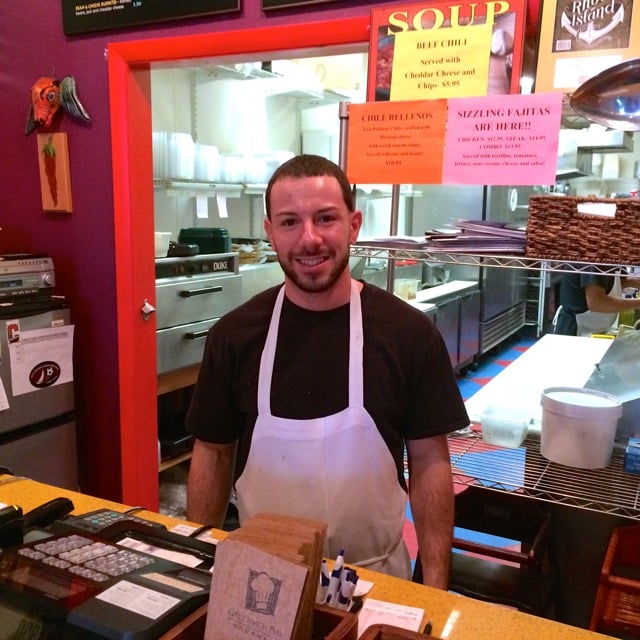 Ross DiSegna is the new owner of Tio Mateo’s/Greenwich Bay Gourmet, but he’s not new to the business, after nearly four years working there. That made it easier for Dana and Matt Wronski to sell it to DiSegna. After all, it’s been their baby. For 10 years, the Wronskis have been the face of Tio Mateo’s. Actually, they’ve been preparing food for us in East Greenwich for longer than that, having started with Greenwich Bay Gourmet on Cliff Street in 2000.

DiSegna’s been part of it all along, on both sides of the counter.

“I’d been a customer since they had Greenwich Bay Gourmet across the way. I would come in when I was a kid,” said DiSegna, who grew up in town and graduated EGHS in 2005. “I had previously worked at my uncle’s bakery for 11 years. But going into work at 3 in the morning wasn’t easy while going to college full time. So, I decided to leave and find a job with hours more suitable. At the time my sister worked [at Tio’s] and said they needed someone. So I came in and talked to Dana and the next day I was behind the counter.”

After he graduated from Johnson & Wales – with a duel degree in culinary arts and food service management – the Wronskis made him manager.

“A year ago, I told them I was interested in buying the business when they are ready to sell, and to let me know first,” DiSegna explained. “Three months after that Dana got the job at Beso’s. After she was there for 2 or 3 months and really liked it, they both sat down with me and asked if I was serious. And here we are.”

Dana Wronski took over management of Beso’s in March. Meanwhile, Matt has ramped up his photography business in recent years. As much as they enjoyed the convivial Tio’s atmosphere, they were being tugged in different directions.

“I’m excited about taking over,” DiSegna said Monday, after the Town Council approved transfer of victualing and liquor licenses for the restaurant. “I like the people I work with and I’ve made friends with all the regulars who come in. I want to continue to give the community the good food we’re known for.”

That said, DiSegna plans to try out some new dishes, but will tread lightly. After all, some things are sacred. As Town Councilwoman Sue Cienki called out after the vote Monday night, “I’ll be in for some guacamole!”