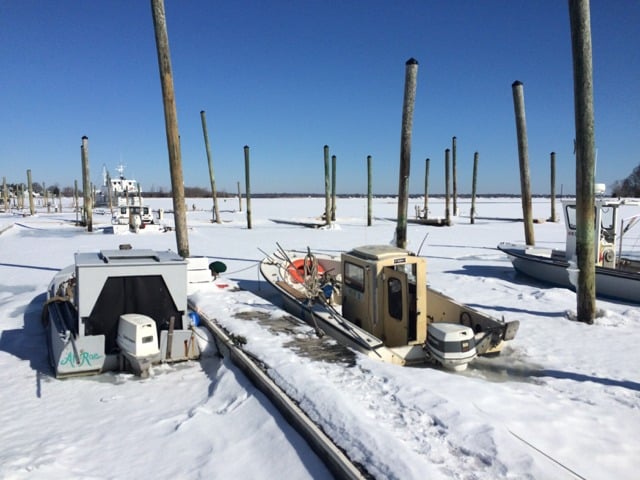 This winter’s unrelenting cold and snow have been hard on everyone, but in our area it’s been hardest, perhaps, on the quahoggers and those who buy their product.

“It’s been the winter from hell,” said Bob Smith, owner of R.I. Clam Company on Water Street. “We’ve had some turbulent winters throughout my 40 years, but this has been terrible. For the first time in many, many years, we have had week after week of absolutely no supply.”

Of the quahoggers themselves, he said: “Some of these guys are going three weeks to a month with zero income.”

In a typical winter, he said, R.I. Clam Co. has “product” coming in every day. Because Greenwich Cove is usually the first area of the bay to freeze up, quahoggers will move their boats to open water. This year, while there are a few boats still working on a daily basis – mainly out of Warwick Cove – there are only a few.

One of the many out of work quahoggers was Bob Pinder, who on Saturday was trying to loosen the ice around his boat as it sat “docked” in Greenwich Cove.

“This is the worst I’ve seen it,” said Pinder, who’s been quahogging for 20 years. “It’s about as bad as it gets.”

Pinder said he was hoping to free his boat enough to pull it out of the water and move it to open water but, looking at the ice-encased boat ramp, he spoke doubtfully.

“I think we’re just plain screwed until it melts,” he said.

The U.S. Coast Guard has been trying to help out by breaking up the ice where it can and was a Coast Guard boat was in Greenwich Bay on Thursday, said Edward LeBlanc, the Coast Guard’s chief of waterways management for Southeastern New England. But there was a limit to what they could do.

“Our vessels are too big to get into Greenwich Cove or Apponaug Cove, so we couldn’t get in there,” said LeBlanc.

In hindsight, said R.I. Clam’s Smith, it would have been smart to have a fund set up to pay for a cutter to help in years like this.

“A lot of this weather is cyclical. We’ve known some really warm winters … now we aren’t used to this,” he said.

Even though it’s now March, the situation isn’t going to improve soon, said Smith. The ice is a good foot thick.

“If we’re going to have to depend on that ice to melt before these guys go back to work, it’s going to be some time. We’re still building ice on the cove. The end is, realistically, not in sight.”

The only good thing is that everyone’s in the same situation, Smith said.

“We’re all in the same boat, but that boat is wearing thin.”