November. An orange,brown and maroon month. Pilgrims and Indians. The time of one

of my favorite holidays. It seems to get pushed to the back burner lately as people start getting ready for Christmas way TOO early!

For this story we once again go back to Greenwood Cove, which is East G’s alter ego, and we depend on Brian McCormack, and his friend, Kip Lovell, to give you a story that is the twin to “The House Without a Christmas Tree, Almost.”

Brian’s mother had decided that funds were scarce this particular fall. She had to save and scrimp and felt for Thanksgiving dinner she would have to serve chicken instead of turkey. She wasn’t even sure they could afford a tree for Christmas, and food came first in the McCormack household. The dinner was more important than having a tree. 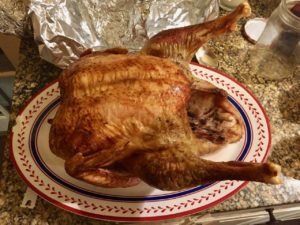 He called Kip up and they discussed the situation. They put their heads together and plotted their course of action. The next morning was black as pitch at 4 a.m. The boys met at the corner of Spring and Main and rode their bikes to Howling Wolf Road. Brian had his 25 lb. pull bow, Deer Killer, and some new razor edge arrows while Kip had his trusty .22 rifle and an old turkey caller.

When the got to Howling Wolf Road, they hid their bikes under a bush and walked an old Indian path into the woods, stepping carefully to avoid making too much noise.

They stalk-walked about 500 yards into a small glade. It was known to be a favorite haunt of one of the turkey tribes in the area. There were bushes all around, and some of them were used as turkey blinds. Brian and Kip snuck quietly into one of them.

It was surprisingly roomy, and comfortable, and there were areas to fire a bow, or, a rifle, out of it. It was still dark and cold, and the boys shivered some as they waited for the gray light of early morning.

“As soon as it gets gray light,” Brian said, “those turkeys are going to fly in. They’ll hold back on the edges, or in the branches, and when they think it’s safe then they’ll come on in. Let me get my arrows out first and when I hit you, you shoot your rifle. Shoot at their heads like you are shooting at small birds. I have to aim for the chest. Got some new razor sharp points for this.”

The boys kept quiet and watched and waited. Brian took the turkey call from Kip and wafted out some hen calls and then a gobbler, calling for his lady friend. Brian knew not to overdo it. When the turkey was coming to call, he’d come.

Soon the turkeys appeared. They floated in like ghosts walking across the early morning grass. First the glade was empty. Next it was filled with turkeys. Some previous hunters had salted the glade with corn and the hens came in bobbing and weaving sucking up the corn as they came closer and closer to Brian and Kip.

Then! The chief came in! He was big and when he spread out his tail and wings he looked like a monster! He came on herding his flock and edging closer and closer to the boys’ blind.

Brian knelt in the shooting position. He drew his arrow back to his ear and let it fly. It struck the big, male turkey right in the chest and he staggered and went down shrieking out his death cry! Brian punched Kip. Kip brought the .22 up and started firing.

When all was clear, Brian looked out. The big male, a smaller male and a hen were pierced with his arrows. Two smaller males and two hens were down courtesy of Kip’s bullets.

When you add in the Thanksgiving Day football game against the Schooners of Fordwick High, and the extra fixings and desserts that the womenfolk would be putting out – why, what could be better than that?

Thus another holiday disaster was averted by the abilities of Brian and Kip, who could be faced with a problem and come up with an answer time after time.

Happy Thanksgiving to all!

Bruce Mastracchio writes about the glory days of East Greenwich and his adventures. You can reach him at [email protected]