The Season of The Brush, A Story of High School Football, Part Two 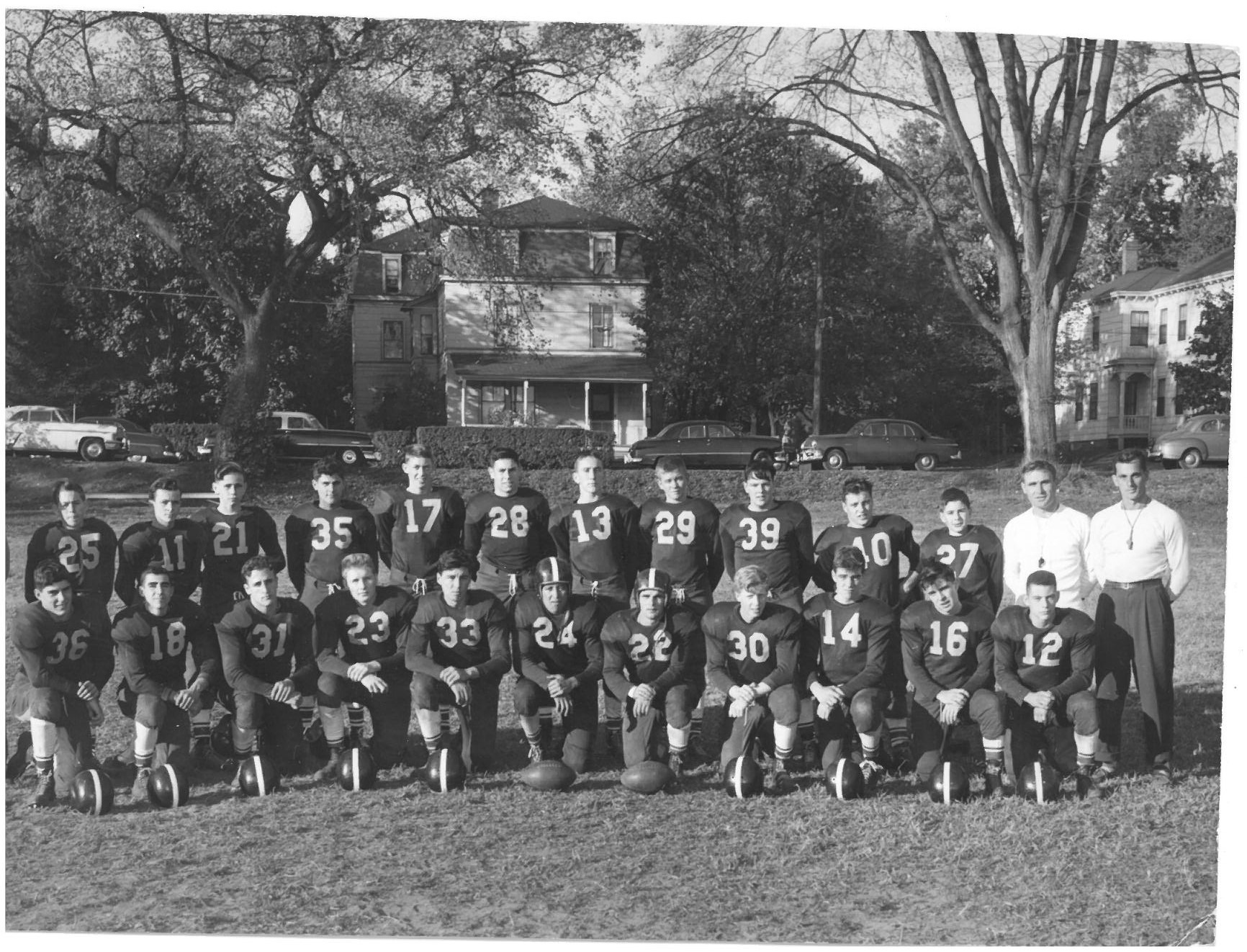 EGHS team picture from !953 with Coach Iannazzi and Coach Carcieri, at Academy Field.

Today’s story is the second part of a tale about high school football here in EG during the 1950s. I will retreat to my mythical Greenwood Cove for this story to protect whomever needs protection. The story is true and those involved will figure it out. The rest of you can “project,” I am sure.

And, with no further ado, I give you Part Two of “The Brush” (you’ll find Part One here):

The Greenwood Cove High School football team would start its season in early September in the Round Robin. Their opponents would be the Metro High Lions from Class B. Next would be a non-league game versus the Forestdale High Horned frogs, a Class A team. Then league play would begin with the Barringer Bullrakers followed by the Warham Wampanoags (Wamps for short); Colt High Ponies; South Kingstone Sachems; Mapleville Mustangs; Reservoir Lakers; and the Voke Tech Builders, before the traditional season ending Thanksgiving Day finale against their most hated rival, the Schooners from neighboring Fordwick High School.

Just when it seemed that the practices were paying off and The Bull had his lineup set – disaster struck! Eight starters from the previous season were declared ineligible, either for not registering, or for failing grades the previous year. Unlike down south or in Texas, academics came first at GCHS. You had to pass to play – teachers did not give breaks to errant students!

You had to earn your grades!

Still Coach Bull, due to the recent success of his gridders, had more candidates than ever. Thirty-nine prospects had reported for early practice. Losing eight still gave him his biggest squad ever and when school started he would pick up a few more. The Round Robin game gave the whole team reason for optimism. Nunzio proved a good replacement for “Quackers” (see Part One) and the “Hauggers” took the Round Robin contest 13-6 over the Blue & Gold Lions.

Brian McCormack and his buddies Nunzio Grazano, Vinny Venuto and Gil Barker had paused, before the game, at “The Brush” – a hair brush used by players the previous unbeaten season that the friends had put in a wooden box and, for good luck, buried in the wall that ran along the front of Greenwood Cove High. They stopped again after the game to give thanks for the win, feeling their prayers were answered.

The same ritual was practiced again the following week against the Maroon & Blue clad Class A Horned Frogs. The team felt pretty good after tying the bigger school 6-6.

Then disaster struck – again! Big, bad Barringer High beat GCHS 26-19 in the first league game. The loss to the Blue & Silver Bullrakers came in front of one of the largest opening day crowds in school history. All this happening despite a 19-0 halftime lead by the home team, and one of the Bull’s most impassioned half-time speeches, where he called up the ghosts of the past, and implored his charges to “not let this old, red hat down!” taking off his well-worn coach’s hat and waving it to the skies.

The heavily fired up Hauggers then proceeded to go out and blow their seemingly insurmountable lead, tanking their first league game, and leaving coaches and team and town stunned beyond belief.

But the worst was yet to come! The team lost to an easily beatable Warham Wamp outfit 6-0 when Brian, in at sub at defensive back, accidentally tackled WHS star Ray Gomes by the face mask, a part of the equipment that was recently new. The penalty set the Wamps up to score the games only TD.

Next came the Colt High Ponies, the league’s roughest, toughest, dirtiest team. They rolled over the Hauggers 35-14 behind their two speedy stars, Rollerball Rodriques and Mnny Almeideira.

Greenwood then lost to the South Sachems 27-0 and the Mapleville Mustangs 18-0 before stopping the skid when Nunzio scored a school-record five TDs in a 35-0 blanking of Reservoir High. The Hauggers got back a little more respect by crushing VokeTech 40-0, with Brian registering his first high school touchdown.

Still the league record was an abysmal 2-5 , 3-5-1 overall with the Turkey Day game coming up.

Religiously the boys kept up their tradition of praying at The Brush before each game, and though that ritual had seemingly failed them, they kept at it.

The Thanksgiving Day game was a new start. A new season. A win over the Schooners on that hallowed day would erase any and all pain from the rest of the season.

The game would be against their hated rivals, the Brown & Orange of Fordwick High, the Schooners, who Greenwood Cove had owned in the last few years, winning the last four straight Turkey Day contests over the much larger school from “down the road.”

Not only was it the biggest game of the year, it would be played before the largest crowd with, normally, 5,000 to 6,000 people showing up to watch the “bragging rights” game.

The annual struggle began at 10 a.m. Despite their holiday winning streak, the football gods were not favoring Greenwood this day. The bad luck that struck in August struck once again!

Star halfback Nunzio Grazano played his worst game of the season and the Schooners ended their four-year drought with a 24-0 victory.

Brian could not wait to get out of the locker room after the game. He raced through his shower and toweled off quickly, threw his clothes on and beat Nunzio, Gil and Vinnie out of the building. He came around the front of the school and headed toward the wall.

He tore down the stones that encased their sacred object – the source of their superstition and hopes and dreams.

He took the wooden box in his hand and raised it high above his head and smashed it down hard against the rocks. The wood casket easily broke apart and out tumbled The Brush.

Brian picked it up and looked at it briefly. This plastic and hair god to which he and his friends had pinned their hopes, stared sightlessly back, a mangle of old hair, and dirt, and lint.

Brian turned and heaved the brush across the street into the tangle of tress and bush that marked the entrance to The Bleachery Pond, another hallowed spot of his growing up. Then head down and tears beginning to flow, he started the two-mile trek back to his house and his room, where he would rest his head that night and dream other dreams as the young are want to do. As we all are want to do. Dreams where you do not lose and the gods of sport smile down and favor you with the Golden Crown!

People from that team picked up and went on. Greenwood followed that season of  “The Brush” with several successful seasons. Fordwick did not beat Greenwood on Thanksgiving Day for another 20 years and Brian’s last two years ended in victory against their hated rival.

Quackers lasted only two years at Oregon State. He came back to Greenwood and ended up as Police Chief of the town. Nunzio became a very successful businessman. V-Volt became an insurance salesman and Gil took up the trade of the team’s nickname and became a quahaugger.

One of the younger players of the team, the quarterback, went on to become governor of the state.

Another went on to follow in the footsteps of The Bull and become a high school football coach and a pretty decent writer.

Writer’s note: Yes, folks. It is all true. All happened right here in Greenwood Cove. Another story from old East Greenwich, where magic ruled, the days were 28 hours long and the weeks had 8 days. Hope you enjoyed it !