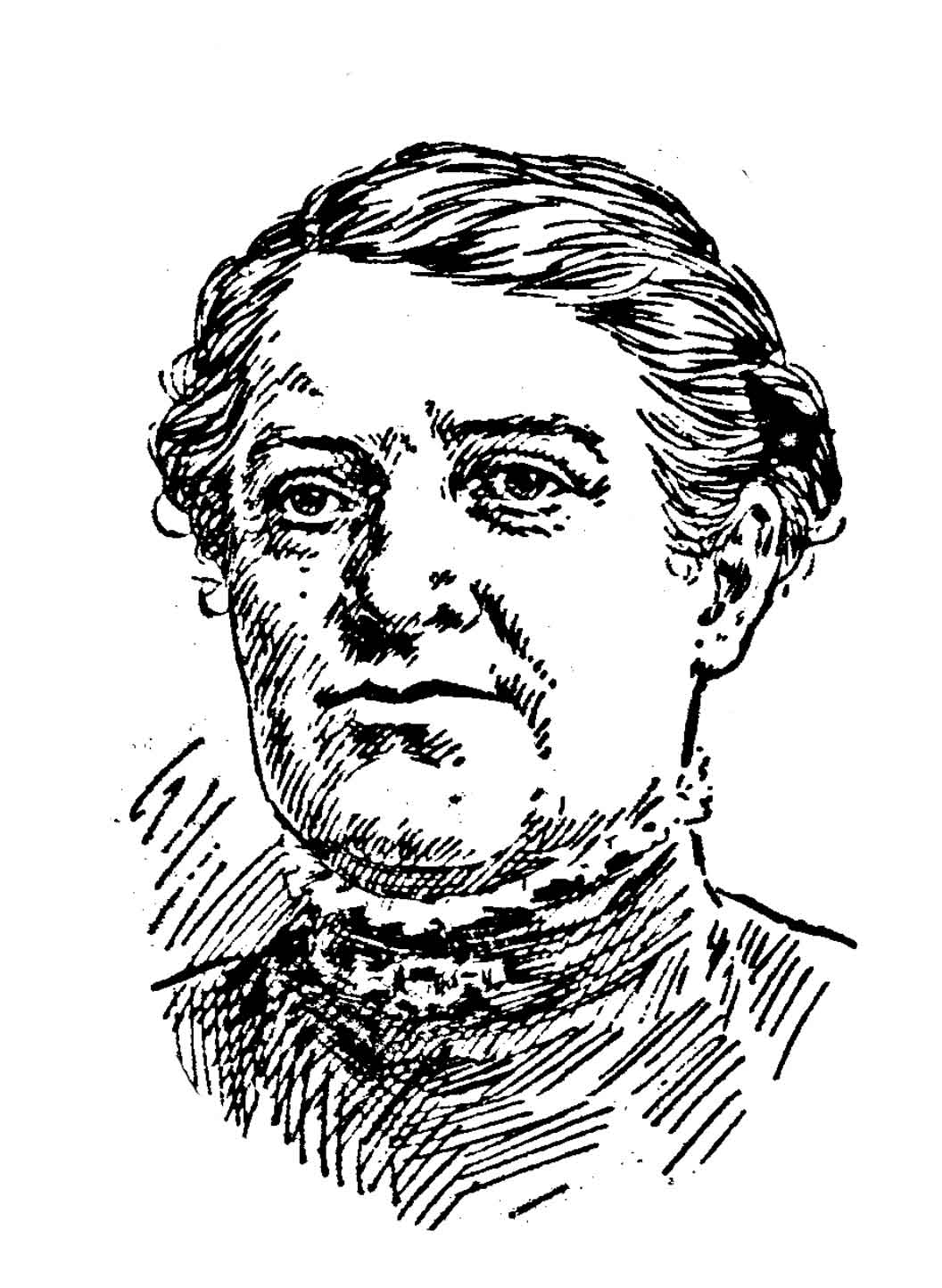 This article first appeared in the June EG Packet, the newsletter of the East Greenwich Historic Preservation Society. In the sketch above, Everlin Smith.

One of the most remarkable women, in the entire country, lived and worked right here in East Greenwich. In fact, she spent her childhood here at the Second Kent County Jail and died here, at the age of 80, on Sept. 1, 1925.

She was Everlin (Place) Smith, the jailkeeper of Kent County for nearly fifty years. Although it was extremely uncommon for a woman to be a jailer, it wasn’t unheard of: “During the yellow fever epidemic of 1793 the keeper, Mr. Weed, succumbed to the disease. His wife, Mary Weed, replaced him as the head keeper of the jail, and became probably the first woman jailer in America.”

Similarly, Everlin became the jailkeeper after the sickness and death of her husband, Jotham Smith. However, unlike Mrs. Weed, who resigned after three years. Everlin spent her entire career as the jailkeeper.

It seems as though this was the career path that Everlin was destined to follow. Her grandfather, uncle, father, and husband were the jailkeepers before her. After the death of her husband Jotham Smith in 1880, Everlin, who had been running things during his sickness, was officially appointed the job by the State of Rhode Island. 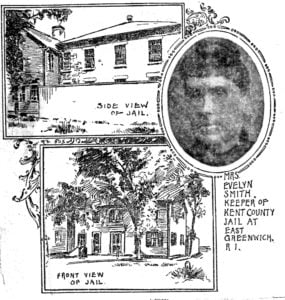 In 1880, her first year as the official matron of the jail, she had a cold blooded murderer to confine at the jail. In the village of Summit in Coventry, Isaiah Carr shot and killed his nephew Caleb Carr. He was brought to the Kent County Jail. At 7:30 am on Wednesday, July 28, Everlin found Isaiah’s lifeless body, while she was serving breakfast. He had strangled himself with his pocket handkerchief and a chair round. Everlin had to testify at the coroner’s inquest. This certainly was not a job for the faint-hearted.

The Boston Globe of Feb. 17, 1901, ran an article entitled: “Woman As a Jailer: Mrs. Evelyn [sic] Smith, Keeper of a Rhode Island Prison, Has No Fear of Lawbreakers, and Never Has Any Trouble Even With the Most Desperate Characters Entrusted to Her Watchful Care.”

The article noted that one of her “guests” was William McCaughey, “one of the notorious ‘wire gang.’” “Tug,” as he preferred to be called, had implicated the “gang” in the murder of young socialite May Fosburgh. It was a sensational crime, which had made headlines around the country. In fact, May’s mother, Mrs. Robert Fosburgh, came to the Kent County Jail to interview “Tug.”

The article went on to note that “Mrs. Smith is an amiable, a motherly, an honest and a resolute woman. If she lacked courage she would not be the successful jaileress she has been during the past 20-odd years. She treats her prisoners well and they return her kindness by behaving themselves, at least while they remain in the Kent county jail.” 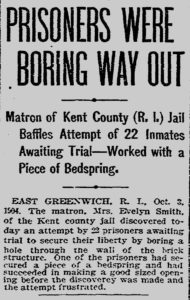 At that time, in 1901, only one jail break had ever occurred under her watchful eyes. It was in 1889, shortly after the new brick jail was built. The Rhode Island Pendulum of Friday, Dec, 27, 1889 reported: “Only three prisoners were in confinement at the time. They were George Morris, Fred Rockwood and Dan Donahue. All were awaiting the action of the Grand Jury, the last upon a charge of breaking and entering, and the other two upon a charge of larceny. The escape was effected through a breach in the east wall, made by the aid of an iron bar wrenched from a bed-stead. The hole is about 2 by 3 feet. The walls are made of brick and have scarcely had time for the cement to dry, so that the task was not a difficult one. The escaped prisoners were seen soon after they had gained their liberty, going toward the railroad track and undoubtedly went to Providence. The fact that the jail has been so recently built, and that these were the first prisoners in it since its completion, has given rise to much adverse comment as to its proper construction, plans, etc.”

In the 1901 Boston Globe article, Everlin was asked how she was able to maintain order with the male prisoners. She replied, “Well, I don’t exactly know, except it is that a man has more respect for a woman than he has for a man. There have been lots of tough and hardened men in the jail since I first came here, and they have behaved themselves very well. A little civility goes a great ways, and with a fair degree of treatment, the prisoners soon like to keep the jail orderly and they thereby secure all the more liberty and privileges. That means a great deal to them when they are confined behind the bars.”

It was also noted in the article, “the men have their three meals a day with cake or pie at each one of those meals. At every meal white bread and butter with the meat food are served, and the supper has both cake and pie to accompany the cold roast or the hot clam chowder.” Evidently Everlin’s culinary skills set her apart from her male counterparts in the profession.

Prisoners might arrive at any time, day or night, from all over Kent County, to be placed in her care. One can only imagine the amount of work that went along with her duties as the jailer, the cooking, cleaning, and paperwork. All this while she was raising her own children.

The Globe article contains interesting details about the folks imprisoned at the jail: “During the time Mrs. Smith has been the jailer in Kent county there have been a number of prisoners there who have been accused of murder. Among these were George Congdon, who shot one Wilcox at Oakland Beach. He was convicted and later sent to Cranston.

“The hardest prisoner Mrs. Smith ever had to contend with was Charles Burns, and he made trouble for every one about the jail. Burns was held for burglary and he was the most contrary man that was ever registered in the jail, but withal he was fairly obedient to Mrs. Smith herself. When she was absent for any length of time he would mind no one, and in consequence he would be locked in his cell for the time being. Burns was recorded as the bad man of the jail, the very worst in the 20 years of Mrs. Smith’s service to the state of Rhode Island.

“It is a singular thing, but Mrs. Smith is given no method of punishment for a contrary prisoner, except to confine him in a cell, but she says this is an effective way of curing men of their ugliness and they soon come around and decide to behave themselves.

“In all the years of keeping the jail, Mrs. Smith has never been assaulted nor attacked by a prisoner.”

It should be noted that not all those kept at the jail were hardened criminals. A large majority were arrested for petty crimes like public drunkenness. Debtors were also placed under her care.

As charming as the account of her life is in the Boston Globe story, as the Kent County Jail Keeper, Everlin certainly saw her fair share of unsavory things at the Jail. Imagine her shock on July 18, 1911, when she discovered Samuel Hambler dead in his cell. He had committed suicide by rubbing his neck back and forth on the sharp edge of his bed frame until he had slit his own throat. He had been taken up for being drunk the night before.

Her obituary in the Rhode Island Pendulum on Sept. 3, 1925, seems meager for such a formidable woman: “Mrs. Evelyn [sic] Smith, 80, died Sept. 1st at her home at the Jail where she was matron for many years.”

Rachel Peirce is the historian/archivist for the East Greenwich Historic Preservation Society. EGHPS meetings are open to all. Find out more about the organization here: eghps.org.