The ‘Indian’ From Pawhuska 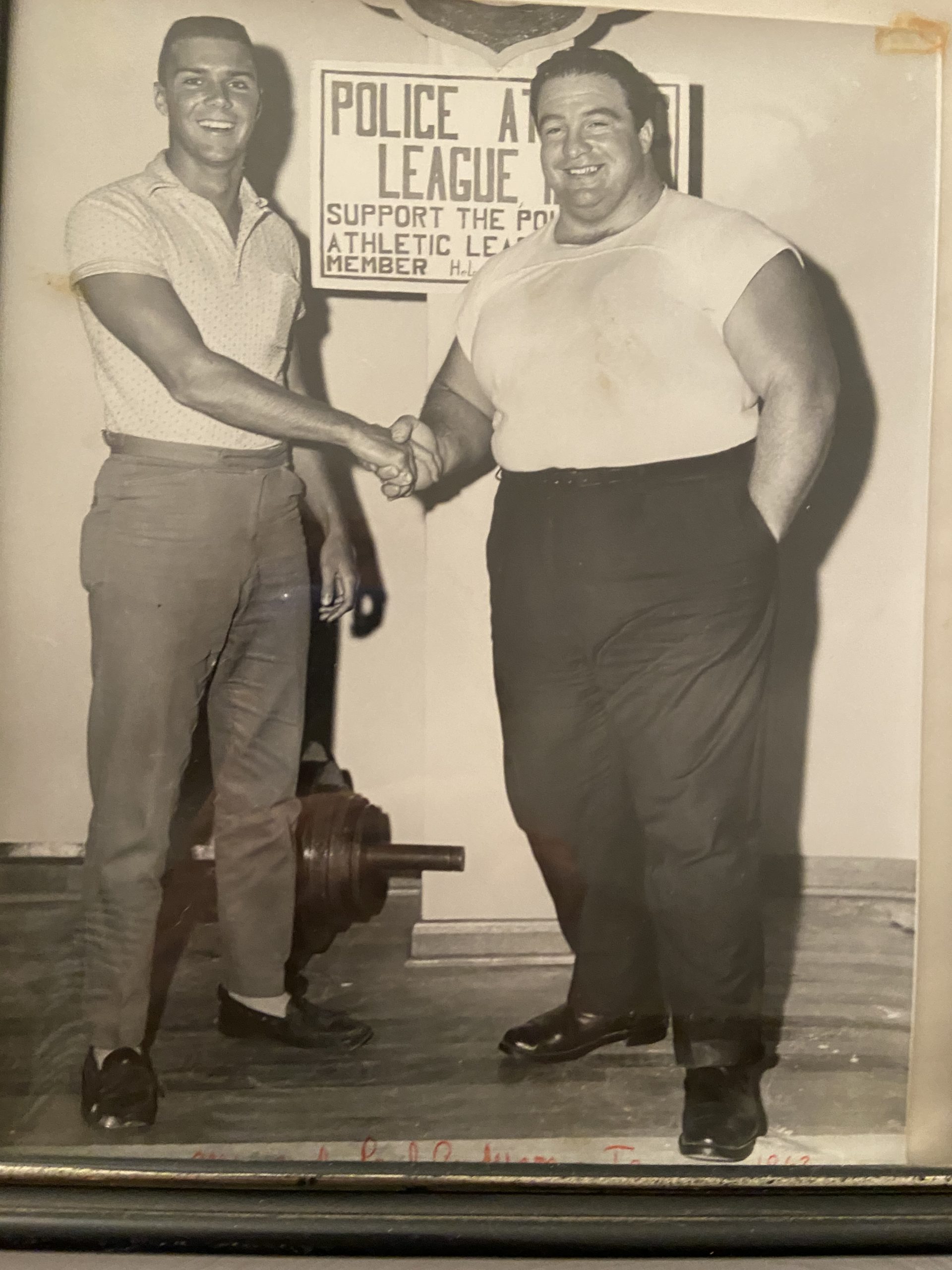 Above: Bruce Mastracchio with Paul Anderson, the ‘Strongest Man in the World’ at the time, at Harry Smith’s gym in Tampa, Fla. Anderson was first American to beat the Russians and he did so at the 1960 Olympics. He then decided to try pro wrestling and boxing.

When you travel around the country as I have, you are bound to run into many different and various people, from all walks of life.

Being as I am gregarious at times and not afraid to start a conversation, I most always put myself into interesting situations, with interesting people. Over the course of my life I have met, and talked to a U.S. president, top athletes, movie stars, politicians and the like.

Lately, I have been telling a story about something that happened to me during my sophomore year at the University of Tampa in Florida.

I was offered a football scholarship from the University of Tampa, out of high school. However, my mother did not want me to take it as she wanted me closer to home. She had already nixed my plan to go to California and sign on as a stuntman for movies and TV (what a mistake she made there – I “coulda” been a star!). She wanted me at the University of Rhode Island and that was that. It took a lot of sacrifice on her part even though URI was only around $2,000 plus in the day. I recognized her sacrifice and caved to her wishes. Big mistake!

So I went to URI. I did not figure heavily, at first, in the frosh football coach’s plans. Guess my 5-8, 140 lb. stick of a body was not what he envisioned when he heard he was getting EG’s outstanding player. He treated me poorly in the beginning, but I eventually proved him wrong and made him take notice.

Then in a game against New Hampshire, I separated, fractured and dislocated my shoulder. Rode 206 miles back to Rhody with the bone jutting into my jaw.

I underwent surgery and not one of the coaches, and only one of the players came to the hospital. None called. Feeling really neglected I decided to transfer out.

Though I should have stayed at Rhody as it would have been better for my football career, I decided to transfer to Tampa for my sophomore year. That turned out better for my maturity.

Instead of living in a dorm, I lived in a boarding house run by a little, old Jewish couple, Mr. and Mrs. Kitsis. The place housed construction workers, ladies of the evening, pro wrestlers and a few assorted characters. I got as much of an education there as I got in school. The talk around the two 12-seat dinner tables was enlightening.

Needing money, and being ineligible for football right away, I managed to land a job sweeping, mopping and cleaning a weight lifter’s gym just off campus. In fact it was just across the bridge going from the UT to downtown Tampa.

The proprietor was named Harry Smith. He was a former Junior Mr. America, and a professional wrestler. In fact, the gym was a gathering place for many of the pro ‘rasslers in the area. Harry took a shine to me and after doing my duties I got to lift weights and tussle with some of the pros. Most took it easy on me, but one time one of them got peeved at me, put me in a hold and tore up my rib cage. Had to go to the hospital.

Harry had no kids and he took me under his wing. I got to go to local matches in his car with the “babyfaces” (good guys, heroes). The “heels” would ride in another car. We went to many a small-town gym around Tampa for matches: Bradenton, Bartow, Zephyrhills, Sarasota and others.

The wrestlers would drive in tandem. Maybe stop for a meal on the way, all eating together. Then when they got to the town the cars would split and they would enter the gym from two different directions and doors. After the match where they bounced one another around with the appropriate grunts and groans, they would leave gym in different directions but, once again meet up on the road for another meal. It was a hoot.

One of the wrestlers I saw a lot was a “jobber” named Joe Scarpa. He was an Italian bricklayer and never impressed me that much as a wrestler. He was nice. Quiet. And a hard worker.

I spent a year at the University of Tampa, and when they announced they were dropping football I reached back out to URI. I was given a work-job scholarship by the new coach and headed back up north.

The wrestler I saw before me on the boxed screen in the squared circle was introduced as “Chief Jay Strongbow,” a Pawnee from Pawhuska, Oklahoma. Now it is not unusual for a Pawnee to be living in Pawhuska, which is Osage Indian country, and Osage County (Pawnee County being next door and southwest from Pawhuska), but it is not commonplace.

I was intrigued. So, I placed a call down to Harry in Tampa.

“Harry, I saw this wrestler on TV just now. He looks like Joe Scarpa but is called Chief Jay Strongbow. That’s not Joe, is it?”

“Yup, that’s him,” Harry said, “found out he was an Indian, heh, heh, and is really raking in the dough with it.”

So see, you can be anything you want to be in this life. Especially here in America. Don’t like being an Italian prelim wrestler? Get a headdress and some moccasins, do a little “war dance,” finish ’em off with the Tomahawk Chop and call yourself Chief Jay Strongbow!

Years later I retired out in Las Vegas. I joined a group called the “Cauliflower Alley Club.” It consisted of pro wrestlers and fans. It was mostly a once-a-year banquet honoring the wrestlers from the past. Even some of the current stars attended. It was funny in a way.

Many of the wrestlers, though only in their 50s, 60s or early 70’s were on canes, crutches, or in wheelchairs.

The masked wrestlers still wore their masks! I loved it!

I got to meet Verne Gagne, Nick Bockwinkel, Bobby “The Brain” Heenan and the Super Destroyer among others. Gagne would apply his “sleeper hold” on anyone who wanted to “feel it.”

He later killed a guy in his nursing home when he applied it too good and too long. He had lost it by then and basically didn’t know where he was. Victim of too many “piledrivers.”

I had another meeting when I was at UT with someone who became famous later in life. (Told at a later date.) At that time I was his mentor and basically kept him on “the path,” which would later lead to his stardom.

After he made it, I tried to contact him for a meeting up north. He never bothered to even answer my query.

Such is Life. It has its funny twists and turns. You have to get used to them.