The Funeral of Eddie Batterman, Part 1 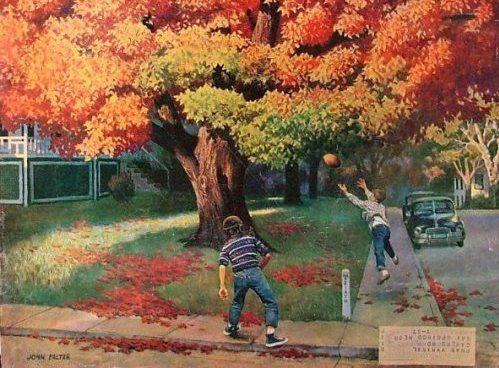 It’s snowing out! I am stuck inside going over old files and I came across this unfinished gem. It was going to be the start of a novel (based in some fact) on friendship and good old East Greenwich.

This is for those of you who keep asking me to put stories in a book or to write a novel. It is not going to happen from me, although I heard someone else is making an attempt to put my stories in one book for reader consumption. You have to understand – first, I am a sprinter not a long distance runner and, second, I have tried getting my stories published for years, got many rejections. But, when one of my stories was stolen, and ended up a made-for-TV movie it crushed me, and I put all thoughts of going that route on the shelf forever.

I got paid well for my writings over the years, my lobster, steak & Disney trip money, and am very happy sharing them now with you and hopefully, making you happy as you recall the joys of growing up in this town, the greatest little town, in the center of the greatest little state in the greatest country on God’s green Earth.

So now, I give you, the start of my only attempt to do a novel.

The train pulled out slowly from the station, and I sat back in my cushioned seat next to the window intending to take in the countryside between upstate New York and Greenwood Cove, my hometown in Rhode Island on the New England coast. It would be a five-hour trip, plenty of time to think, and bring back some of memories, and I wanted to do just that.

Bats had timed it perfectly. Just as he always had. He always had that flair for timing, whether it was a joke, a surprise, or a contest.

Our season had just ended at Onondaga High School. We had won the annual Thanksgiving clash with Oneida High, 14-12, and I was feeling flushed with victory, as any head football coach would be beating an arch-rival on Turkey Day, until I got back to my apartment and received the phone call.

Anything for an old friend, anything!

Trees, hills, houses and signs flashed by, and, eventually, melted into one as I lost myself in thought. My mind reached back through the years to stir up memories of the good times, and the bad times, we had shared.

Back then, in those halcyon days, we had lived the good life. One for all, and all for one was not a storybook phrase for us. We had lived it and loved it! Bats, The Brooker, Deacon, Picks, Roval & Ace, all for one and one for all. It was storybook back then, a blending of the times, and the people before the country was introduced to hippies, love-ins, the Beatles and, later, yuppies.

It was a time of innocence and naiveté.

That was us, innocent and naïve, but in a special way. A very special way. We were products of the ‘50s and observers of the ‘60s, and now the turbulence of that latter decade would be with us always and we would never forget it.

I laid back my head and closed my eyes….

“Tossing the Football,” by John Falter.

I had turned to go and did not see the football helmet coming down to make contact with my head. The next thing I remember was rolling and moaning in a pile of autumn leaves. Butch and Rich helped me clear my head and I went home, though I was late for supper and my father was mad.

That was my first meeting with this new kid in our group. His name was Eddie Batterman. At first we called him Batman as a nickname, as kids are want to do. Then that was changed to Bats and then Batty. You’ll see why later.

End of Part 1. Check back next week for Part 2.

Bruce Mastracchio grew up in East Greenwich, where he experienced those 28-hour days and 8-day weeks that contained the magic that made his hometown so special.