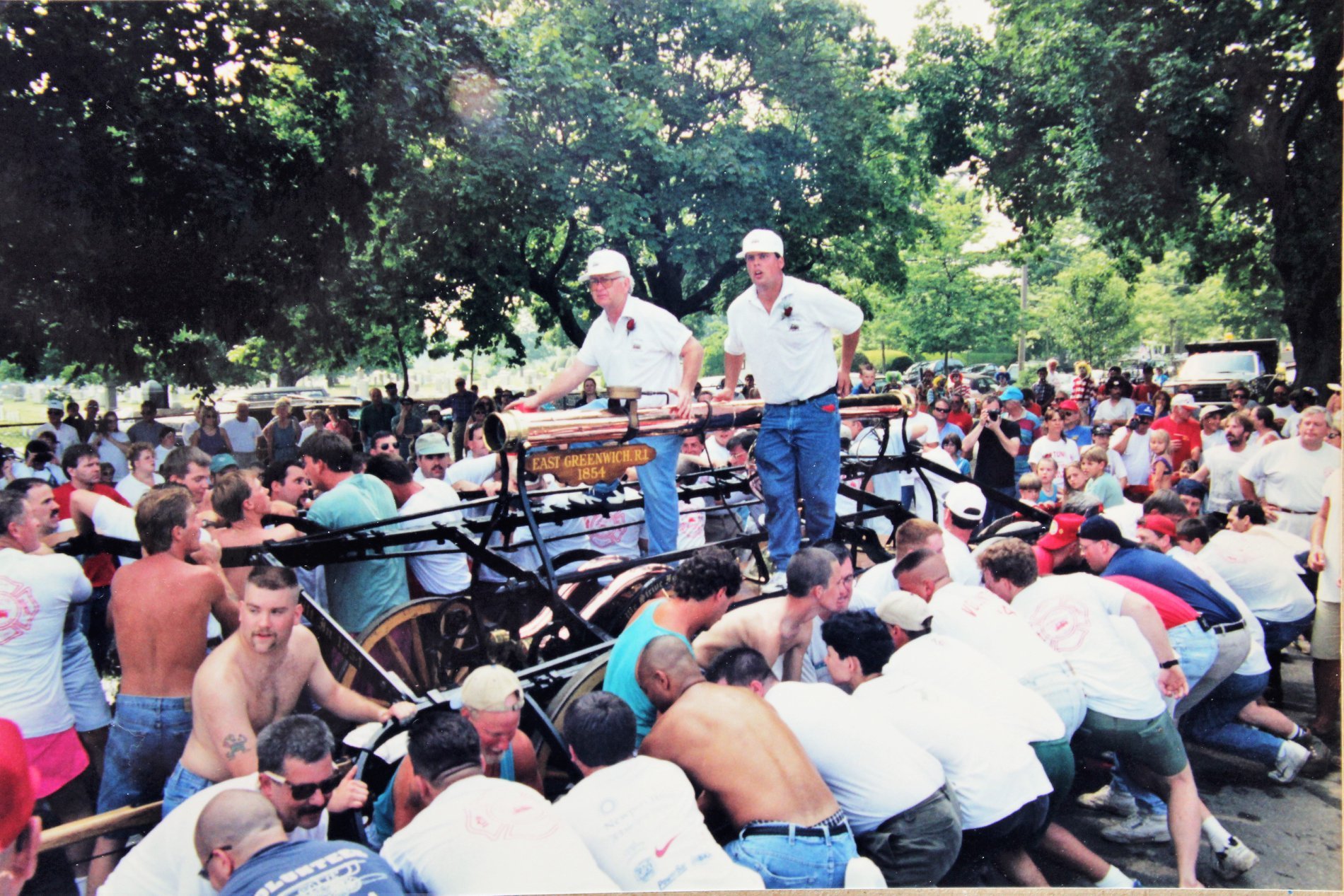 There hasn’t been a muster around here in a long time. New people to the town most likely don’t even know what one is. Back in the day they were a regular occurrence in small towns around Rhode Island and New England, and East Greenwich had one of the best hand engines and crews around, and often grabbed bragging rights by winning a muster, whether it was held right here in East Greenwich, or, up in Goffstown, N.H.; Marblehead, Mass.; or old Newburyport, Mass.

This article on musters appeared in the November 1992 edition of the old East Greenwich Magazine. It was written by Karen Isibel (now deceased). It is a very informative article on musters. Maybe after reading it, some of the powers that be will bring them back. – Bruce Mastracchio

In October of 1992, the EG Veteran Fireman’s Association secured bragging rights for themselves by winning a muster down in Westerly. They pumped out a winning stream of 198 feet. Sound like child’s play. It is Not!

A hand engine draws water from a source such as a pond, stream, or even – years ago – from a watering trough. The water enters the engine and is drawn into the dome by two ten-inch pistons. Continuous hand pumping forces water into a capped hose two and one half inches in diameter, creating tremendous pressure.

During a competition, the capped nozzle is 150 feet away from the engine, and the paper for measuring the stream begins 100 feet from the nozzle. Each team is allowed 15 minutes and may pump their engine as many times as desired during that time period. The water is pumped “up to pressure,” and, at the foreman’s signal, the nozzle cap is released.

Fast and furious pumping ensues (East Greenwich crews normally consisting of rugged quahoggers, high school football players and the like) a cooperative effort of the 40 to 60 men pumping wildly at the side bars of the engine. The nozzle crew of four men carefully directs the resulting jets of water to the measuring paper (gauging prevalent winds).

The Westerly competition was won with a stream of 198 feet though the Volunteer was known to put out streams in the 215 foot range. Members of the winning crew in Westerly were Bill Burley, Donald Duffy, Pete Hendrickson and Roy Matteson. Anyone is welcome to join the pumping and many local people have done so.

The Volunteer was built by Button & Blake  in 1854 in Peabody, Mass. It saw active service in several towns in Massachusetts and New Hampshire, and also, Central Falls. The engine was purchased from that city in 1913 by the newly formed East Greenwich Veteran Firemen’s Association. It was rebuilt in the 1970s by Weindel Brothers.

A muster from 1947. Photo from Sharon Bradshaw Hanson.

The copper pressure dome is a replacement for the chrome-plated dome, which was damaged in 1967 when it blew away from the engine, splitting the copper tube above it which in turn  split the ear of assistant foreman Lawson Salisbury and knocked foreman Edward Brennan to the ground. The metal dome soared 300 feet in the air before landing in a field, safely away from spectators.

The EGVFA was organized in 1913. The president and engine foreman was Edward Brennan, whose son, also Edward, served as foreman years later. Grandson Chris has also served as foreman, while another was Lawson Salisbury, who also served as EGVFA President. These and other active longtime members have participated faithfully in many musters.

In East Greenwich, musters were held in conjunction with the Firemen’s Carnival (another tradition gone by the books along with the Firemen’s Ball). The proceeds from that event covered the maintenance  expenses of the engine and provided funds for scholarships, as well as sponsorship of local sports teams and a Boy Scout Troop. The increased cost of operating a carnival and the lack of a field large enough for a muster eventually rendered the carnival/muster combination, impractical. The last local event being held in 1978.

The EGVFA building (The Firemen’s Hall) was opened in 1978 and money raised at what is affectionately called “The Home” is used to support the engine and those causes formerly funded by the carnival.

Tradition dictates that a victorious crew parade their hand engine down Main Street after a win, and, through the cooperation of the EG Police Department , that was possible following that latest victory. The EGVFA thanked the EGPD for their help with the long awaited celebration.

There were several musters planned for 1993 including one hosted by the EGVFA. If anyone is interested in seeing the hand engine “Volunteer” or the Museum of Firefighting, they may be viewed at The Hall down on Queen Street. You can catch a video of some men – and one girl! – pumping HERE.