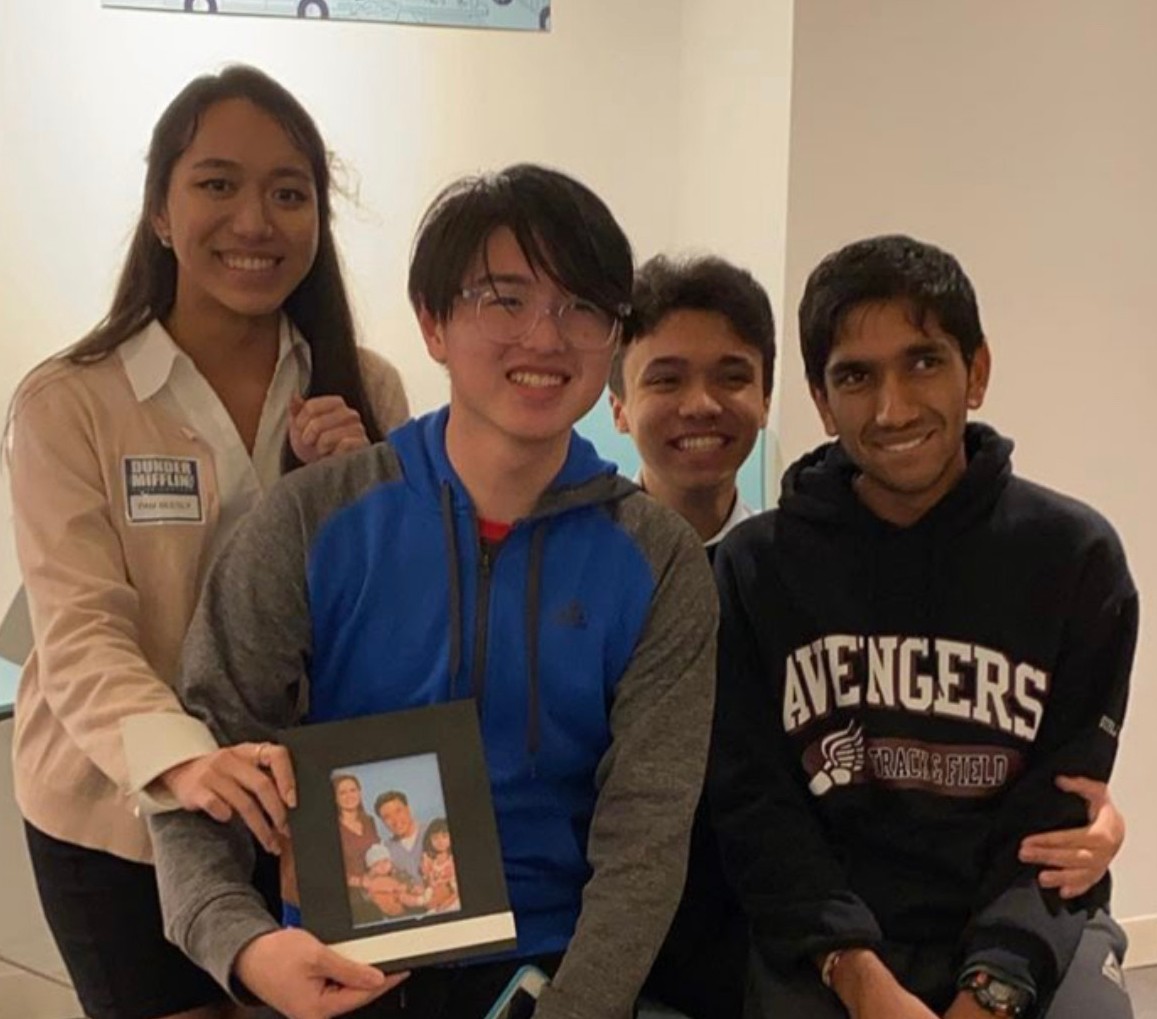 Above: Matt Tactacan (second from the right) with friends Maleela Hong, Alan Zhang, and Sunny Sait.

Matt Tactacan entered high school like any other ambitious 14 year old: a Harvard enthusiast with a rigorous course load. While he still possessed some of the typical “High School Musical” misconceptions about what happened in high school, freshman Matt was eager to begin learning and working hard in order to achieve his goals. He had spent his entire life in East Greenwich, viewing EGHS as the final stepping stone before an Ivy League undergrad program and later, medical school. He came from a family of talented doctors and had planned on following in their footsteps ever since he was a child. “I remember drawing pictures of hospitals with red crosses when I was really young,” he says when asked about his mindset as a freshman. “[Being a doctor] just felt natural for me. I knew it was the path I was going to go on.”

As adamant as Matt thought he was about going into a medical profession, his passions began to change. He found he didn’t enjoy the rigidity of his high-level math and science classes.

“Chemistry was really difficult for me,” he said. “It was so formulaic for me. There was no room for creativity.”

Then, during his junior year, Matt started taking several business and finance courses taught by Mrs. Page. “I never thought that these classes could change the trajectory of my life,” Matt said. He had only taken the courses because he thought they would be a fun way to fill his schedule. They did so much more than just pass the time. “Mrs. Page was really the reason I started asking myself the question, ‘Do I really want to be a doctor?'”

For Matt, Mrs. Page’s business courses provided him with a creative outlet where he began to develop his love for entrepreneurship. He discovered an outgoing and adventurous side of himself that he felt would be lost as a doctor.

It was a huge change for him, one with difficulties and moments of self doubt. “Going against what I thought I was going to be my entire life, it was hard. It was really scary sometimes. Being Asian, I felt like I was pushed towards certain pathways that were deemed ‘smart’ careers. And none of my family is really in business besides my mom, and for her, a lot of the things she does are relatively small scale, so there was no one really close to me that I could look up to. It was a total 180 for me. It destabilized everything.”

Despite his inner turmoil, Matt continued to follow his passions. “That’s really the best advice I would have for anyone going through something similar. Do what you love, and don’t listen to the people who would tell you otherwise.”

“We’re all here just existing. It doesn’t matter if the immediate things go good or bad. The world will keep turning. We just have to make the most for ourselves out of what we have.”

While Matt’s passions in life may have shifted, his genuine nature and kind demeanor have remained constants. Whether it’s in the hallway between class periods or at a school event, Matt can always be found smiling and laughing with friends. For Matt, friends are extremely important. With his rigorous course load and the constant stress of high school, being able to rely on supportive friends was a game changer. When asked about the impact his friends had on who he has become, he said, “Having friends in high school was probably the best thing. You know, having people to goof around with and talk with, it makes everything 10 times better.” Eager to experience as much as he could, Matt participated in numerous clubs such as Drama, Future Business Leaders of America (FBLA), and Model United Nations. Some of Matt’s favorite memories of high school come from these extracurriculars and the opportunities that arose from them. The opportunities pushed him out of his comfort zone in a good way.

“Having similarly minded people, people who believe in the same stuff as you, people who are better than you are, they’re what make you a better person.”

When it came time to apply to college, the shifts in Matt’s thinking started to play a role there too. He’d heard the Ivy League narrative his entire life, but now he realized that there were so many more things to consider than a college’s name. The mere volume of tests and essays required by some of the country’s top institutions were incredibly stressful for Matt, to the point where he questioned whether or not he would be accepted to college anywhere.

In an unexpected series of events, Matt had the opportunity to participate in Young Entrepreneurs of Providence (YEP), a program designed for high schoolers to learn about and test their entrepreneurial pursuits. In one of these workshops, the speaker Alden Richards, founder and alumni of several space and engineering-related start-ups, asked the group what they thought he had majored in at college. Matt said, “Everyone was guessing things like engineering, and physics, or you know business. And then he said ‘No, I studied Medieval English Literature and East Asian history.’ It was incredible. Everyone was shocked.” Mr. Richards went on to say that what you chose to study in college or which school you go to doesn’t dictate the trajectory of your life. For Matt, hearing this was what gave him the confidence to take a path less chosen.

Matt poses with his aunt and her co-workers while on a visit to the Philippines.

Matt decided to apply to schools on the other side of the globe. His country of choice? Australia. The process was terrifying because of the different nature of the application, he acknowledged, but unsurprisingly Matt was accepted. He will be attending the University of New South Wales in Kensington, Australia, this coming February.

“I’m so excited,” Matt gushed. “It’s so different from American universities, and that really pushed me to seek it out. It really fits me which is incredible.” For Matt, being able to study abroad full time fulfills his search for adventure. While he’s been to Australia a few times before, Matt’s never stayed for longer than a couple weeks. Fortunately for him, he has extended family who live near his school who will be able to help ease his transition. Matt hopes that his unique path will help him later in his career and inspire him to continue to think outside the box. Reflecting on his pre-acceptance worries, Matt commented, “It’s funny looking back to when I was so stressed about my essays and subject tests, because now, the school that I’m going to only required an SAT score and my transcript.” While the pressure he felt during his junior and senior years was immense, Matt wouldn’t change any of it. He feels like the experience of it all helped give him perspective, and that is something he would never regret.

“Life is something that only moves forward. To me, it doesn’t really make sense to be looking back at all of the stuff we could’ve had.”

Even though his senior year was cut short due to the pandemic, Matt remains optimistic. While it may sound strange, he said COVID-19 actually brought him closer to his classmates. “In school, when things were normal, it almost felt like we were all racing towards something, like we were always competing against one another. But now, life isn’t a race anymore. We’re all in the same place, and I think that’s what brought a lot of people in my class closer together.” While he’s sad that he won’t be able to experience his senior prom or walk for graduation, he doesn’t see these things as defining moments in his life. “We can always dance, you know, we can always dress up and hang out with friends. Just because we don’t walk doesn’t mean we didn’t just finish 12 years of education.” Matt has even started taking pride in the label given to his class. “I think it’s kinda cool that I get to be a part of the ‘class that didn’t graduate.’ That’s something we can talk about forever. We’ll always have that as a part of our stories.”

Good luck in college, Matt Tactacan! We will miss you!