The Buzz on Business: Congratulations to Chuck Hinman Do you have an update you’d like to see included here regarding an 02818 business? Whether it’s small or big news, we’d like to hear from you! Share the buzz: [email protected].

With retirement on the horizon and more than a decade with The Public’s Radio, Chuck Hinman’s last day on the air will be October 15. Sally Eisele, Chief Content Officer and Managing Editor, shared the following: “It’s hard to know where to start with Chuck. He makes it all sound so easy. But behind the scenes, he has been a one-man morning show for many of those years. All through the pandemic, Chuck has been coming in alone every morning, writing copy, organizing sound files and running his own board. You don’t hear any of that. What you hear, every weekday morning, is the kind of person you’d like to be saying good morning to over coffee. I think I can probably speak for all of us in saying that his smart, inviting presence has made us feel as though we know him. And we know more about the world around us by the stories he’s told on the air and through the regular segment he co-hosts, Artscape. He is a friend, and he will always be a friend to The Public’s Radio, even as we celebrate his service to us and say farewell. Thank you Chuck!”

A friendly local radio voice in Rhode Island since the 1980s, Chuck has been a part and at the center of some memorable events. One of which is shown below, in his country years according to his wife, Joannie, as he introduced the legendary Kitty Wells. Chuck met Joannie at WSNE while News Director on the long running “Jones and Joan” morning show. Chuck was co-winner of the 2017 Metcalf Advocacy Award for “St. George’s Loophole.” The Metcalf Awards were founded to honor Michael Metcalf, publisher for The Providence Journal, to memorialize his contributions to the community and recognition of the media’s power to offer insights that can promote understanding. Chuck’s plans for retirement include sleeping in, doting on his beloved grandchildren, Jackson and Ava, and playing guitar (as he enjoys doing here, with his brother, Ken). 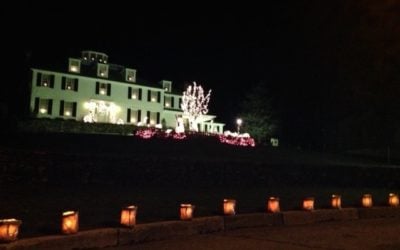