Who knows what brews in the minds of teenagers? Given the time and the resources, but mostly the time, teenagers can come up with some pretty creative and innovative stunts. In the story that follows, that is exactly what happens when Chink, Watmo, Dorty, Slink and Cupcake put their heads together to come up with a prank that would go down in legend, lore and town

talk for ages. (Or so they thought.)

They spent weeks laying out their plan and each had duties to perform in order to pull this one off. It had to work like clockwork and they could not get caught. If they were caught it would mean expulsion. All four were athletes and in a small school losing just one or two could wreck a season. The boys, being boys, did not give much thought to that part of it.

On the appointed night, the boys set off for the Jackson farm. They were going there to get Matilda. She was one of the many cows that the Jacksons had on their farm located just outside the confines of little old East Greenwich. Swamp Rat Jackson was a friend of the boys but he had “joined up” after dropping out of school, so he would not be in on this prank. 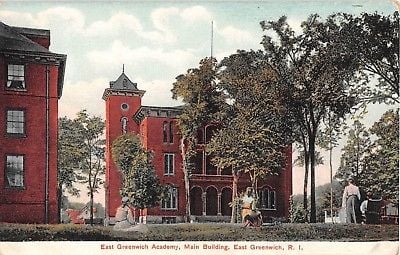 The boys snuck over the fence in the back pasture and under the cover of darkness they slithered up to the barn, opened the door and worked Matilda out of her night stall. They put a rope around her neck, gave her some treats and started walking her towards The Academy, the town’s high school.

On the way they fed Matilda “treats.” The thing was these treats had a little extra ingredient, which they hoped would start working once they had completed their mission.

Soon they were at the front door to the Main Building of the six-building campus. They banged on the door and Watmo appeared. He had been hiding in the building since the end of school, as all the doors were locked. He hid in a classroom closet and whiled his time waiting for his partners in crime to appear.

The boys then walked Matilda up the stairs to the third floor. There they tied her to a pole, fed her some more “treats” and made their exit.

The next morning there was chaos at the school. Mr. Silver, the principal, was beside himself! He sped around yelling and giving orders!

The school stunk to high heaven! What could be done? It is easy to get a cow to walk up stairs (as the boys knew), but not so easy to get it to go downstairs.

School had to be cancelled for the rest of the week as the school custodians and staff worked to clean up the mess. There were cow flops all over the third floor.  The “treats,” laced with a laxative, had done their work! Matilda had done her work! The boys had had their prank.

They were never caught and the tale of The Academy Cow became town legend and lore.

Chink, Watmo, Dorty, Slink and Cupcake went on to play their sports, graduate and go in the service to fight in WWII. They all came home and when they got together for a few drinks they always managed to have a few yuks over The Academy Cow.

They are all gone now but I can hear them laughing in Heaven whenever they get together for a “few.”

Writer’s Notes: This incident actually happened and was related to me by a daughter of one of the participants. Strangely, it had been forgotten for some years. I was NOT even born when the incident occurred so used my imagination to draw up the scenes and put this together. The truth of the story is that some EGA boys got together, “borrowed” a cow from a nearby farm and got it up to the third floor of the Main (called the Administration Building) Building and left it there to do its duty, with some help from the boys. So there you have it. Enjoy!

Want to tell you about something else. I seldom go into Jigger’s Diner any more (too pricey) but they have one menu item that will pull me in their on occasion. That is the Lobster Benedict, called at one time The Queen Street Benedict or Hollandaise. It is EXCELLENT! Went there yesterday to indulge. The meal consists of English muffin, hollandaise sauce, two eggs, lobster and avocado.

They even throw in a fruit cup or home fries. Try it sometime. Cost is $16 plus with tax about $18.36. Save up. It’s worth it. For a guy who buys breakfast for $1.99 most mornings it is a Big Splurge, but I have found out, in this life, it is OK to treat yourself once in awhile.

Lastly, I am slowly coming into the New Age and all of a sudden people are feeding me pictures, which I am going to scan and share with you. The scans were costing me about a buck apiece before BUT now I have a printer with scan mode and some people have volunteered to help me with it. At first things might be sketchy BUT once I can start matching pictures with stories, it should really enhance the experience and the share.

Remember, Be real careful out there and be humble and kind. Sometimes, a hello, a smile, a  “How’s it going?” can make a person’s day.

Bruce Mastracchio writes about the glory days of East Greenwich and his adventures. You can reach him at [email protected]