That Low Down, No Good, Infernal Bucking Machine 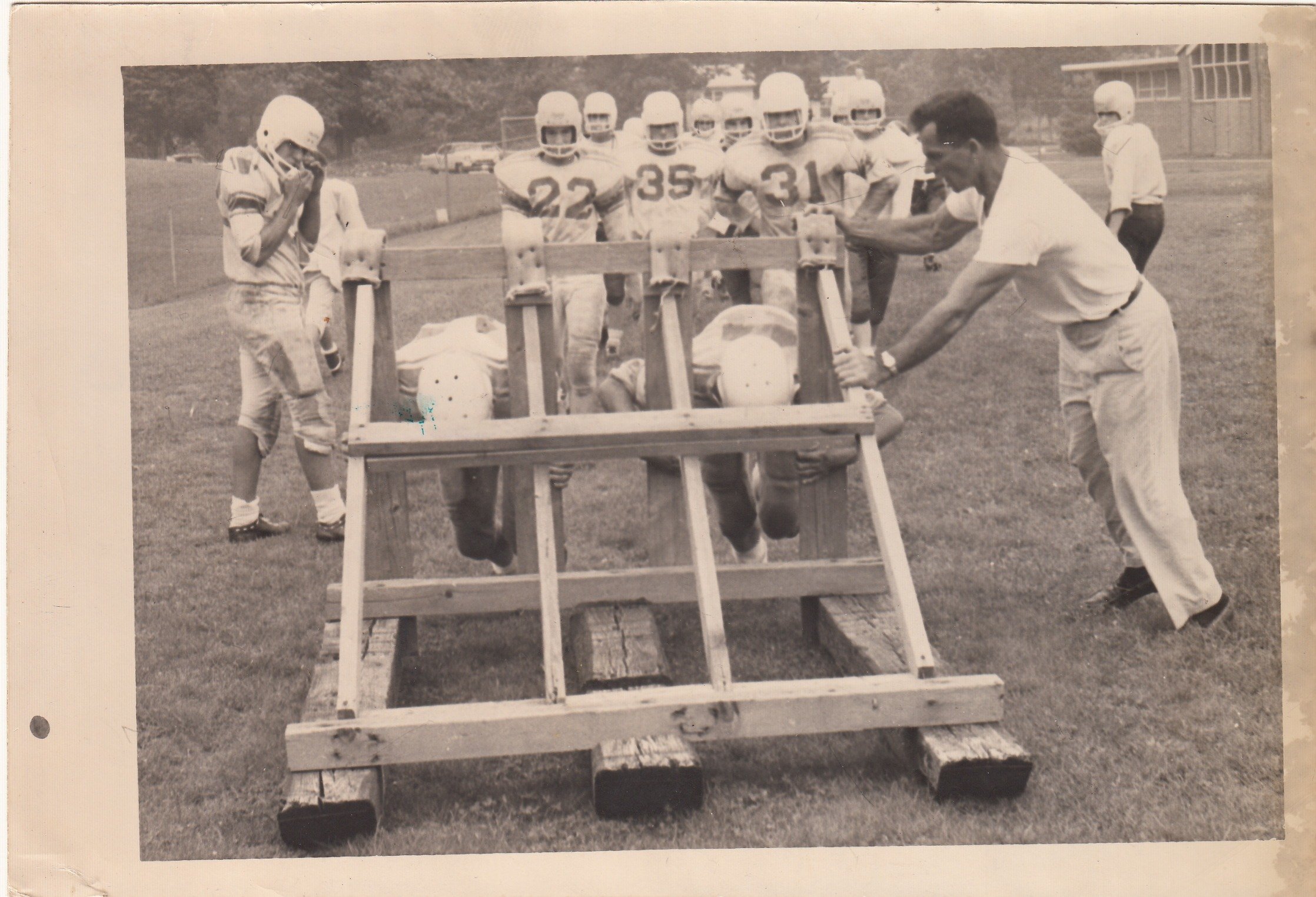 Here in Greenwood Cove, athletics took up a good part of our every day. It seemed we always had a ball in our hands. Basically, we did everything by the season. Summer was for baseball. Basketball was in the winter, though we did play hoops all year round. But, fall was for Football!

Most of us could not wait to get to high school so we could don the Crimson (not Maroon! Not Cardinal!) and White of the Greenwood Cove Quahauggers, “Hauggers,” for short. Their uniforms were cool (kind of like Alabama’s), and their helmets had the traditional three stripes, which held a secret meaning.

Plus, they were led by the legendary, C.A. “Bull” Cherry, who had grown up in Greenwood Cove (though he played for a Catholic HS), went on to play college, and had a short stint in the pros, before returning to coach football, basketball and baseball at Greenwood Cove High.

Coach Cherry was tough, but fair, and he had a lot of good points. However, the budget for sports at GCHS was meager. We were the smallest high school, in the smallest state, in the greatest country in the world on the third rock from the sun. But, being a tax-supported school, in a small rural town, you did not always get the equipment you needed, unlike today where the kids have two-man sleds, five-man sleds, seven-man sleds, tackling sleds and the like.

He built a neat tackling machine with the dummy hanging from a goal post type contraption, a quick-step rope maze, and a few other good devices.

BUT, Coach Cherry also built the machine that was going to become my nemesis through five years of high school football. (GCHS was an 8-12 high school.)

YEP. It was Coach Cherry, who built that no good, low down, miserable, rotten, infernal bucking machine!

Most schools in the state had the newest in blocking and tackling sleds. They were metal, spring-loaded, and slid nicely on grass or dirt, when blocked or tackled. Coach C.A. Cherry did not have the money for those machines. He did not have access to nice metal, spring loaded or not.

What he did have were railroad ties, big 4×4 and 4×8 pieces of monster wood; 2×4’s and used fire hose, which he proceeded to weave and cut and nail together to produce the most devious torture machine known to man since the Spanish Inquisition. A wooden Marquis de Sade!

Now “Quackers” probably was not bothered by it. But, Quakers was an All-State caliber running back who went on to play college ball in the old Pac-8, the only kid from our state to do so on a full scholarship.

And, Fun-A-Head, our murderous fullback; Hatchaway, our tight end, who could kill you with a look; and Renzo, “The Magic Wand,” our halfback probably never had any problems with it either. But, they were high school jocks with muscles upon their muscles, five o’clock shadows and little thought process in their skull casings. They all joined the Marines, which should give you some idea of their mentality. They just killed whatever got in their way in high school, and wanted to continue it on into the future.

In fact, for fun after practice, Fun-A-Head and The Wand, used to take turns ramming their heads into the lockers to see who could make the biggest dent! AND, they did this with no helmets on!

I, however, was a brainy, cerebral, think for myself type of player, who started out as a 98-pound, year-long blocking dummy for those Neanderthals, in the 8th grade, and by my senior year had progressed to 140 sparkling pounds (at increments of 105, 115, 128). That translates as S-K-I-N-N-Y! No muscle. Just mouth and speed and fast with both.

I HATED that Infernal Bucking Machine! From the first time I laid eyes on it. It became my enemy from the get go, and, just like my famous battles with that mean, old assistant coach, Enzio “Ironman” Zaccanazzi, I planned its demise from my first meeting.

There have been only one, maybe two other things in my life, that almost broke me down physically, and psychologically as did that Infernal Bucking Machine. One was bull-raking (one of the reasons I went to college – did not want to be doing that all my life); the other were the corner forms I had to carry when I worked for Bob Storm, the GC “Concrete Castle King.” I devised every trick I could to make handling those corner forms easier. I wore foam rubber pads. I doubled my shirts. I dragged them. I flipped them. I wanted to kill them!

I felt the same way about That Infernal Bucking Machine. Only worse.

I PLANNED TO DESTROY IT !

However, that was in my mind. In real life, NOTHING HAPPENED! Nothing for five full years! Five years of humiliation and defeat. Though I went on to be All league as a Junior and a Senior, I gave NO credit to that IBM !

Finally, in the spring of my senior year I got the chance. Blue Dog and I plotted it out. I, Brian McCormack, would finally triumph over this monster of wood, nails, bolts and hemp!

Blue Dog and I assembled the necessary tools. We laid out our plan of attack. We were ready to strike. And, strike we did!

The night was black, and the moon was yellow, and The Machine was going down! Tatatatat!

Blue Dog and I got to the field around 9 p.m. It was almost pitch black, but, the moon and a flashlight provided all we would need to do our deed. We had a hammer. We had a crowbar. We had pliers. We had wrenches. WE were PREPARED! We would NOT FAIL!

We worked for over an hour. Maybe two. Part by inglorious part, The Infernal Bucking Machine fell to our machinations. First the cross pieces. Then the uprights. Then the slides. We were done! We even knew what would come next.

We stacked the IBM into two piles, and, much like we carried the 18 footers on our job for the Concrete King, we hoisted the piles to  our shoulders and carried the IBM to The Pond, which was across the street from Greenwood Cove High School.

Across the street, through the woods, down the embankment, and The Infernal Bucking Machine was deposited in The Pond! Never to be seen, or heard from again! EVER! The Machine was D-E-A-D! The Wicked Machine was dead!

I had triumphed! We had triumphed! No other poor eighth-grade footballer would ever be wracked by that Infernal Machine! No Freshmen! No Sophomores! Nobody!We had won the day! We had brought an end to the life of that no-good, rotten infernal, mucking, trucking, bucking machine!

OR so we thought:

Small towns are small towns. There is so much good growing up in one. There are many good points.

Coach Cherry, of course, knew something was amiss the next time he stepped onto his beloved field and saw that his beloved Bucking Machine was gone. It was not too long after that before someone tipped him off as to the whereabouts of his Beloved BM. He went to The Pond and dragged The IBM out. He dragged it back to the field. Probably carried the whole thing at once being the muscled behemoth that he was.

AND, Coach C.A. Cherry reassembled the Bucking Machine so that it could torture future generations of GCHS footballers. Our victory had been short-lived!

A few years later. And this is where someone I knew gets confused, another group of plotters got together, and not only disassembled that hated machine, but, to make sure Coach Cherry could not put it together again. They BURNED IT! I was NOT involved. Was NOT there. BUT, I heard about it.

Maybe my old friend was there with his gang. I think he may have been. But I was not.

The kids today get to practice their blocking and tackling on the best equipment that money can buy!

THEY don’t have to hit that no good, dirty rotten, infernal bucking machine!

They don’t know how good they have it!

They don’t know what they are missing!

Writer’s Note: In case there are any reading this who minds are elsewhere than above their belts. It was actually called The Bucking Machine, because Coach Cherry thought that when his players hit it and lifted and moved their legs just so it looked like the bucking action of a wild horse. Simple huh?