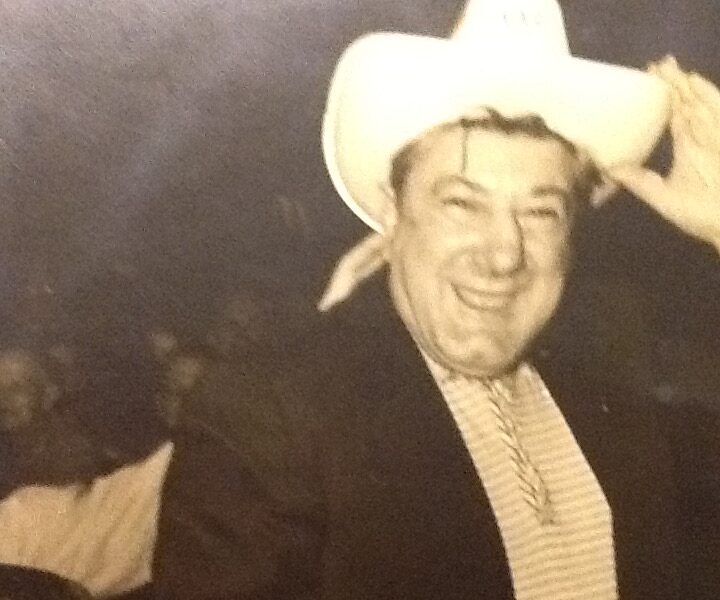 Editor’s Note: Bruce wrote this in 1984. We share it here now as a further remembrance of the life in the building that stood at 104 Duke Street until earlier this month. As Bruce wrote then, Tar Tar Ucci’s passing marked the end of an era for East Greenwich, particularly for the people “Below The Hill” who knew and loved him. Those from Scalloptown to Chicken Hollow.

Most eulogies are euphemistic. They try to present the deceased in a softened light. This one will not be.

Tar Tar Ucci was a good man, who lived a good life, for which there is no apology. As an old friend once said of him, “He was a Man’s Man, a Guy’s Guy!”

He enjoyed what he did and he never hurt anyone. In fact, he helped out more than a few.

For those of you who knew him, I want you to picture him at his grocery store on the corner of Queen and Duke Streets in the ‘50s, robust and full of life, a different picture from the man, who suffered with emphysema the last few years of his life, and could not take five steps without having to pause for a rest.

Instead, picture him with his T-shirt, slacking pants worn over a pair of penny-loafers and black socks. See him with his butcher’s apron. The big forearms, like his heavily muscled legs giving a hint to the powerful athlete he once was.

Now see him calling to someone – “Chief,” “Mac,” “Bud” – as names were never his strong suit. He would be connecting to bum a cigarette. Or five. The little white sticks that eventually tackled him as few players could, and killed him.

Then watch him go over to the side door to watch the kids play tackle football in the streets of the area they playfully named after him.

“I’d like to have the money that people owed him,” was the quote heard most often when people talked about Tar. Though he was not a success by society’s standards, Tar was a huge success, and a legend, to the many people who knew him.

He did things bigger than life. He was a Giver in a world where too many people are Takers. He gave on the athletic field and he gave all through his life.

We need 38 new donors to unlock $1,000 from the Knight Foundation. Donations in ANY amount work. Click here: https://eastgreenwichnews.com/newsmatch-2021/. Or on Venmo: @egnews

A lot of people owe their start in life to his easy-going generosity. He would cross out a $500 grocery debt like it was 50 cents, and think nothing of it. He would lend a person $50 and not worry if it ever came back. Most times it never did. Most times the people whose debts he erased made out OK, and the hurting thing is they never repaid him, nor shopped in his store again. He was hurt more by the latter.

Tar never married, but he was father and idol to hundreds of kids, in particular “His Boys,” generations of kids who hung out on the corner of Queen and Duke. Their playground was the corner. Their schoolroom, the store. They learned practical math and practical life playing penny pitch, twenty-one, craps and playing hearts in the storeroom on rainy days. None was ever hurt by it and many of these kids are successes today.

They worked odd jobs that he had for them at the store and they ate the penny candy without paying, and they played the rough and tumble tackle football games on the side street, lovingly called Tar Tar Uke’s Memorial Stadium, under his watchful eye. All the kids trying to impress the Legend they knew him to be.

And then there was The Legend. The Boy-Man, the local Jim Thorpe, to whom all future EG athletes would be compared. How many times had I heard – “You’re good, but you’ll never be as good as Tar.”

He was EG’S ONLY TRUE Athletic Legend! He stood out no matter what he attempted, be it football, basketball, baseball. Swimming, boxing or wrestling. He was pro in two of them and if you ever got cornered by someone who saw him play, you would be regaled with Tar Ucci stories by the hour.

Yes, Tar. You were all they said you were AND more. Mere mortals could not stop you as you exploded with coiled-spring legs, and lowered head, a finely tuned Minotaur, spurred on by the crowd’s roar.

But now that’s over. They will revere your statue and admire the mold of what was you. Your bronze eyes will look down with that familiar twinkle from those honored heights.

BUT, adulation never stops, and years hence someone will try to explode your way not knowing it cannot be done.

YOU can smile to yourself, then shake your head wisely, knowing that a Legend never really loses, or dies, and having once been, Tar, YOU will always be.

YES, Tar is gone. But, if there’s a heaven, he’s up there now getting things going again at his corner store, leaning on the counter, bumming a cigarette from an angel, or leaning against the door frame watching the kids play tackle football in the streets.

He’s even got the powder blue Cadillac waiting for one of us kids (usually me) to do an “errand.”

YES, get it going up there, Tar. We’ll catch you on the other side, just after the fourth quarter, when our game is done!

This is dedicated to the SOTE  from The BTH who knew Tar and Loved him. May your memories of him be good ones. Mine are. 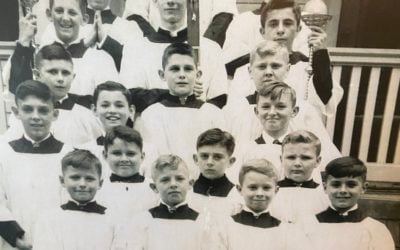 Above: OLM altar boys circa early 1950s – long before Bruce's time! In some of the stories of the... 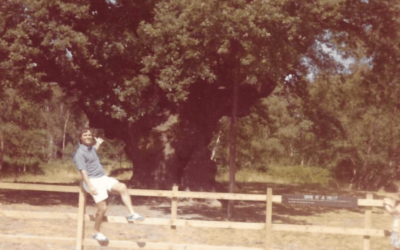 Above: Bruce in front of the Robin Hood tree in 1976, right before jumping the fence and climbing...