Swimming in a Hurricane: Maybe the Dumbest Thing Ever! 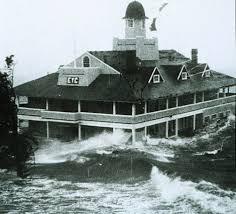 Above: The Edgewood Yacht Club in Cranston was inundated during Hurricane Carol, Aug. 31, 1954.

It’s the season of hurricanes, including Dorian, now plaguing the southeast. Hurricanes bring out the gawkers and the surfers in droves. This is a story of an East Greenwich lad who could not resist the siren call of the deadly Hurricane Carol, which blew through Rhode Island Aug. 31, 1954.

Brian had missed the infamous Hurricane of ’38. He wasn’t born yet. That one hit Sept. 21 that year and, in total, more than 600 people died. Westerly lost 100 and many of the 600 were from Rhode Island.

Parts of downtown Providence were under 10 feet of water. Winds exceeded 120 miles per hour and the storm surge in Narragansett Bay was 12 to 15 feet! As many as 9,000 homes and buildings were destroyed and 15,000 more suffered damages; 3,000 ships were sunk or wrecked. Total damages were $306 million ($5 billion in today’s money). Hurricanes were not named yet.

The day after Brian and his sister delivered the Journal-Bulletin on their paper route. Route #4, 88 papers and 44 Pendulums. There were downed trees and wires all over the place but their father had warned about staying away from the wires, so they had a sort of thrill being the “Pony Express” in a landscape that looked like it came out of a war movie or horror flick.

Years later Brian, wanting to experience the power of a hurricane, did perhaps his dumbest thing ever. He swam in one!

Yep, he enlisted one of his friends, Chimpanzee Cheeks, known as Chimp Cheeks to the guys on the football team. Cheeks was big – 6-4 and 250 lbs. – and not particularly swift. If Brian said it was something they could do, Cheeks went along. 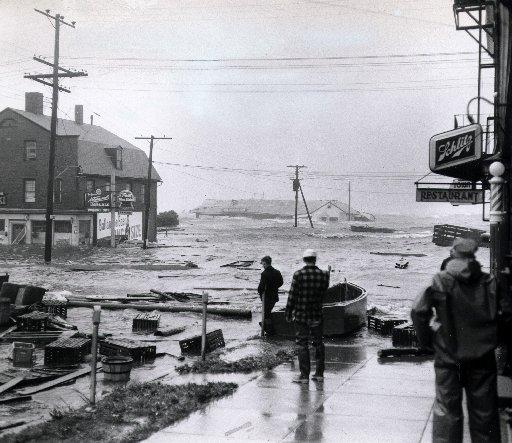 Seeing as the surf was not overly rough in the cove and bay around Greenwood Cove, they hopped into Brian’s car and drove a half hour south down to Green Hill Beach.

There the surf was roaring. You could hear the power! Soon, they would feel the power!

Being around water, fresh or salt, was nothing new to Greenwood Cove boys. They were raised on swimming, diving, going on, or under the water. Diving off the roofs, boats, docks and the like around Finn’s Greenwich Bay Quahaug. A little body surfing was a treat and they were always looking to spend a part of each day in the water, either down at the cove, up to the Bleachery, or over to Goddard Park.

However, on this day, Brian and Cheeks were going to get a little more than they bargained for.

After parking the car and stripping down, they raced to the water to dive in. It was like hitting the Bristol Colts front line. The waves threw body blocks, cuts and clips at the two boys as they high kneed it through the surf.

Brian broke out first and started swimming to the deep water. Cheeks followed. So far, so good. The waves were high and thrilling.They went up. And down. And over and under.

But, it was when they tried to swim back to shore that things got dicey. Hard as he might, Brian could not make headway going back in. Cheeks, much heavier and not in as good shape as Brian, was having an even tougher time.

Brian felt a little bit of panic, but it was here that his experience with swimming kicked in.

“Swim parallel to the beach!” He shouted out to Cheeks, doing just that as the words left his mouth. He was getting tired but found the water less resistant as he moved away from his point of entry. He glanced over at Cheeks and he got worried. Cheeks was not making headway anywhere. Brian did not think he could save himself and then go get Cheeks. He was too worn out. He managed to get to shore, and looked around for a pole or log, something to get out to Cheeks.

It wasn’t necessary. Using all the strength left in him, Cheeks made it to the water’s edge, where he lay completely exhausted, and looking like the white whale of Moby Dick fame. It was a close call. He could have been a goner!

“Uh, uuhhhhhhhh,” was about all Cheeks could utter. “Never again. Never again.”

Brian thought the same thing too. he had always thought the surfers stupid when they went down to Nahagansett Beach to surf during heavy storms and hurricanes.  He had proved to be almost, if not more, than stupid too.

He had experienced the Power of the Hurricane! The Power of Mother Nature!

It was Raw Power and it was scary. He had learned his lesson too.

Never again Cheeks. Never again! We’ll watch the future ones from the safety of our couch.