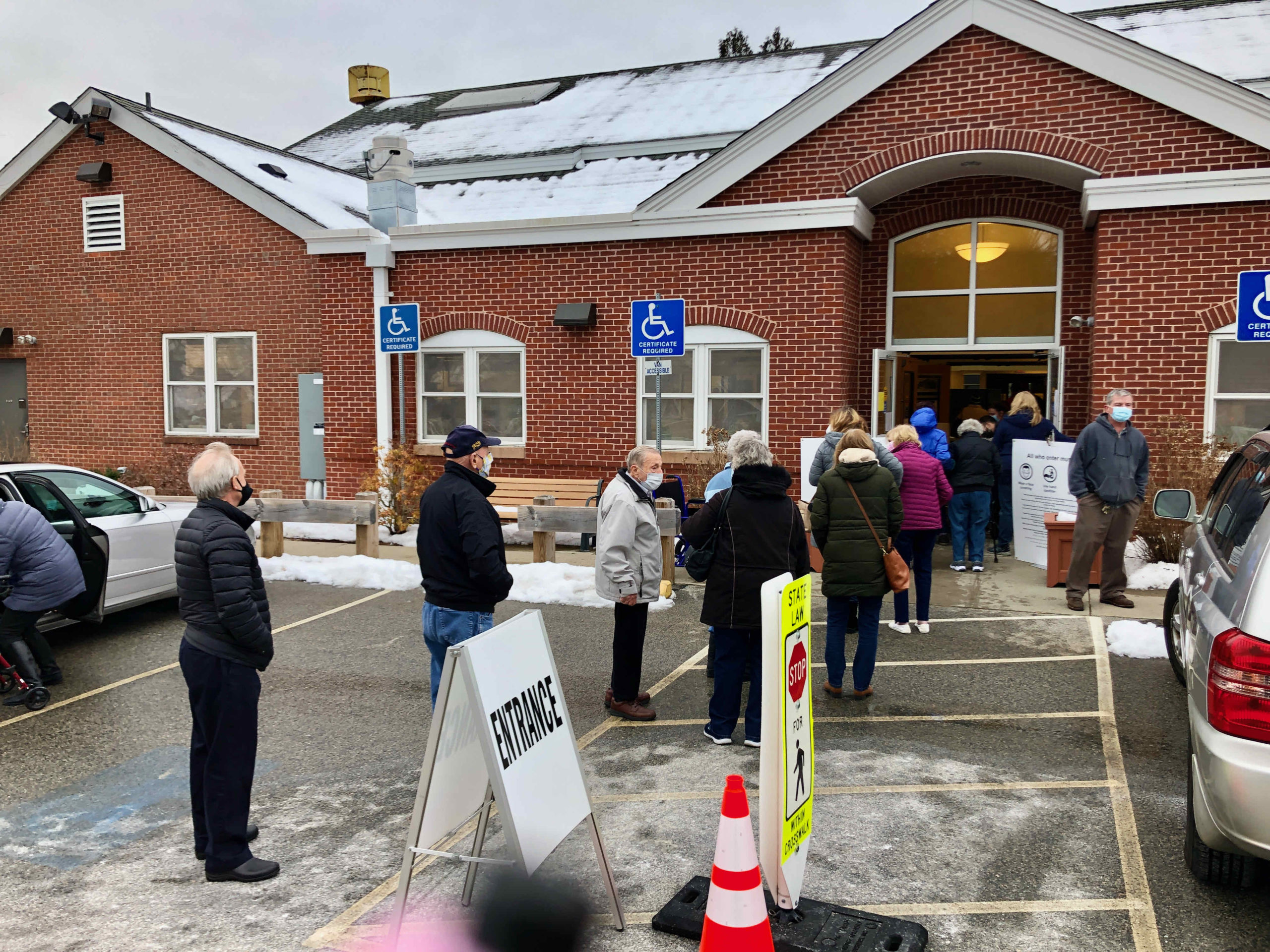 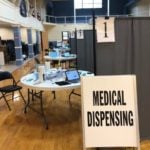 Up until then, the POD had been vaccinating health care workers, first responders and others among the categories in the first phase of vaccinations. Finally, however, the state had enough vaccine to start vaccinating those 75 and up.

The people vaccinated on Wednesday (and who will be vaccinated this coming week) are the recipients of a relatively small batch of doses the state released to the regional PODs the end of January. More vaccine is anticipated to arrive at the PODs by mid-February, and each municipality will be handling appointments for their respective residents. Here’s more information about the different cities and towns.

The clinic vaccinated around 700 people Wednesday. A few people were waiting outside when I walked over to Swift that afternoon to check out the scene. Fortunately, the weather was relatively mild and the wait wasn’t too long. (FYI: Clinic officials are asking those with appointments to show up 10 to 15 minutes ahead of their appointment but no earlier.)

I spoke with Marian from Cranston, who said, “I’m 78,” in response to my (nosy) question about her age. Her daughter piped up, “She’s 87,” which caused Marian to give her the side eye. “I’m excited,” said Marian. “You’ll get to go out to dinner and have your sangria,” her daughter added.

Inside, Herbert (Hub) Brennan, the clinic’s volunteer medical director, said the day had been a very different experience for him.

“This group takes a long time to get through,” he said, “Even I underestimated it and I do this every day.” (Brennan is a primary care doctor in East Greenwich.)

Part of the problem was that some municipalities left the registration up to the clinic. Earlier recipients had signed up via a link and had done their own registering. But after some of those people shared the link with others who weren’t supposed to be getting the vaccine yet, it was decided to limit access to the state DOH signup link. East Greenwich had called each recipient and registered them ahead of time but many other communities did not, which ended up creating a bottleneck at the check-in station.

Brennan said there was a line out the door and down the parking lot hill early on Wednesday, everyone waiting to sign in and no one getting the vaccine. That was solved by shifting a few people around and adding additional check-in clerks.

Also unlike at earlier clinics, there were more people with health issues on Wednesday (understandable because of their age) that required additional information. Still, once the initial bottleneck was relieved, Brennan said the vaccination process went smoothly.

Town Council members Caryn Corenthal and Mike Zarrella both volunteered at the clinic Wednesday and they both plan to volunteer again.

“We did over 700 people today,” said Corenthal. “It does make you feel good. Very nice people, very appreciative. It was fun but it was exhausting too.”

Corenthal, a teacher, will be getting the vaccine herself – all clinic volunteers are eligible to get the vaccine – next week. Zarrella, a criminal defense lawyer, got the vaccine already – getting a call at the end of an earlier clinic that they had an extra dose if he could get to the clinic in a few minutes.

“I did not want to cut before anyone but this was an extra dose at the end of the day,” he said.

“I absolutely loved volunteering. It was nice to see people get the vaccine.”

The POD at Swift will be administering more first doses next week as well as second doses to those who got the vaccine in January. For more information about vaccines, click HERE.