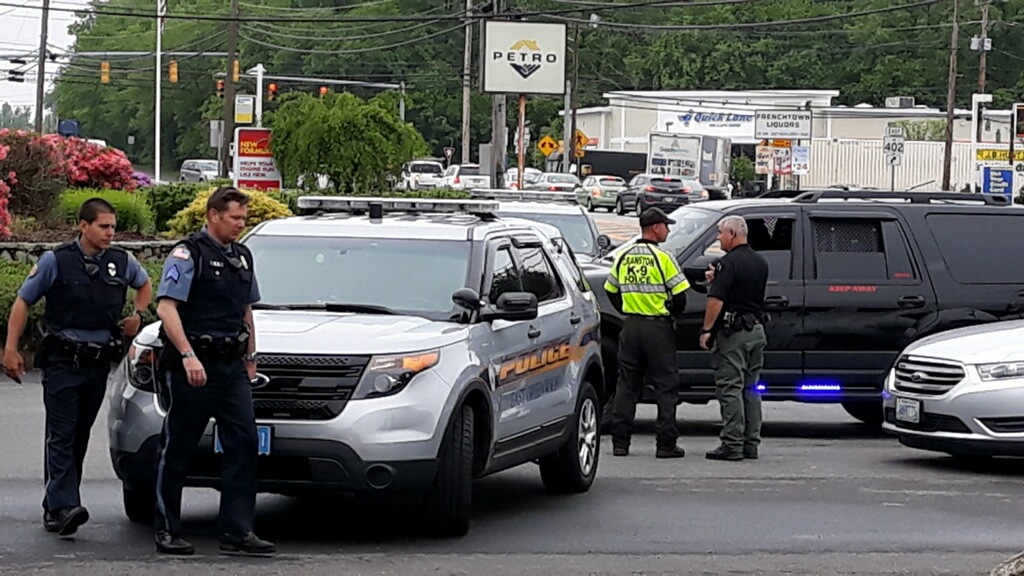 Above: EG and State Police at the Dunkin Donuts on South County Trail Thursday morning after taking the second suspect into custody. Photo credit: Chuck Ranney

Two suspects were arrested Thursday morning in East Greenwich after a car chase that started in Cranston, where they allegedly hit a Cranston police officer while fleeing a traffic stop. The chase continued through Coventry and West Warwick before ending when the suspects’ car hit another car on South County Trail and Frenchtown Road, according to EG Police Chief Stephen Brown.

The driver, a woman, was taken into custody at the scene of the accident. The passenger fled on foot into the woods near Flood Ford, resulting in a 90-minute search that ended when he was found at the Dunkin Donuts at 2611 South County Trail. He was arrested without incident, Brown said. 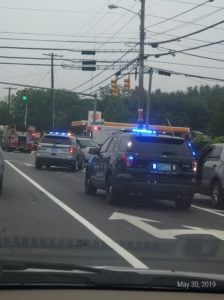 The scene of the accident that ended the chase at Frenchtown Road and South County Trail.

A report that the suspect had possibly forced entry at a house on Adirondack was incorrect, Brown said.

EG police joined the chase once the suspects entered East Greenwich. The driver of the other car involved in the accident that ended at Frenchtown Road was taken to the hospital. She did not appear to have been seriously injured. The Cranson police officer was also taken to the hospital; there is no word on that officer’s condition at this time.

The incident took place during the morning commute, creating significant traffic delays in the area. One resident, driving her son to the high school just before 8 a.m. saw the chase.

“I was taking my son to high school and almost got swiped by a speeding car turning from Middle to Route 2,” she said.

(Thanks to Chuck Ranney and Bethany Hashway for their help reporting this story.)