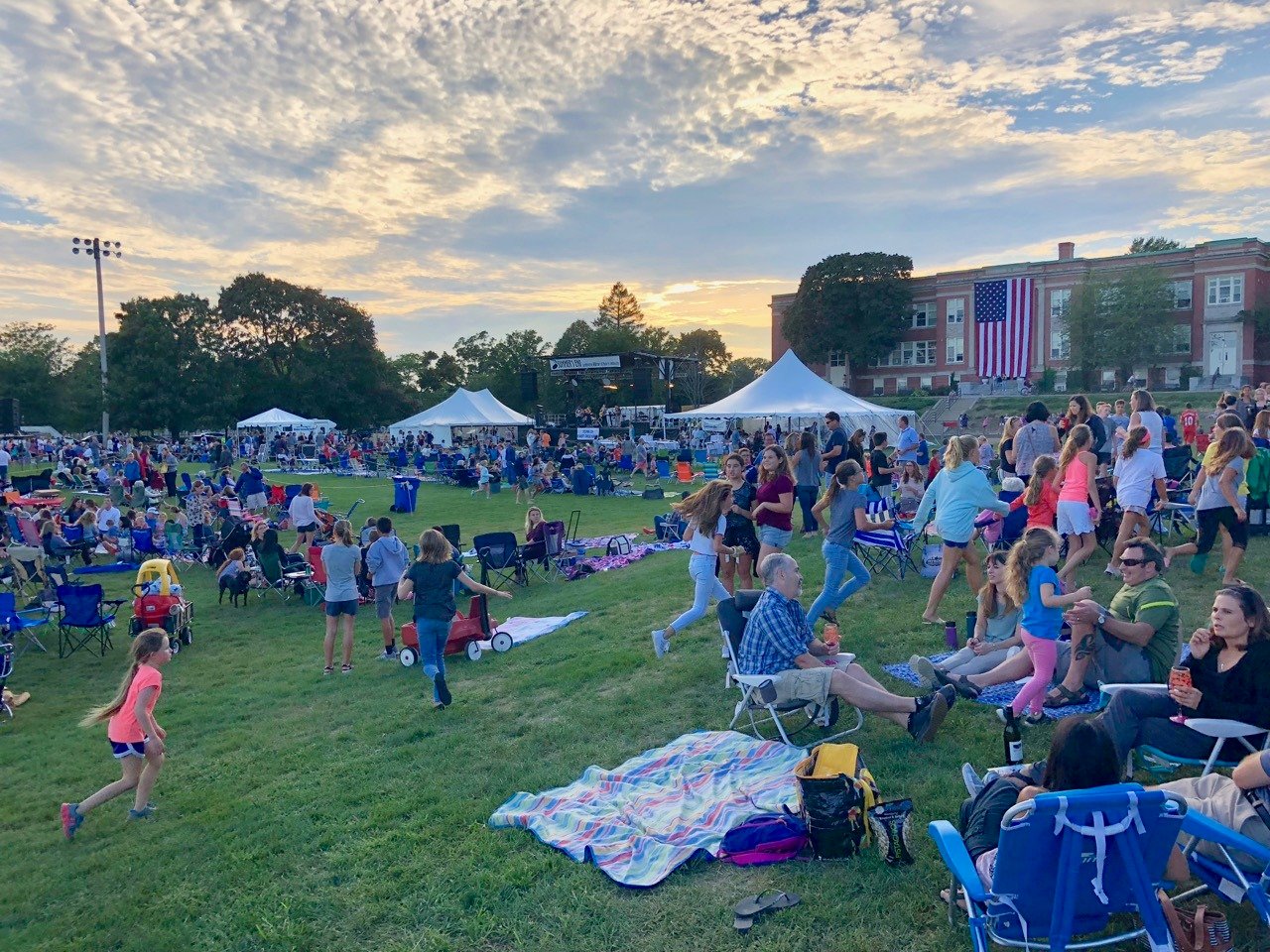 Labor Day weekend is just a week away, which means the 24th annual Summer’s End open-air concert at Eldredge Field is coming up fast. The event, on Friday, Aug. 30, offers an extensive schedule of performers, starting with Keith Munslow, a children’s performer, at 4:30 p.m., on through to the Navy Band performance starting at 8 p.m.

The Keith Munslow performance is courtesy of COA, Cultural Organization of the Arts, a nonprofit that brings arts programming into the East Greenwich public schools. It was the brainchild of COA executive director Danielle Salisbury, with the idea that COA and SAFO (the Summer’s End parent organization) should combine efforts.

Much to her surprise (and delight), in looking through the COA archives recently, Salisbury learned COA had been part of Summer’s End for many years, all the way back to the beginning in 1996, when COA donated money for a children’s performance. COA also initiated the popular Summer’s End Children’s Parade. At some point along the way, the collaboration ended. Now it’s back.

“It’s been an exciting opportunity to come together again,” Salisbury said.

The field at Eldredge School in downtown East Greenwich opens at 4 p.m. Aug. 30 (rain date Aug. 31). Picnics are welcome; pets are not; flashlights are wise. While Summer’s End is free, and has been for all its 24 years, the organization survives on donations from both businesses and individuals, as well as a $5,000 grant and donated services from the Town of East Greenwich. If you appreciate the performance, consider making a donation at the Summer’s End website here. Here’s the schedule of events: 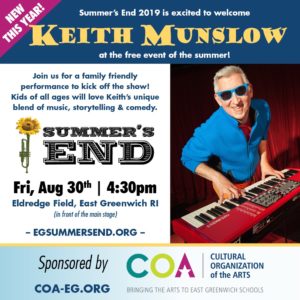 In partnership with COA, Summer’s End is happy to welcome Keith Munslow to the show! Keith’s performances expertly blend art, comedy, music, and storytelling for a show kids of all ages will love! Find him in front of the main stage at 4:30 pm!

Visiting Wine returns to the Summer’s End stage! This trio opened last year’s event and we are excited to hear them again. They blend smooth harmonies with Southern stomp and holler for a sound with depth and energy. Their self-titled album was released in July 2018, and is available on all major streaming platforms.

Lainey Dionne is a Providence based cover artist and singer/songwriter. Her debut record, Can’t Refuse – EP, was released in 2016 and is available on iTunes, Spotify, and other streaming services. She writes the “sort of music that immediately makes you forget that you left a burning oven on, or should be doing something productive. Music that will make you forget about everything else and just listen” (Verge Media).

Paul Colombino has been playing guitar since the age of 12. He has a great deal of facility with all styles of music from classical to jazz to folk and rock and roll. He has been a composer for more than 20 years and has written many songs and instrumental pieces as well as arranging music for bands and vocal groups. Paul’s live performance includes his own material as well as tasteful covers of classic rock, folk, and pop tunes spanning the last three decades.

The Naticks are a five-piece indie rock band from Rhode Island. Three of its founding members began jamming together in 2007, including playing several shows under the name “Juice.” In 2015, the group refocused, changing their name to The Naticks, and have been writing music and frequently playing live ever since. More recently, the band was named RI Monthly’s Best Local Indie Band in 2017 & 2018, and released their first album “Place Of Searching.”

With lifelong backgrounds in music, Ginger and Charlie Kroll began playing acoustic covers together when they met in 2015. Ginger started voice lessons at 13, and as a professional actress has appeared in film, stage, and TV (including the Sopranos, Guiding Light, and Notorious), while Charlie has played rock, acoustic, and classical guitar since age 10. At their wedding in 2017, the duo played a “first song” instead of a first dance, and today play a mix of soulful and upbeat acoustic covers at venues around NYC and Rhode Island.

The Navy Band has always been an integral part of the Naval presence in Newport, dating back at least to the Civil War period. Navy Band Northeast was established in 1974, and is one of 13 official bands of the United States Navy worldwide. The band is attached to the Naval War College on board Naval Station Newport, Rhode Island, and serves the military and civilian communities throughout the Northeastern United States. Navy Band Northeast provides a wide spectrum of musical entertainment. Whether it is the traditional sounds of a military marching band, the swing of jazz, chamber music, or the contemporary and popular music of today, Navy Band Northeast has a band for most any occasion. Each ensemble inspires patriotism, elevates esprit de corps, and fosters pride in the United States Naval Service.