Monday, July 1, was a family reunion of sorts on the turf at Carcieri Field: the EGHS field hockey family. Seven teams came out to play in a round robin tournament, with players from 14 to 53 years old. That 53-year-old was none other than the grand dame of EG field hockey, Deb Sylvia McMullen, who’d put the whole thing together.

After years of unsuccessfully trying to organize an alumni vs. current team game, McMullen hit pay dirt by inviting all past and present players to form their own teams. In total, there were seven teams. Each team needed at least seven players (six on the field and one goalie) and they played six 15-minute games. There were three alumni teams, three current player teams and one team of future players (the incoming Class of 2023).

Perhaps the team who had the most fun also spanned the biggest age range. The Relics consisted of players from 1983 (McMullen) to 2011 (Tracey Mason).

“The Relics stole the show with their enthusiasm,” admitted McMullen. The team tied for fourth place.

The Class of 2020 came in third place and Team Camo (recent alumni) placed second. Kaley’s Team (members of the classes of 2015, 2016 and 2017) were the undefeated champions. It certainly didn’t hurt that Kaley is Kaley McMullen, just off a four-year college field hockey career at Fairfield University. “It was so much fun,” she said. “It was like reliving our glory days. Our competitive spirit came right back.” 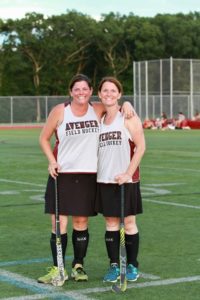 For the Summer Send Off, Neville and her sister Carrie Moule Simonetti both played for the Relics. There were several of two-generation players competing: mothers and daughters, aunts and nieces.

Alison Shunney played goalie for the Relics. While her daughter is a rising star at the high school now, it was Alison as goalie who wowed her teammates at the Summer Send Off. “Alison Shunney was unbelievable,” said Neville. “She was diving, she was flying across the goal to save the ball. It was like she had just been playing yesterday.”

“She played goalie like nobody’s business, “ McMullen said of Shunney, who was named her team’s MVP. McMullen added that the Relics probably “would have gotten destroyed” without the Mason sisters, Tracey and Kellie.

What made the evening so memorable, however, was the link all the players had both to their time at EGHS and to their coach, McMullen, who’s been leading the field hockey charge since 1987.

EG coaching legend Art Kershaw asked if she’d help coach the field hockey team. She remembers telling him, “I haven’t played field hockey in four years, but I’ll give it a shot for you.”

She was named head coach one year later and she’s been there ever since. Ironically, McMullen didn’t even play field hockey her freshman year at EGHS. She’d been a soccer player.

“I knew they wore skirts and that was kind of weird” – McMullen was a tomboy – “but I’m going to try it next year,” she recalled telling her freshman self.

For Neville, she’s excited her daughters may get a chance to play for McMullen when they get to the high school in 2021.

“Deb’s the link, she is the thread through every single player that was there,” Neville said.

McMullen has already put out the date for next year’s Summer Send Off: Monday, June 28.

“I am hoping to have two divisions – really old and not really old – to try to encourage more players to come out,” she said. “We’re pretty excited about our little tournament.”