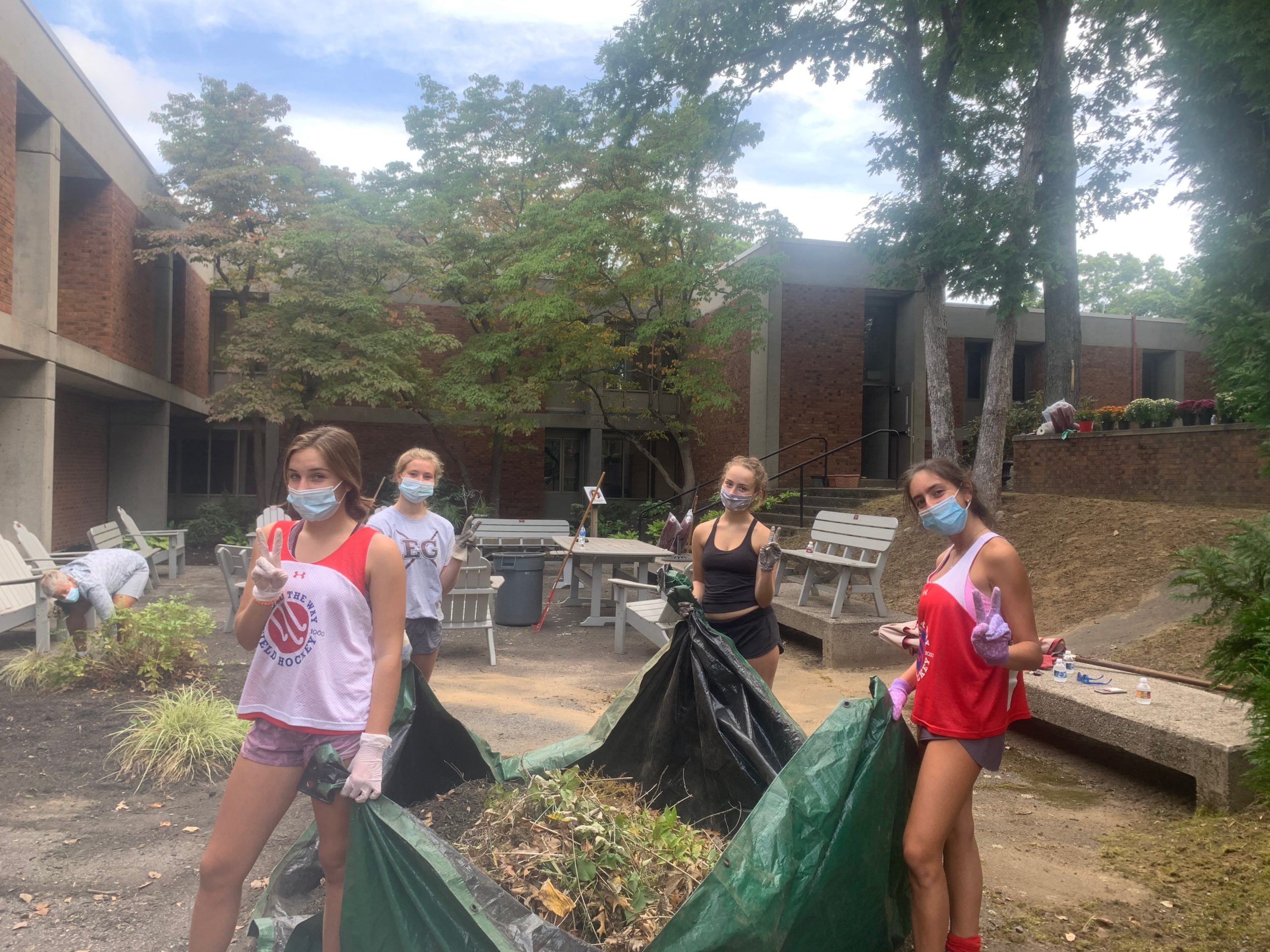 Nan Shea waited until Gov. Gina Raimondo announced in-person school was a go Monday before springing into action, organizing a clean up of the courtyard at the high school so it could be used when students return later this month. (The School Committee approved a return to in-person school Tuesday night.)

Tables with new umbrellas in the refurbished EGHS courtyard.

Just 24 hours later, the courtyard work was done – with the help of 10 staff members and a couple dozen student volunteers.

As it happens, Shea had been planning the courtyard clean up long before COVID-19 and “Bring it Outside” were a thing. Literally central to the school, the courtyard has long been ignored and has been pretty much off limits during the school day. A corner of the courtyard got a makeover five years ago, in honor of “Mrs. Mac,” Carrie Maksymowicz, a beloved guidance department secretary who died of cancer in 2012 at age 53. But the rest of the courtyard was a neglected resource.

Ivy Day in June is the only event all year in which the space is formally utilized. Shea, as the EGHS PTG president, had set a goal to clean it up before last June’s Ivy Day. But we all know what happened last spring (#thanksCOVID). No Ivy Day, no clean up.

Until this week. Shea got Proscape Landscaping to donate several yards of mulch, science teacher Nicholas Rath put the word out to students, staff members got into the act and in short order the work was done.

Not only that, but they were able to make an outdoor teachers’ lounge (the indoor one is off limits this year). The new courtyard has seating and dining areas, umbrellas for the tables and bright-colored flowers.

“The kids were phenomenal,” Shea said. “It was a valiant team effort.”

How the courtyard will be used this school year will be up to the new high school administration, but the hope is that if students respect the area they will be able to have lunch and breaks out there.

Now Shea is turning her attention to the front of the building, which has gotten a bit more love in recent years so it’s not in such bad shape. But, she said, they could use some more chairs.

“There’s a lot of outdoor space that can be used,” she said.