Staying Safe While Walking or Riding to School 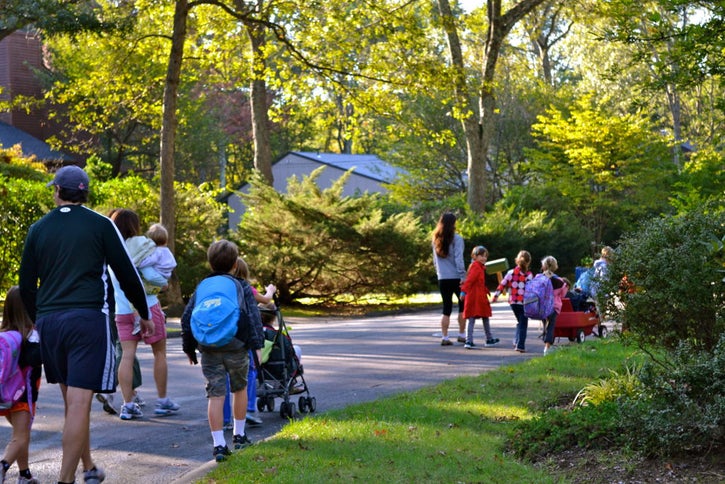 With the new school year upon us, many parents are examining bus pick up and drop off times, but others are talking to their kids about walking to school or riding the bus.

How do you teach your kids independence and keep them safe at the same time?

A student was hit by a car as she rode her bike home from Cole last fall. The incident went unreported because it involved a juvenile, but police released the report after a recent request.

The accident happened at the intersection of First Avenue and Main Street. The girl jumped from her bike and received only minor injuries, but her bike was caught under the car’s front bumper. The driver, according to police, had failed to look right and left before turning, hitting the bike.

Obviously, drivers need to pay attention, but walkers and bike riders need to take measures as well. First and foremost, according to School Resource Officer Chris Rafferty, walkers and riders need to take the safest route available to them and to make sure drivers see them. That can be by stopping, looking and waving, and waiting until your wave is acknowledged, a method advocated by RI Waves, the statewide pedestrian safety campaign. Rafferty also suggested walkers and riders wear fluorescent yellow vests, which would make you more visible to drivers.

Parents on the EG Moms Facebook page expressed a mix of enthusiasm and fear about their children walking or riding to school.

“I love that my kids can walk to Eldredge and they love it too! It is such a great experience,” said Seana Marcks on the EG Moms Facebook page. Marcks, a mother of four whose third child starts at Eldredge this week, offered some advice.

“My son has walked/biked to school for the past four years and I love it,” wrote Laura Gessman. “I can not think of anything better to teach so may life lesson without me breathing down his neck.”

“I don’t mind the children walking / biking to and from school in elementary school,” wrote Susan Gertsacov. “What I mind is that we have no crossing guards at major intersections like South Pierce (people fly up and down this street) and Middle or Howland and Middle.”

Some parents said the town should do more for bicyclists as well as pedestrians.

“I really would like to see EG prioritize biking and pedestrian safety! There are so many simple road improvements we could make. I currently let my sixth grader bike the country roads west of Route 2 to visit friends because it encourages independence,” wrote Lillian Picchione. “However, I would feel much more comfortable if we had striped bike lanes.” 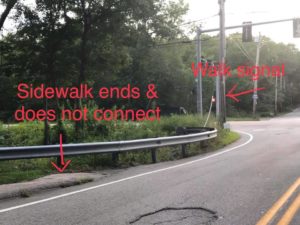 A photo submitted by Lillian Picchionne.

Picchionne would like to see bike-to-school groups and a safer crosswalk at Middle Road and South County Trail. “There is a walk signal there, but the infrastructure is in bad shape…. Without a good crossing there, it is hard to see many west side kids biking to EGHS.”

While the town has worked hard in recent years to improve and increase sidewalks, especially along major school walking routes, some neighborhoods are still without them.

“We need some sidewalks in the OLM hood!” wrote Dev Brumberger.

Crosswalks are also an issue.

“Downtown is pretty bad,” wrote Tara Law. “I am always worried I will get taken out with my child crossing in the pedestrian crossways.”

Some parents would like to see a return of bus service from areas like the Hill and Harbor to Cole. There was a bus for those neighborhoods for many years, but that bus was eliminated two years ago when the district reevaluated the entire bus system. District guidelines say students who live within 1.5 miles of Cole Middle School aren’t entitled to a bus. The state denied an appeal of the School Committee’s decision to eliminate that bus last September.

There are other steps parents can teach their children. One is for students to use a buddy system and to avoid jaywalking under any conditions.

“I love that my kids can walk to Eldredge … except in the winter there are no sidewalks in some streets or people who have sidewalks don’t shovel them,” wrote Kristen Carron. “The kids are forced to walk in the street and on some streets like Spring Street cars go faster than they should.”

A final suggestion from parents: if you have a teenage driver, remind them to SLOW down, particularly when driving on neighborhood streets.

Does your child walk or ride to school? If you have a thought, complaint or idea, share it here.