Above: Longtime library director Karen Taylor, who retired in 2020, cuts into her retirement celebration cake.

Submitted by the Friends of the EG Library 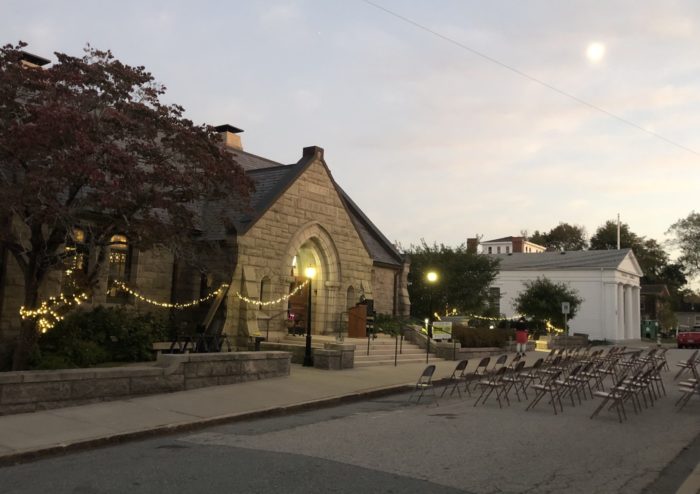 The front of the library prepared for a party celebrating former library director Karen Taylor.

Wednesday night at East Greenwich Free Library was a special October evening under the stars, with the stars! First came the annual meeting, with reports that assured patrons that all is well and a full re-opening is right around the corner. Second, guests had an opportunity to join in congratulating Karen Taylor, past library director, for her 40 years of devotion and service. Karen’s retirement undoubtedly makes her days a bit easier – but also opens a new door for Adrienne Girard, who organized Wednesday’s celebratory gathering and spoke of her own hopes and dreams for leading EGFL. Staff, friends, trustees, and patrons applauded and smiled.

Of course, the Friends of the Library Leadership Committee (FLC) attended the event with their own tribute to Karen, which we’d like to share with the EG News community. Here is a reprint of our collective sentiments, lovingly written by Gloria DePaolo, Friends of the Library LC Program Director. It was read aloud and presented to Karen on Wednesday night:

“For Karen, director of the East Greenwich Library was not just a career – it was a passion. She spent 40 years advocating for this library – promoting its value to the town, attending countless budget hearings and pestering local officials for more money than they wanted to give.

In the early 2000s she persuaded a rather reluctant Board of Trustees that this 90-year-old building was too small, not ready for the 21st century and simply not worthy of a town like East Greenwich. She managed a yearlong renovation and expansion program. The library probably didn’t shut down for more than a week during that time. And a few years ago, Karen got a sizable grant to make the front of the building handicap accessible, along with adding a pleasant garden space / reading patio.

In between those achievements she brought together a group of volunteers, asked them to form a Friends of the Library leadership committee, and let them do their thing. In return she got a volunteer group that never stayed home, never stopped pushing and rarely took no for an answer. The group was a force to be reckoned with. We believed in the mission and we wanted to lend a hand. Karen was an enthusiastic supporter of almost everything we proposed. Book sales of course, a jewelry sale, some controversial speakers, weekly mindfulness meditation classes, the festive Winter’s Eve art galas every December. We hung out in Karen’s office, in the community room and at the circulation desk, bothering the staff. Karen never shooed us away.

Karen contributed to every Friends of the Library Leadership Committee meeting. She attended every Winter’s Eve for nine years, and she even bought and shared some of the original art on exhibit. She sorted bracelets and rings and manned a table at our first jewelry sale. She stored, sorted and toted books for the book sale. She donned a brimmed hat and pearls for a Downton Abbey tea that filled the community room.

Karen supported our programs – the beer-tasting, a talk on the pros and cons of drone warfare, the before and after of the 2016 election, a tell-all on how to win recipe contests, a panel discussion led by the late Jim Taricani on the history of corruption in our state politics, a day of Korean food & culture, and much more.

Sometimes dissenting, but never disagreeable – her laugh was recognized throughout the library. Her office would have given Marie Kondo a serious heart attack. Stacks of books waiting to be catalogued, piles of folders and papers, post-its stuck everywhere . . . to anyone who dared to peek in, it was chaos. But it must have given Karen joy. She functioned effortlessly there. She knew where everything was, she never lost anything, and that was awesome!

She asked for little, but gave so much to the Friends of the Library Leadership Committee, to the Library, to the community for 40 years – and we are all grateful for her devotion to this place we cherish.

As Karen enjoys her retirement years, the Friends of the Library Leadership Committee hopes she considers Mr. Rogers, a sage for all ages, who said: “Often when you think you’re at the end of something, you’re at the beginning of something else.”

The Friends of the Library Leadership Committee most recent board members, Sandra Norris, Allison Perrelli, Paulette Miller, Cele Mark, Celene Healy, Mary Beth Dumouchel, Mary Welch, and Gloria DePaola – and we’re sure, our founder Carolin Goldman, as well as our past presidents Natalie Higgins and Lisa Sussman – say, “Happy beginning of something else and thank you, good friend, for leaving us happy memories in this gem of a building.”

See you at the Library! 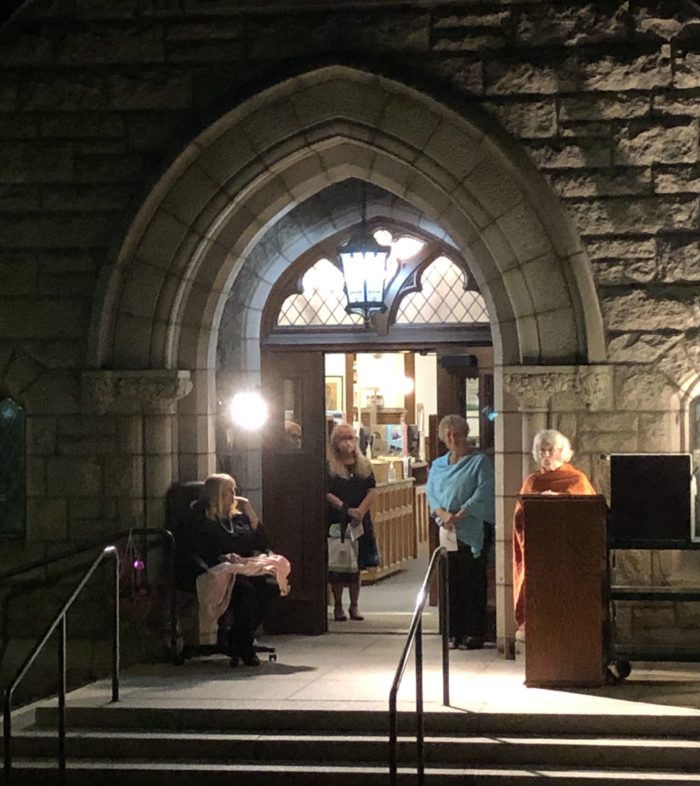 Gloria DiPaola, a member of the Friends of the Library, shares some remarks on Karen Taylor’s long tenure at the helm of the EG Free Library. 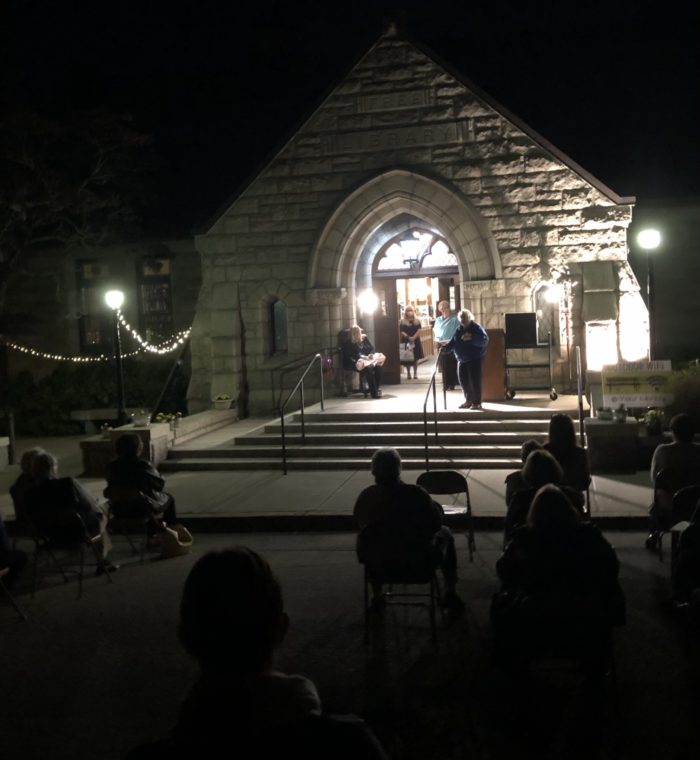 It was a perfect night to sit outside, in front of the library entrance that was just one of Karen Taylor’s legacies. 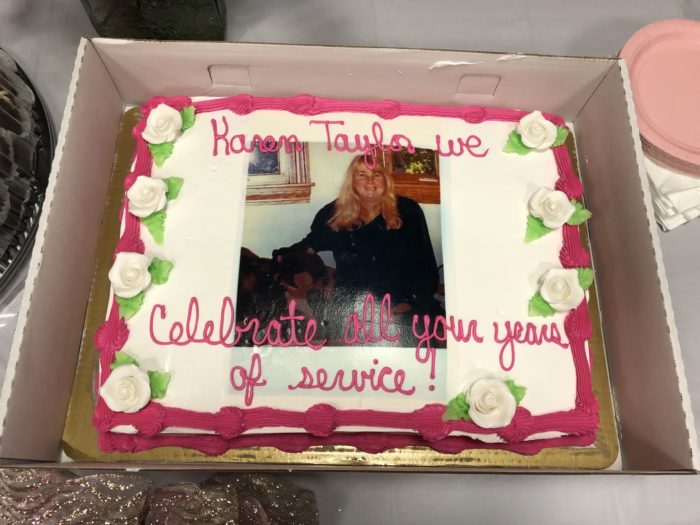 Above: Parker Goldman, East Greenwich resident and a student at the Wheeler School, demonstrates...