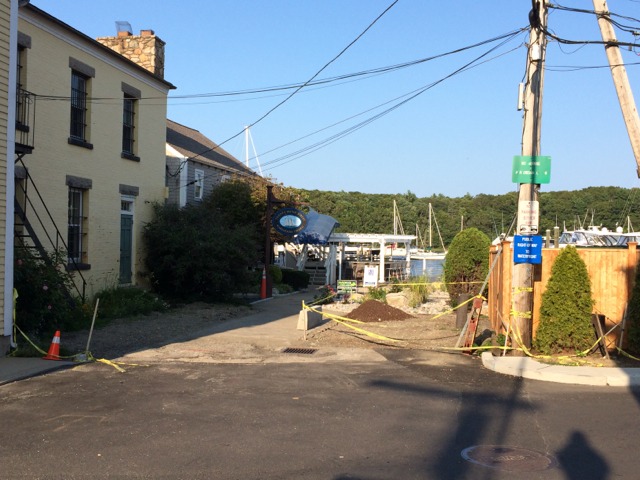 There’s still some police tape, but it no longer looks quite like a crime scene down at the King Street right of way. Blu on the Water property owner Sal Marinosci reopened a path from Water Street to the water and told town officials he will seek proper permits to complete the work.

“Sal stated that he still intends on submitting his plan to improve the right of way to the town and CRMC.  He backfilled some of the previous excavation for the curbs so that it remained safe for egress while he works on the plans and gets approval.  So at this point, the Town is awaiting his proposal,” said building official Wayne Pimental.

Marinosci and his son, Gary Marinosci, own the property at 20 Water Street. He has said he was only seeking to improve the area and expressed his frustration in July when the town issued a stop-work order because he had not gotten a building permit or a permit from the Coastal Resources Management Commission.

Marinosci said at the time he did not believe a permit from the town was necessary.

“We have done nothing but improve the area,” he said. The Marinoscis bought 20 Water Street in 2012; it has been leased to Blu on the Water since then. They also own 28 Water Street, which is leased to Nautika.

For Greg Dantas, who’s Rhode Island Real Estate Services occupies the bottom floor of 110 King Street (alias the Old Jail), the recent events have been frustrating, particularly what he sees as the haphazard management of the right of way.

“When the deck went up 35 years ago, that should have been when the town took a stand” on the right of way, Dantas said.

He was referring to the deck at 20 Water Street built by a previous owner that was extended southward blocking access from the right of way to the water. The town let the dock stand but required the business to allow the public access to the dock. When Blu on the Water opened in July 2012, it built a permanent bar in the area of the deck that is supposed to remain open. CRMC demanded that the bar be removed. It has since been replaced by a temporary bar and Blu owners say visitors are welcome on that part of the deck.

Struggles with the right of way at King Street go back to the 1980s, when the state first held hearings on all the rights of way in East Greenwich, including King Street. The town has enforced of a parking ban in that area since at least 1985, when then Town Solicitor David Sweeney sent a letter to the owner of the Warehouse Tavern at 20 Water St. directing the business to “take those steps necessary to maintain the right of way free of all obstructions.”

Marinosci declined to comment on the most recent developments.