A few ballplayers from the OLM team, circa 1954.

We made our own balls of paper and tape and played in small, backyard ‘parks’ where a 90 foot “smash” could be a home run. Some of us played it in garages, where hitting a hung up garbage can cover was a double and our bats were broomsticks and axe handles.

The main point is that we played. Each neighborhood had its team, and, thanks to Butch, who was a real organizer, we formed the Dedford League.

This trip down The Lane is dedicated to those teams, both “Above and Below the Hill,” the ScallopTown Raiders, Marlborough Street Marauders, South Marlborough Crusaders, Dedford Street Lions, Rector Street Jack Rabbits and the Hamilton Rip Shirts. And, of course, to Butch (Raymond ” Butch ” Moffitt), for all his work.

I can’t remember a day of my youth when I was not involved in some game, either with other like-minded guys, or working on skills against the barn behind my home. After school, on weekends, on vacations. If you drove around EG back then you’d see a bunch of kids on at least one, and maybe all, of the fields in town engaged in some form of athletic activity. 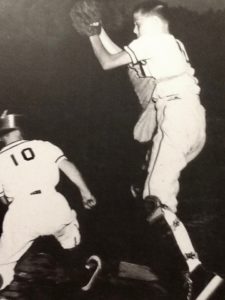 The author tags out an opponent.

Without adults it was a heck of a lot of fun. One neighborhood would challenge another, set up a date, time and place, and the game was on.

ScallopTown played their games on a cinder field next to the lumber yard. It is a site for boat storage now, right across from the EG Yacht Club. Dedford Street used the Quaker Lot, which now serves a parking lot for the EG School Department. The Rip Shirts used Proulx Field on Route 2 (complete with cow flop bases). Marlborough Street used Eldredge, The Crusaders used OLM Field and the Jack Rabbits used Academy Field.

Though it was loose knit, we took our games seriously. Then Butch came on the scene. Slightly older than the rest of us, he captained the Dedford Street bunch to which I belonged. We were a Spanky and Our Gang conglomeration, which did a lot of Spanky-type activities together. Author Bruce Mastracchio’s Little League picture at age 12, when he played for the Volunteers, sponsored by the EG Fire District.

Butch, with his myriad of ideas, brought some order to the loose-knit league. He was sought of the precursor to Little League. He had us get matching sweatshirts, which with the use of markers, crayons and paint, were transformed into Dedford Street Lion uniforms.

He drew up schedules and made cardboard scoreboards. He kept statistics. He arranged games with other neighborhoods. He coached and assigned us to our positions. He kept league standings.

Butch was a manager, promoter, statistician and player all rolled into one.

I suppose, if they had let him, he would have reported our scores to the newspaper. He may have even tried that, but, of course, they were really not interested in our kid games. (Funny though, a few years later, our Little League games were well covered complete with 8×10 glossy pictures pasted up in store windows in town).

It was a Charlie Brown existence before that bald-head ever set foot on the scene. We even had girls on our teams, in baseball anyway. I guess, you could say, we got a jump on women’s lib.

For our Dedford Lions, home park was The Quaker Lot. Left field had a wire fence and was quite a poke, maybe 370 feet or more. Right field was bounded by a stone wall, and was a short stroke of 180 feet or so, which prompted many of us, and our opponents, to bat left-handed so that we might launch one “outta there”!

We played game after game, and, if we weren’t going against another team, we split up and played against ourselves. If we didn’t have enough players we would play Rotation or Rollo or Hit the Bat.

There was nothing we wouldn’t try and in those lazy, hazy times the days were long and our lives seemed like they were going to last forever (I constantly use the saying, which I coined of, “28 hour days and 8 day weeks”).

If we only knew!

As the Whittakers once said, “Nostalgia is like an anesthetic; you experience NO pain, only a beautiful haze. When you grow older, what matters is not the way it was, BUT the way you remember it ! “

Another great tag out.

Remember, old friend, our kid games? How we whiled away the hours with World Series baseball, in your garage on Duke Street? The can cover was a double, and you were always the hated Yankees, while I, the Red Sox, who played from 1920 to 1958, all on the same team.

The pitcher had to duck behind a plywood screen, or lose his head when Mantle or Williams “tagged” one for a homer.

OUR Louisville Slugger was an axe handle pilfered from a father’s work truck, and we played by the hour, never really settling which team was best, though we were always sure which one really was, deep in the tabernacles of our soul.

Remember how people passing by would laugh at us in our bliss, or, maybe even smile, but have their memories jogged back to other years, another time, when they were us!

Writer’s Note: There you have it. Another tale from “Old EG,” the place of those 28 hour days and 8 day weeks! How we wish we could have them back. Please, pretty please. I would not trade one of those days for 10 days of the present or ALL the tea in China (can you even say that now?).

So to all of you out there who experienced, or know, or understand. May God bless you all and may you have your dreams. With all the love I can muster and In the Spirit of Crazy Horse (you have to read the book).

(Photographs courtesy of the author.)