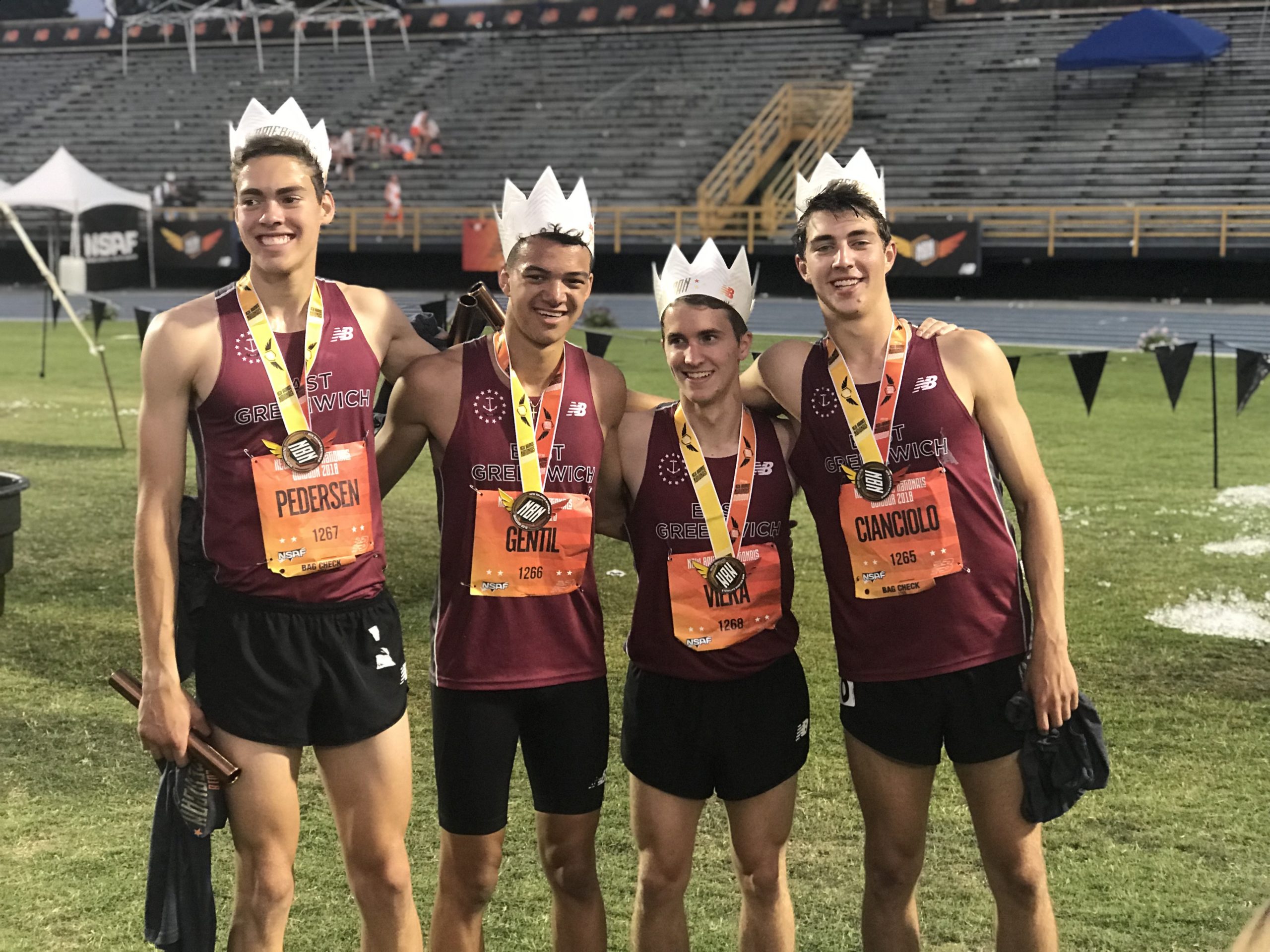 Within the space of just a few hours Saturday, EGHS scored a Division 2 state championship in Boys Volleyball for the first time in over two decades and a remarkable third place in the nation for the Boys Track 4×800 team.

It was a good day.

The Boys Volleyball team, led by a tight group of seniors, capped their unbeaten season with a 3-0 win over Cranston East, bringing their overall record to 19-0. 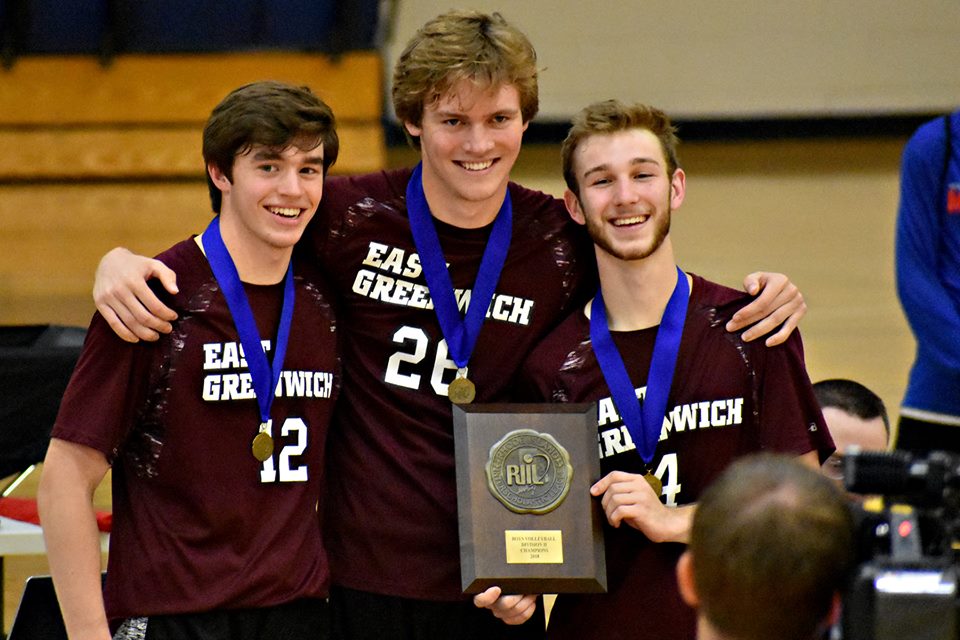 Coach Justin Amaral said the team had been working hard since last season, when it made it to the quarter finals. 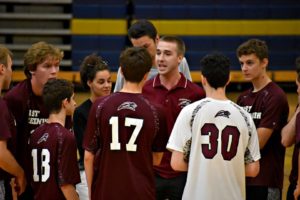 Coach Amaral talks to the team during the match. Credit: Dana Gee

“We knew we stood a good chance of going to the state final this year,” he said.

Boys volleyball has been one of those sports in EG where players often find it only in high school and not even by freshman year. That was the case of star setter Matt Plimpton, who first stepped on a volleyball court as a sophomore. 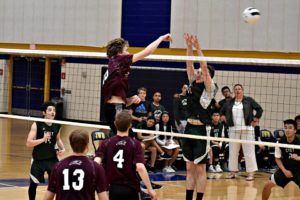 Amaral said Plimpton took on the new sport with vigor, working hard during practices but also at home. He got other kids to try the sport too. On Monday, Plimpton was named boys volleyball player of the year – for the whole state, even though he played on a D2 team. Other standouts on the team were Thomas Shaughnessy, Jason Mirandou – together with Plimpton, they were named 1st Team All State – Matt Sommer and Chris Rivera – both named 2nd Team All State.

While all those players were seniors, Amaral isn’t discouraged thinking about next year – the JV team won a state title this year.

“It’s good momentum for us moving forward,” he said.

Meanwhile, on the same day but 700 miles to the south, in Greensborough, North Carolina, the Avenger Boys 4×800 relay team of Quentin Viera, Colin Cianciolo, Jeffery Pedersen and Cebastian Gentil prepared to run the race of their lives.

Earlier that week, in a conversation with Athletic Director Chris Cobain, Cianciolo and Viera said they thought they could finish in the top six.

Given their training, past performance and mindset going into the race, Cobain said he thought they did have a good chance of that. 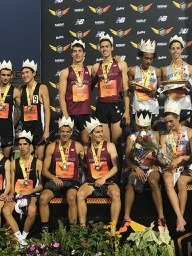 The third place finishers Avenger 4×800 team (center) with the other top finishers from the race Saturday. Credit: Jeff Cianciolo

Turned out, they exceeded their expectations, placing third, with a time of 7:35, a Rhode Island state record. For perspective, the winning team in that race (from Cow Harbor, New York) finished with the fifth best high school time on record.

“They all came up with the race of their lives,” said Cobain of the EG team.

“They worked really, really hard,” said longtime track and cross country coach Peter Dion. Dion didn’t directly coach the boys this year – that was done by EGHS alum Nick Ross (Class of 2010), an earlier Avenger track legend. But Dion was there in Greensborough that night, watching the boys he’d coached for years.

“They put it all together and all four legs showed up,” said Dion. Viera started off, finishing with a strong 1:55. Cianciolo was next, followed by Pedersen. Both matched Viera’s 1:55. They were in a great position going into the final leg. Gentil took it and flew, finishing with a time of 1:49:38.

“I think it was the second fastest time in the country,” Dion said.

“If those kids 1:56, it was never going to happen,” said Dion. “They all ran well and then C-Bas exploded, he ran the race of his life,” he said, using Gentil’s nickname. “They kept their composure, they ran smart. The joy on their faces, they were exhausted, all four of them. But the relief…”

All four members of the relay team graduated earlier this month so that is the last time they will run together. Gentil is set to continue running for the University of Iowa come fall. Pedersen plans to run cross country, indoor and outdoor track at URI. Cianciolo takes his talents to Babson College, where he will run track. Viera, alternatively, is joining the Marines this summer.