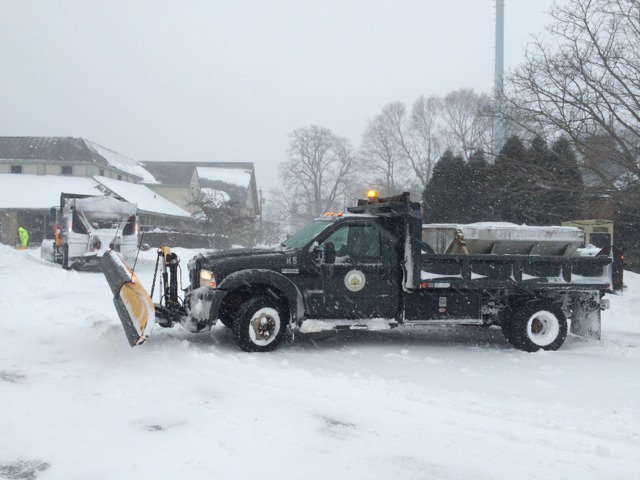 Public Works Director Joe Duarte has spent the past two and a half weeks watching his snow removal budget slip away.

“I haven’t got the latest numbers,” he said. “My superintendent hasn’t even had a chance to sleep never mind put the numbers together but we’ve either just expended everything, or we’re over as of Tuesday.”

He added, “Our budget was in really good shape – nothing was happening. Then, in two weeks, everything just disappeared. It’s been nonstop deliveries of sand and salt, nonstop overtime, nonstop equipment repairs. It’s a combat zone up at the highway facility.”

The snow started to fall Jan. 26 in East Greenwich and we’ve been hit with three significant storms as well as a couple more modest snowfalls in the days since, for something close to 3 feet of snow total. It could be worse, of course, we’re not Boston with it’s 5 to 6 feet. But the amount of snow and sustained cold has made this a winter to remember.

That said, Duarte is not unhappy with his department’s performance.

“One was definitely because of the storm, another one may have had issues before. We didn’t know but it showed up during the blizzard,” he said.

But that’s where the relationship between the town and the school department has paid off.

“We have the two vehicles from the school department working for us, so that’s working out very well. The town does all the plowing, but the schools have their own maintenance trucks, with a plow on in case they have to do any touch ups,” said Duarte. “We have two of their guys plow for us, with their trucks. So, during the blizzard and the snow storms, they come in.”

Duarte said he was impressed with how his men were holding up, considering the constant work of the past 17 days.

“It’s not perfect. People can’t expect to be walking on asphalt or concrete but it’s passable,” he said. “But, nothing’s melting. That’s the biggest problem. If there was a little melting in between then we wouldn’t have as much of an issue. But we plow and the stuff comes rolling right on the street again.”