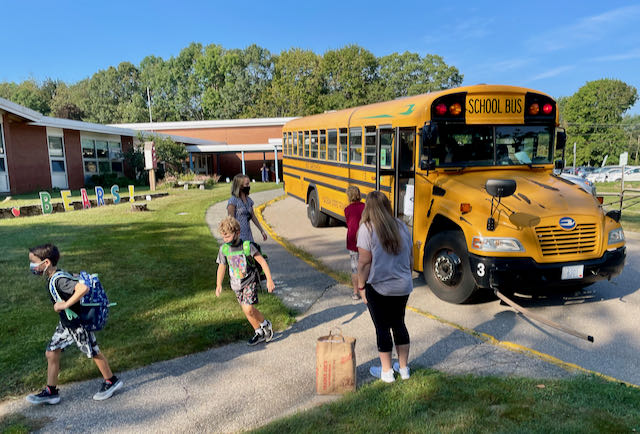 Above: Children come off the bus at Frenchtown Elementary Sept. 8, the first day of school.

On High Hawk Road Wednesday morning, children ran around and parents chatted as they awaited the arrival of that big yellow school bus to take the kindergarten through second graders to Frenchtown Elementary.

Many parents sounded grateful for the start of the new school year.

“You’re not seeing any tears,” said one mother with a laugh.

First grader Sophia Stiglic said she was excited and only “a little nervous” about school. She said she was planning to order her lunch – waffles – and glad to be able to see her friends.

There are no capacity restrictions this year on school buses, but students do need to wear masks while on the bus as well as while indoors at school.

The bus arrived around 20 minutes late but this was the first day of school – kind of expected! No one was complaining.

This year is “better” than last year, she said. “We all know a little bit more than we did last year. We’ve tried to resume operations as much as possible.”

That means this year there will be in-person open houses again and visitors will be able to come into the schools, albeit on a limited basis.

There are a couple of administrative changes this year: Melissa Centraccchio is the new assistant principal at Cole Middle School, coming to the district from Warwick, where she was assistant principal of teaching and learning at Warwick Veteran’s Memorial Middle School. She joins Principal Dave Tober at Cole, replacing Karen Sutherland, who took at job in Cranston. You can find more about Centracchio in Meyer’s field memo HERE. Also, the district will see longtime Meadowbrook Farms principal, Neil Marcaccio, in a new role: EGSD director of MTSS (multi-tiered systems of support). He will remain as MFS principal until a replacement is found. You can read Marcaccio’s letter to the MFS community here: Marcaccio Letter Sept 1, 2021.

One bit of normalcy could be seen at Eldredge Elementary Wednesday evening, with the return of its annual Back to School Picnic. The school grounds were positively alive with students, parents, and siblings – talking, running, playing, eating, dancing.

For Principal Dan Seger, it was a welcome return.

“It’s been so long since we’ve been able to have an event like this,” he said of the all-outdoor event. “While obviously we want to make sure we do this safely, it is nice to have families welcome back in a way that looks and feels like pre-COVID.”

The first day at Eldredge was, he said, “fantastic. We had a wonderful first day back. We had quite a number of new fourth and fifth grade students where this was their first experience at Eldredge. And of course all of our third graders, who of course did not get a chance to visit last school year, for a number of those students, this is their first real experience here.”

Seger acknowledged some traffic issues around the bus drop off but said he hoped those would be smoothed out in coming days and he said patience would be key.

As he talked, a parent called out greetings.

“My son was all smiles this morning,” the dad told Seger. “He had a great first day!” 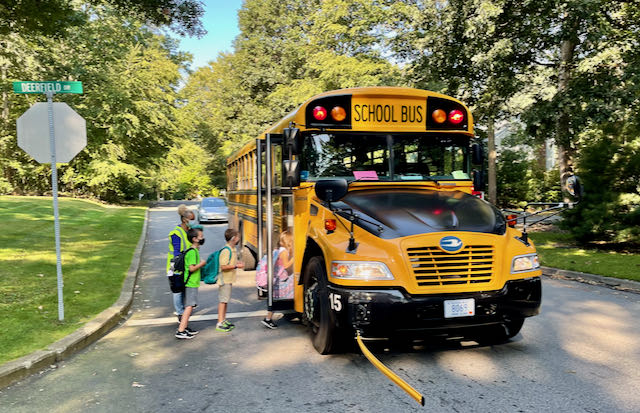 Frenchtown students board the bus on High Hawk for the first day of school. 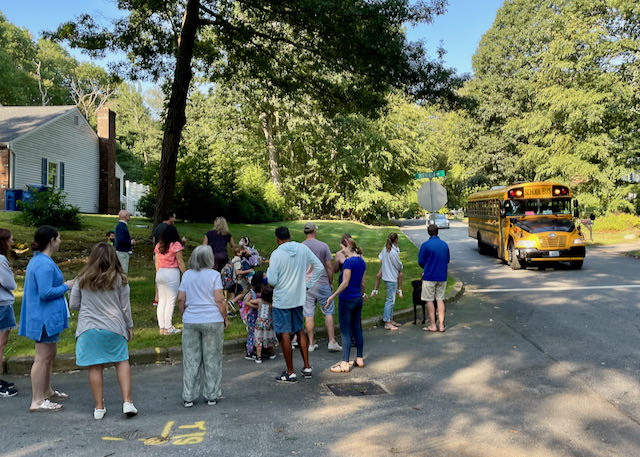 The bus arrives on High Hawk at Deerfield on the first day of school. 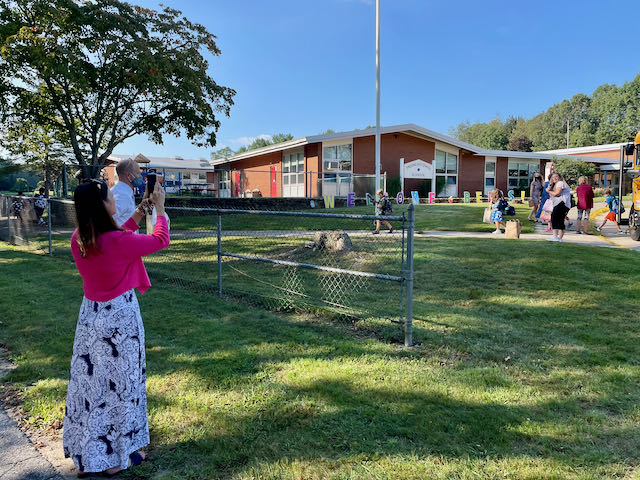 Frenchtown Principal Maryann Crudale takes a picture of students coming off the bus on the first day of school. 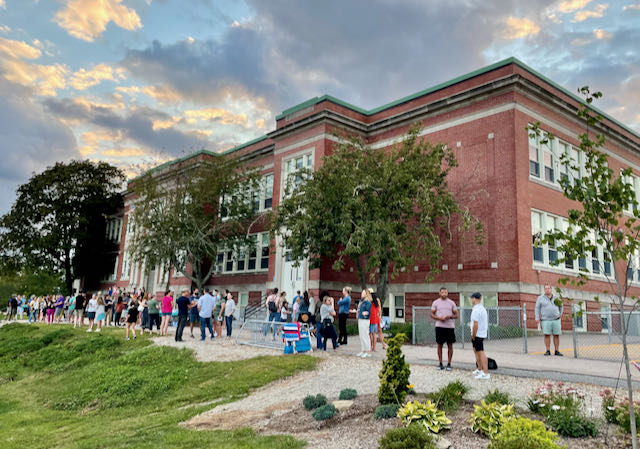 Turnout was strong for the Eldredge Back-to-School Picnic Wednesday. 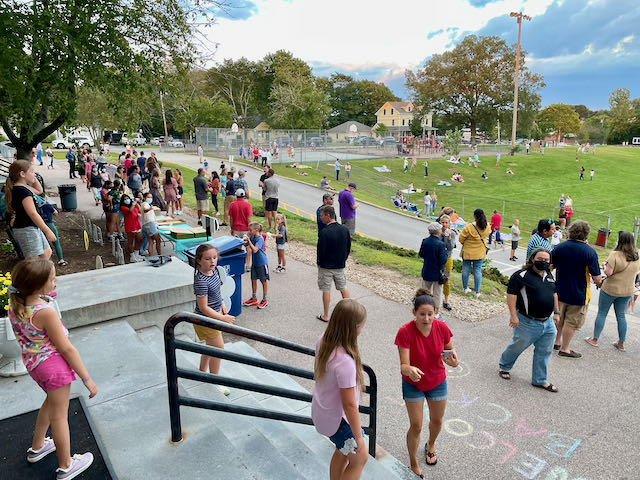 Eldredge students and families at the back-to-school picnic. 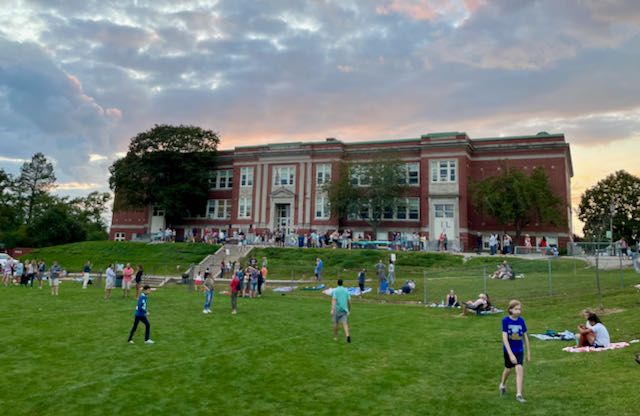 Eldredge Elementary School at the Back to School Picnic. 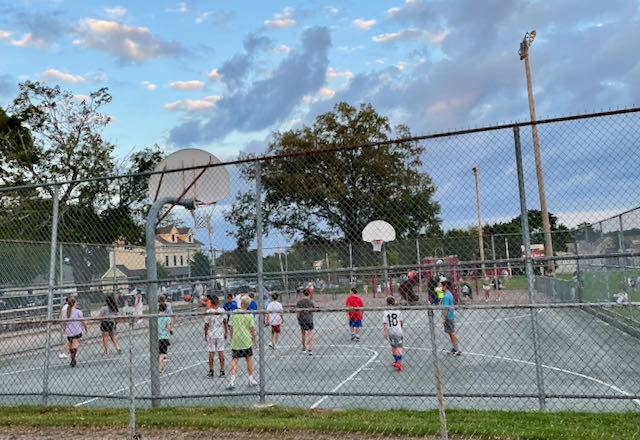 Kids on the basketball court during the Back-to-School Picnic Wednesday.