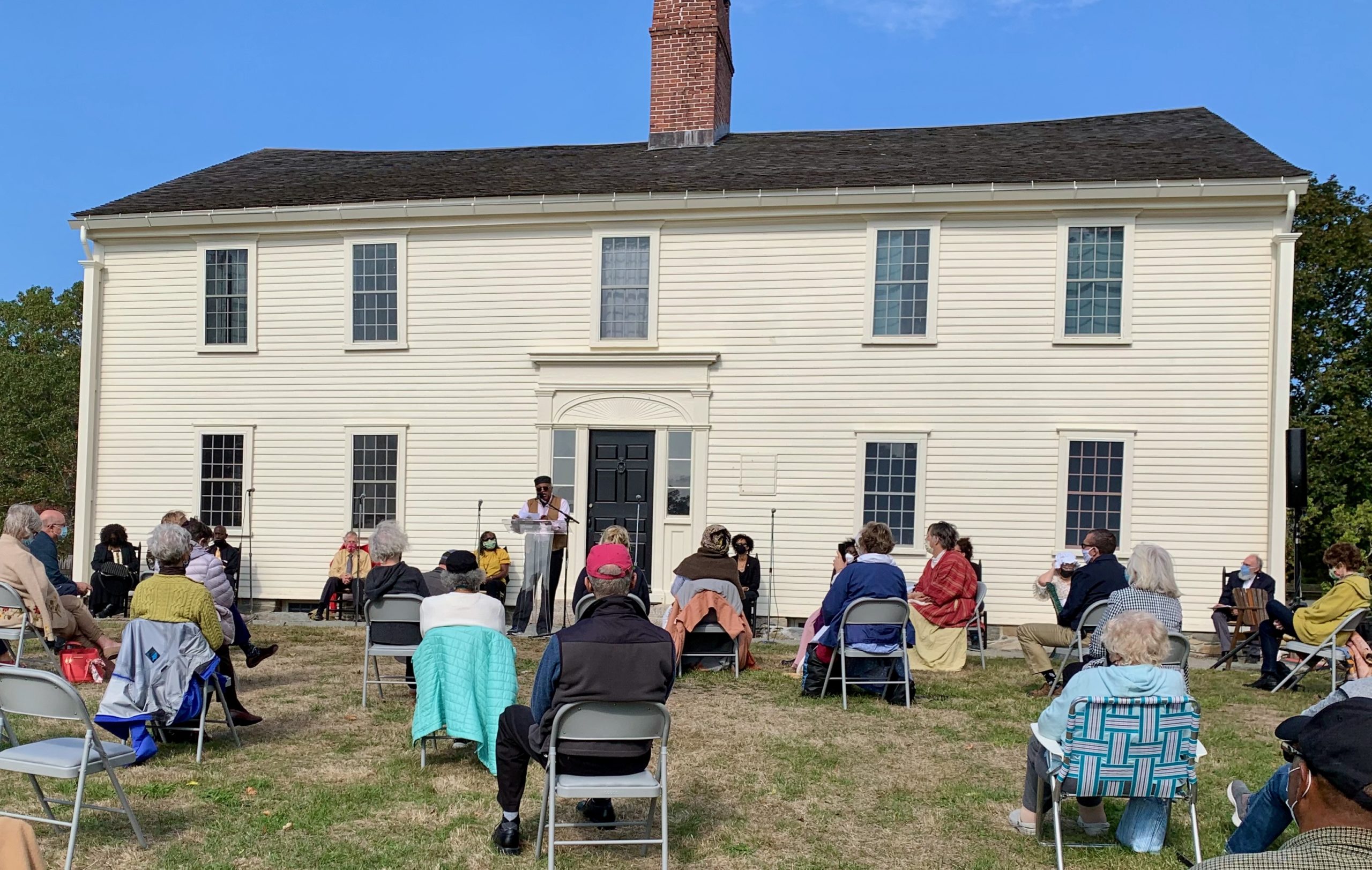 Smith’s Castle in North Kingstown is known for offering historical tours and educational programs about Rhode Island’s history from the 16th to the 20th centuries. It just so happens a large chunk of that history revolves around the transatlantic slave trade. Smith’s Castle, in fact, is the site of 200 graves of enslaved people who worked at the property over a period of 150 years.

That might not be very well known now but the people behind Smith’s Castle have decided to shine a light on all of its history, slavery included.

Earlier this month, the Rhode Island Slave History Medallion project (RISHM) granted Smith’s Castle a medallion to honor the lives of the enslaved individuals who once worked there. RISHM works to raise awareness of slave history in various locations all over the state.

“When you find out about Rhode Island history, you’ll find out that this is where [slavery] started,” said Charles Roberts, executive director of RISHM (see him in the picture at the top, speaking to the gathering).

The medallion, carved by Warren sculptor Allison Newsome, reads, “Rhode Island Slave History.” It features a carving of an angel and a QR code which, if scanned, will lead you to a site with information about the history of slaves at Smith’s Castle.

The event featured a series of speakers with connections to Rhode Island’s slave history. Members of the Smith’s Castle Education Program read several biographies and diaries of slaves who had worked and lived there. The enslaved men and women had arrived from the Caribbean and worked for the Updike family from the 1650s to the early 1800s. Back then, the land was called “Cocomscussoc.”

Loren Spears, from the Tomaquag Museum, stands beside the medallion.

Speaker Loren Spears blessed the land at Smith’s Castle in the Narragansett language, followed by a translation in English. A Native American herself, Spears is the executive director of the Tomaquag Museum in Exeter. She spoke about the history of the Narragansett tribe and her connection to it.

“Most of what you think of as Rhode Island is Narragansett land,” said Spears. “Our songs, our stories, [and] our ceremonies are all connected to this land.”

Spears marked the end of her speech of Narragansett history with a song from her childhood called, “We Dwell Here.”

To close the event, members of the Exult Gospel Choir from Mixed Magic Theatre in Pawtucket performed songs as a tribute to the property’s enslaved workers.

Roberts started the medallion campaign a few years ago, continuing the work of his ancestors, including his uncle, the recently deceased Paul Gaines, who was elected mayor of Newport in 1981, the first Black mayor in New England. “He’s my inspiration,” Roberts said.

But Roberts’s roots and illustrious family history in Newport go back to 1889, when his great, great grandfather purchased a house in Newport after bringing his family there from Culpepper, Virginia. Roberts said his great, great grandfather bought property as soon as he could because only men with property were allowed to vote and he wanted to vote. Roberts’s aunt, Eleanor Keys, was the first Black historian in Newport; she helped to form the Black Heritage Foundation.

“It’s been a life’s work,” Roberts said. Although he spent his career as a concert producer (working with such artists as Gladys Knight, the Four Tops, James Brown, and Luther Vandross), Roberts always felt the pull of Black history in Newport and Rhode Island. Not as a separate thing, but as a part of the larger narrative that for too long has been left off the page.

RISHM has dedicated medallions to a number of other historical sites across the state, including those in Portsmouth and Newport. The organization has plans to place three medallions in Jamestown, starting with one in December. Roberts is also working with the East Greenwich Historic Preservation Society to place a medallion here in East Greenwich.

Although Roberts has been working on this project for a few years now, this year he and the project have gotten a lot more attention.

“I’m committed to bringing awareness to the state of Rhode Island,” he said. “You have to have the eyes to see and the ears to hear before you become ‘woke.’ Finally we’ve come to a level of consciousness where we’ve started to look at each other as one people, one movement, one country.”

If you would like to find out more about the organization and its work, you can visit its website HERE. You can also read the biographies of the slaves at Cocumscussoc that were read at the event HERE.