Above: “Sea Captains Carousing in Surinam” by John Greenwood (1755) features prominent Rhode Island merchants and slave traders such as Esek Hopkins, Nicholas Cooke, Stephen Hopkins, and Joseph Wanton. Surinam, a Dutch colonial possession on the north coast of South America, was one of the chief foreign ports of East Greenwich traders. The painting is now owned by the St. Louis Art Museum.

It may come as a surprise to many that there was slave trading in East Greenwich. But while Greenwich Bay was not one of Rhode Island’s principal slaving hubs like Newport or Bristol, it still hosted its fair share of slave ships in the Pre-Revolutionary period.

In the September 1989 installment of the EG Packet, Thaire H. Adamson of the EG Historic Preservation Society points out that “there were less savory events at our waterfront like slave trading, a legitimate business as late as 1808.” McPartland, too, in her History of East Greenwich notes that “slave trading was prevalent and ‘black cargo’ was unloaded on the East Greenwich waterfront.”

One of the East Greenwich families to finance slaving voyages was the Frys, a name still known today (the Miss Fry of Miss Fry Drive, for instance, was Marion Fry, first woman to serve as Town Council president and an avid historian herself, who lived most of her life at the family farm on South County Trail). McPartland’s History explains that “Captains Benjamin and Samuel Fry, among others of this town, imported many slaves from Africa and from the Barbadoes” and that “trading rum for slaves on the African coast and the Barbadoes was common practice.” Benjamin Fry’s grandson admits to his family’s involvement in the business when he writes in his Genealogical Record of the Fry Family that:

“The town of East Greenwich previous to the Revolutionary War had a large coasting trade in which my grandfather, Benjamin Fry, was to some extent engaged; among other enterprises he imported a cargo of slaves from the coast of Africa, some of whose descendents still remain, bearing the family name of Fry.”

But EG’s involvement in the slave trade is not limited to the voyages that brought enslaved people to the shores of Greenwich Cove. In “Slavery, emancipation and Black freedom in Rhode Island 1652-1842,” Dr. Christy Clark-Pujara explains just how intertwined the colonial Rhode Island economy was with the business of slave trading:

“After 1730, most trades and professions in Rhode Island were directly tied to slaveholding and slave trading. Sailors, caulkers, sail makers, rope makers, and painters were employed by slave traders. Furthermore, local fishermen and farmers provided foodstuffs for trade with the West Indies in exchange for cash, molasses and rum … Coopers made barrels to ship the rum, which was exchanged for slaves who were sold in the West Indies and South America … The plantation societies in the Americas provided a market for Rhode Island’s farmers, tradesmen and slave traders.”

East Greenwich was, of course, no exception to this economic relationship. The Tercentenary history of EG published in 1977 explains that “merchants and sea captains from East Greenwich were active in the famous ‘triangle trade,’” and Dr. James E. Eldredge (quoted in Tercentenary) explains how EG fit into the framework mentioned above.

A painting of the East Greenwich waterfront by Dr. Daniel H. Greene circa 1870s. It is on exhibition in the Varnum House on Peirce Street.

He describes ships arriving in the harbor of East Greenwich from “the West Indies Islands with cargo of sugar or molasses” which “made business lively for a while with distilleries.” Eldredge also notes how the West Indies trade boosted the EG economy, remarking that “coopers, carpenters, riggers, and long shore men found abundant employment.” He goes on to explain how rum produced in East Greenwich was sent “to the coast of Africa – from thence to some island in the West Indies and from there home again as at first” and surmises that “this regular round of voyages and trading, if fully described, would shock the delicate sensibilities of our good people [of East Greenwich] of the present day …”

Tercentenary lists a few names of those East Greenwich mariners who engaged in the slave trade in some form or another. Some may be familiar, such as Silas Casey, William Stephan and Perry Arnold, the Fry family, Howland Greene, and Joseph Spencer.

A concrete example of an EG resident engaged in the triangle trade is William Arnold Greene, who “was engaged in trading to Surinam” and frequently sent out ships “loaded with potatoes, onions, cheese, and other products of Rhode Island industries” in exchange for cargo that “consisted of sugar, molasses, coffee, cocoa, rum and fruits of various kinds produced in tropical climates” (Tercentenary).

What becomes clear here is the importance of slave trading and the triangle trade to the early East Greenwich economy. Not only did the trade enrich wealthy merchants, many of whom were town founders whose names are scattered across street maps today, but it also gave EG farmers an essential market for their crops. East Greenwich tradesmen like ship builders, coopers, distillers, and carpenters all owe their financial success to the thriving trade with Africa and the West Indies.

Another way that East Greenwich benefitted from the slave trade was through taxes on human cargo which funded public works. Early Rhode Island traders had to pay a tax of three pounds per head for each African sold into the state. These funds, called impost taxes, were used for various infrastructure projects, the most famous being the paving of Newport’s streets. Another beneficiary of the slave tax dollars was the Town of East Greenwich.

The Rhode Island General Assembly passed an act in 1715 which specified that “£60 of said impost money be for, and towards the erecting of a substantial bridge over Potowomut River, at or near the house of Ezekiel Hunt, in East Greenwich [today Potowomut], and to no other use whatsoever. … And that Major Thomas Frye and Capt. John Eldredge be the persons appointed to order and oversee the building of said bridge” (quoted in History of the Negro Race in America from 1619 to 1880 by George Washington Williams).

So, not only did profits from the slave trade enrich EG merchants, farmers, and tradesmen, it also contributed to the very building of the town. Overall, it is clear that the foundations of East Greenwich are inextricably linked to the slave trade. Without it, EG farmers would have had less of a market for their goods, merchants would not have amassed the fortunes that allowed them to build their stately homes on the Hill, and tradesmen may have gone elsewhere seeking work rather than opening businesses here. In short, the slave trade was essential to the early success of East Greenwich, and without it, we may not be where we are today.

Have a tip or story idea? Contact edito[email protected]. Know someone who would like to receive a copy of our free email newsletter? Tell them they can sign up HERE. And if you can, consider making a donation – click the link below! 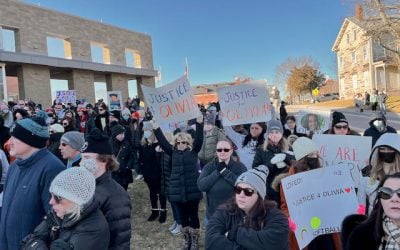 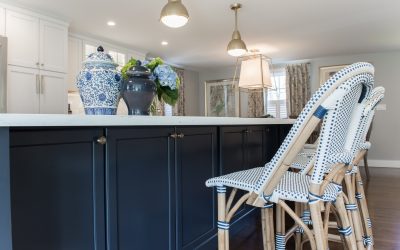 Above: Go Blue! Think navy, forest green, black this year.  Nathan Reynolds at Insperiors has some... 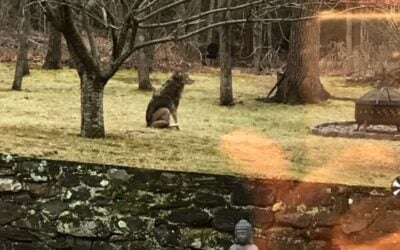 Coyotes in the ‘Hood

Above: A coyote just beyond the backyard of a house on Virginia Avenue that abuts the East...