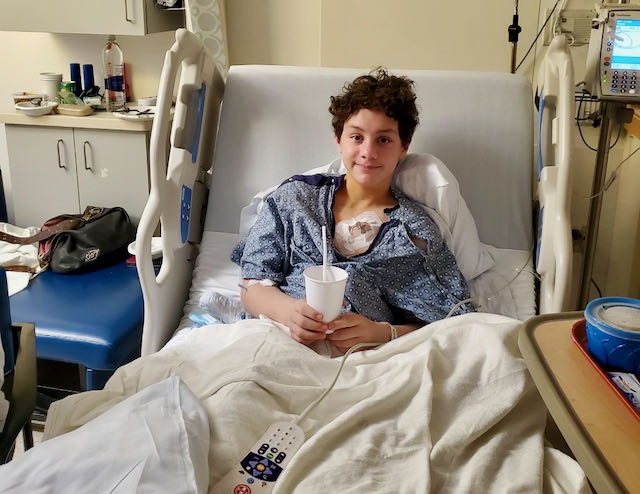 Above: Lucas Magnelli during one of his early hospital stays. Submitted photo

Lucas Magnelli had been going to physical therapy for a couple of years for this strange pain in his foot everyone thought was Sever’s disease, a condition that causes heel pain in growing children. Last April, however, Lucas and his mother, Nancy, learned it wasn’t Sever’s. Rather, it was Ewing’s sarcoma, a very rare bone cancer.

“There’s so many hard things about cancer,” Nancy said. “All the unknowns and anxieties about prognosis, relapse, tests, scans – it’s hard for anyone, but especially a child.”

On Friday, Aug. 5, Lucas will have “autograft” surgery in Boston, which involves removing a healthy part of the bone tissue in his upper leg and placing it near his ankle, where the cancerous tumor is. The hope with this surgery is that all the cancerous tissue will be removed from Lucas’s ankle and his leg will remain stable and functional.

Lucas has been taking karate lessons since he was six, and at eight years old he started experiencing pain in his left foot. After being told the pain was due to Sever’s disease, a podiatrist recommended physical therapy.

“The podiatrist said PT might help, but that just aggravated everything [for Lucas],” Nancy said. 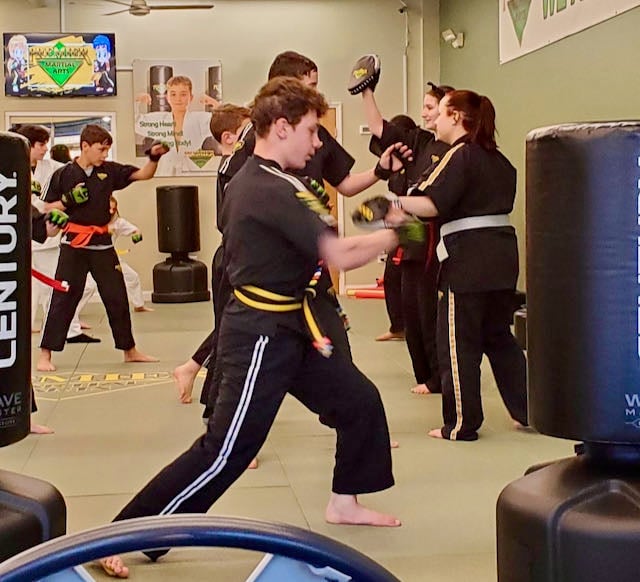 Eventually, Nancy decided to take Lucas to University Orthopedics where an x-ray showed Lucas had a tumor in his left leg.

“The doctor showed us how weird the left [leg] looked compared to the right,” Nancy said of those x-ray and MRI scans. “The bone was obviously just different from the right. It was foggy, it looked cracked.”

Lucas underwent a biopsy at Hasbro Children’s Hospital to confirm he had Ewing’s sarcoma. He had a lymph node biopsy a couple weeks later. That surgery was rough on Lucas.

“They didn’t sedate Lucas enough [so] he felt everything,” Nancy said of the biopsy. “Once you’re in the hospital world…you notice how many mishaps happen. People mean well and they’re human, but unfortunately a lot of mistakes are made.” 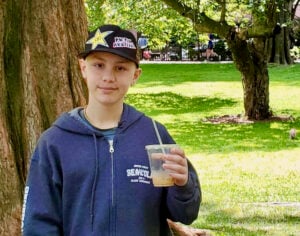 Lucas Magnelli enjoying a drink – getting nutrition has been difficult during chemo, which makes him nauseous. Submitted photo

So far, Lucas has gone through 6 of the 14 cycles of chemotherapy prescribed by his doctor at Dana-Farber Cancer Institute. Each cycle consists of specific medications Lucas needs to take, and he enters a new cycle of chemo every other week. The surgery waited until now so the chemo could shrink the tumor, but the chemo will resume after the surgery to make sure the cancer stays gone. It’s been a tough regimen.

“I’m petrified of that,” she said. “[Lucas] is a boy, he doesn’t think, he’s impulsive. I’m afraid he’s going to get out of bed in the middle of the night to use the bathroom and he’ll put his leg down.”

Doctors aren’t yet sure if Lucas will require additional procedures. The surgery Friday may provide some answers, Nancy said.

“[The doctors] mentioned he could need more surgeries to allow bones to grow or remove hardware,” she said. “There are many unknowns and risks.”

Having just completed fifth grade at Hanaford, Lucas is preparing to start middle school at Cole in September. Since he will be recovering from the surgery and people in treatment for cancer have weakened immune systems, he will probably be “going to school” virtually.

“The risk of infection is so high that even if he’s able to use his crutches, well … he’s still at such a risk,” Nancy said.

She said the EG community had been supportive of Lucas and her a lot these past few months, but things have been very difficult for them.

“Lucas is an only child and I’m a single mom,” Nancy said. “It’s a really lonely, hard place to be when you don’t have a lot of family to rely on.” 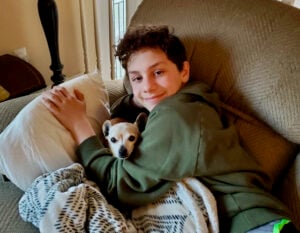 To make matters worse, Lucas had a pet chihuahua he was very close to, but the dog had to be put down just two days before Lucas’s diagnosis.

“That was Lucas’s buddy,” Nancy said. “And it all of a sudden took a turn for the worse [when Lucas was diagnosed].”

Friends have set up a Meal Train page and a GoFundMe for the Magnellis to assist with food and hospital costs.

Nancy expressed gratitude for all the food and donations she and Lucas have received so far, saying she hasn’t been able to work while caring for her son.

“Complete strangers have dropped off things, given us money,” she said. “Financially, it’s hard because I lost a couple jobs to COVID. And once your kid has cancer, you can’t work. It’s a full-time job.”

Nancy is searching for social workers, counselors or any mental health resources for Lucas as he battles Ewing’s and grieves the loss of his dog. She said Lucas’s mental health has recently worsened and that he could benefit from socializing with others, even if it’s something like learning to play an instrument or discussing Roblox (his favorite game).

She asks that anyone in the community with those connections reach her at [email protected].