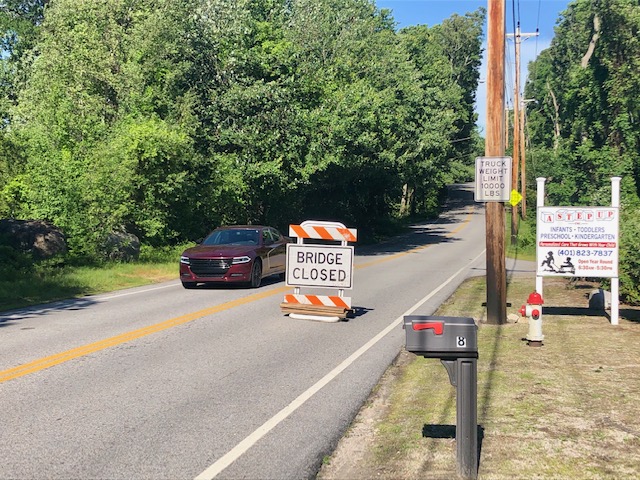 The southbound lane of Shippeetown Road as it crosses Route 95 is closed to traffic through July, to the frustration of some drivers and residents of the area. The state Dept. of Transportation is making repairs to the bridge, which is a key entryway into East Greenwich from Coventry. 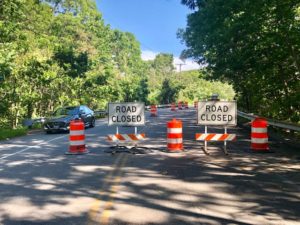 The southbound lane of the Shippeetown Road bridge is closed through July.

Full disclosure: While DOT did send out press releases, East Greenwich News did not post anything about this road closure until now. Our apologies.

Robert Vespia, who lives on Shippeetown Road, raised the issue during public comment at the Town Council meeting Monday night.

“It’s dangerous,” he said. Although there are signs leading up to the closed bridge, most of the time there are no police details. Occasional drivers are proceeding southbound as far as the bridge itself before then having to make a three-point turn to proceed via an alternate route.

On Monday, Police Chief Steven Brown said DOT initially had said they would pay for details. Now DOT was saying they didn’t need details, he said.

“We didn’t realize there was going to be a major disruption of traffic,” he said of when the DOT first alerted the EGPD. 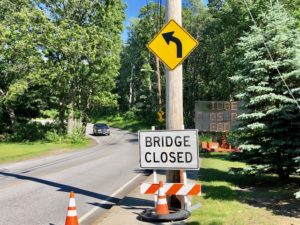 Signs on Crompton Road southbound just past the CVS at the corner with New England Turnpike.

On a visit to the area Tuesday afternoon, many cars came through driving northbound. Only one car heading southbound made it to the bridge and had to make a three-point turn. The driver, a resident of East Greenwich, was angry.

“They need a cop on each end or an employee holding traffic and letting you though,” she said. She said she did not see the signs posted just past the CVS on the corner of New London Turnpike and Crompton Road.

“It’s frustrating,” she said. “It’s not well thought out and not considerate of residents trying to pass.”