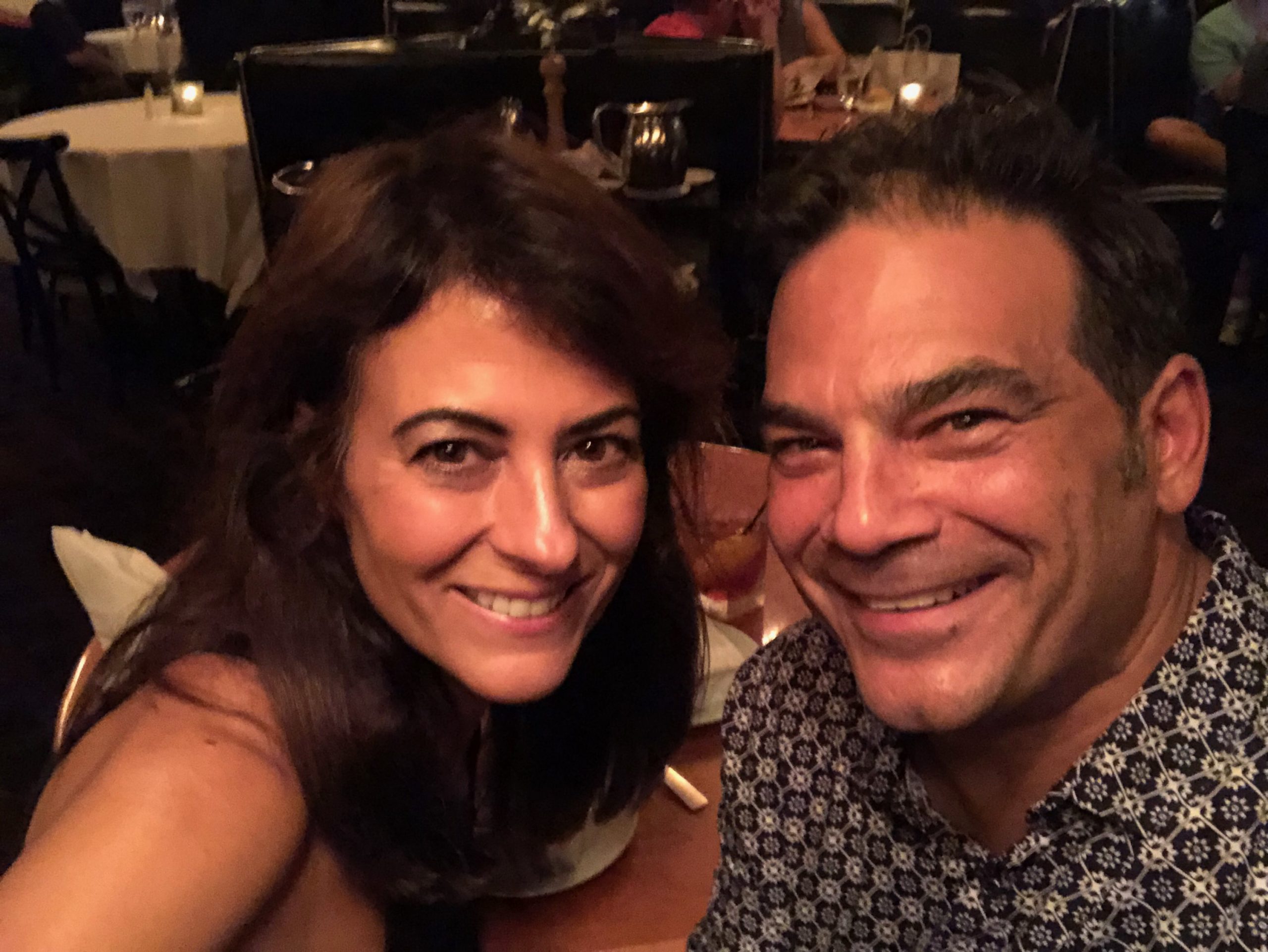 It’s February, so love is in the air. In honor of Valentine’s Day, EG News presents the courtship story of Dan and Camille Speca (above), with some musical accompaniment from REM.

Nestled in the back of a cafe on Main street, East Greenwich, locals Camille and Dan Speca sit side by side, exchanging laughter and playful nudges as they begin to recount the story of how they met. The Specas’ story unfolds with a rythme reflective of their dynamic; banter bouncing between them, Dan elaborating details and Camille setting the records straight.

Their story begins in the early 1990s, when Camille was living in New York City and Dan in San Diego. Though transpiring on opposite coasts, these were years marked for both by the first steps into post-college life, mostly spent in record shops and, as it happened, on an intimate message board called rec.music.rem. It was a place for like-minded individuals accessible on the digital platform Prodigy. A precursor to the internet, Prodigy was owned by Sears and allowed users to send private messages, play games, and read news.

This specific message board was “where nerdy fans of the band R.E.M. would talk about Michael Stipe’s undecipherable lyrics, alert everyone about upcoming TV appearances, and swap lists of live shows for trade on cassette,” explains Dan. There were 15 to 20 members in the group from across the country. Someone would post a request for the Denver 1982 show and if you had it you’d dub your cassette and send them the copy.

Tape culture was made famous by bands like Pearl Jam and the Grateful Dead but in the early ‘90s it was still a small underground group of people sneaking recorders into shows to capture audio or sometimes some really shaky video. “Back then, the whole process was slow. These bootlegged tapes were all shared via snail mail,” Camille said. She would set her alarm for two in the morning to turn over the cassette being dubbed so it could be ready to send out the next day.

In the beginning, Dan had a modest list containing tapes of not only R.E.M., but also shows by The Replacements, Hüsker Dü, The Dream Syndicate, and The Ramones. Fairly early on, Dan’s attention was caught by another rec.music.rem user known for her extensive list of R.E.M. shows as well as her exclusive inside line on R.E.M. fan-club swag. This impressive trader was Camille from NYC.

Over the course of the next three years, over private messages and trading lists, Dan and Camille began uncovering other common interests beyond R.E.M. record collecting. Rec.music.rem had become more than just a way to fill in the missing shows on their lists. This pre-internet technology would end up being the catalyst for the rest of their lives.

Remarkably, it was not until Camille one day spontaneously rang Dan on a pay phone from the East Village to discuss an urgent matter concerning the discovery of some rare footage did they hear each other’s’ voices. And only when planning to meet for the first time in New York City over a long weekend did they think to send each other photos of what they looked like.

“It was completely platonic at the time,” says Camille.

That weekend, “we spent every single minute together,” says Dan. By the time he returned to LA, Dan was “hooked on this Camille person!”

Within six months, Dan decided to leave his TV gig after a season wrap up of Power Rangers’ and move to New York City. Laughing, Camille notes that in every relationship, if you are committed to making it work, you each have to make sacrifices at some point. “But I wasn’t about to leave New York City!” And so, Dan drove across the country and soon after his tape collection followed in the mail. When Dan moved in with Camille, their tape collection doubled along with their trading operations.

Moving from one apartment in NYC to the next, they hauled their boxes of tapes, fitting them into every nook and cranny; a labor of love to be sure. Their collection included every show that R.E.M. performed from their first show in 1980 through 1986, consisting of around 600 cassettes, and people from all over the country were contacting them for dubbed copies.

Music has been the keystone in their relationship; from the days in NYC when the young married couple spent lunch breaks browsing record stores, went to concerts and made the pilgrimage to R.E.M.’s birthplace in Athens, Ga., to their current lives settled in East Greenwich, where they still both attend concerts and work in creative fields, Dan, a design director, is also president of the Greenwich Odeum. Camille is the creative director at Sports and the Arts.

Over time, the tapes receded into the background of family life and were relegated to the basement, stored neatly in their protective leatherette cases. “Today digitized shows can be easily downloaded and it’s not like we were pulling the tapes out to play them in the house,” reflects Dan with a shrug. Despite their ephemeral relevance to the Specas’ passion for music, the tapes remained.

“How could we part with something that had been such a big part of our life together, effectively serving as love letters during a most strange courtship,” muses Dan.

Some of the Speca tapes donated to the Rock and Roll Hall of Fame.

Just last year, however, after years of the tapes collecting dust and on the eve of their daughter heading to college, Camille and Dan felt it time for a new chapter for the cassettes as well. They donated their voluminous tape collection to the Rock and Roll Hall of Fame in Cleveland for safekeeping.

When Dan and Camille say that they “met online,” it feels misleading. And yet, at the time, this is exactly what happened. Camille explains how her parents really didn’t understand what was going on. “But Dan’s mom was unique, she loved it. She loved it so much that when I went out to California to meet her for the first time, she called the local press to take a picture and do a story on us.”

They both chime in to say that it never felt odd, rather organic.

Dan and Camille explain that compared to the online dating of today taking place on Match.com or Tinder, their experience was completely different. Unlike users of these dating platforms, “who are all like, ‘Hey I’m here to date!’” says Dan, the two of them were there for one specific purpose – “Tapes!” they say enthusiastically.

But it also wasn’t the equivalent to meeting someone in a record store. “There was no visual for almost three years,” emphasizes Camille. “If I wasn’t his type or he wasn’t mine, things would never have progressed.” She says that this unique beginning is one of the reasons for the longevity of their relationship. “I knew so much about her before we even met,” Dan says. Their relationship grew slowly from a shared passion, music. They speak to the value of putting yourself in spaces where you can meet people with common interests.

Perhaps the salience of love stories like this speaks to their power to act as blueprints for how to move forward, how to have a story of our own.

Camille reflects that most of their friends don’t even know the full story and assures me that they didn’t get married just because of their impressive collection of R.E.M. tapes. “What would it all have been for if we split up?!” Dan jokes, laughing. And of course, now the tapes are gone. Despite this narrative not retaining a central place in their lives, what is so beautiful about the story is precisely how the details of the Specas’ beginnings weren’t immortalized, that they grew together, grew out of the tape collecting years, and continue to grow with each future twist and turn.

In every relationship there is a waxing and waning and they don’t equally appreciate everything the other does. But when it comes to music, Dan and Camille know they can share something that excites them both. And even as the tapes no longer remain and they’ve moved on from trading lists, music is always something they will have to come back to.

“It’s the same old interests but it’s a new way of experiencing and enjoying them,” says Camille.

Sophia Richter is a local of South Kingstown, RI. Having just finished her BA at Alma College (Alma, Michigan) in May 2019, she has returned to Rhode Island to get more involved in her local communities. While pursuing her passion for the written word, she is also working in citizenship and immigration services for residents of Rhode Island,  involved with the Rhode Island Highland Pipe Band that rehearses at the Armory in East Greenwich, and enjoys filling her free time taking long runs and camping out at cafés.