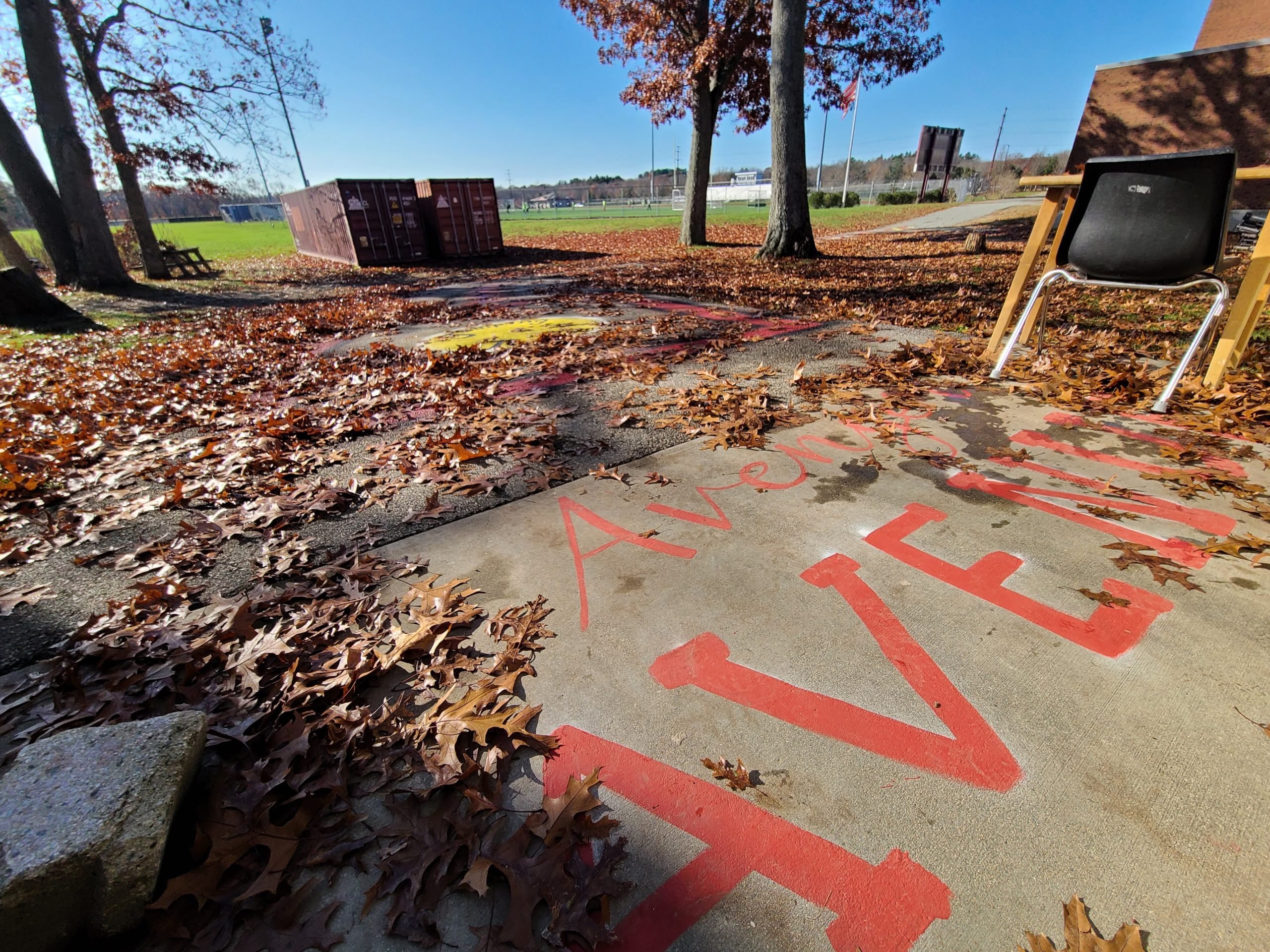 Above: “Avenger Avenue” – the school’s new sensory path – lies between the main gym and Carcieri Field.

The team makes lemonade out of lemons after losing its season

The East Greenwich High School Unified Volleyball athletes started the school year as several other teams did, without a season. Along with football, girls volleyball, and competitive cheer, it was among the sports unable to compete during this fall due to the Covid-19 pandemic.

In a typical year, the Unified athletes and their partners would have indoor practices to prepare for competition with other teams and enjoy playing a sport they love. (Unified sports pair athletes with disabilities with typically developing “partners.”)

“We were so eager to play volleyball and it’s so sad we can’t now,” said Johnny Marasco, the team’s captain along with Emma Giannelli. “It does take away a lot of the competitiveness we got from previous seasons.”

“I think everyone missed it more than I thought they would. All of a sudden, we had everyone asking when practice would be and saying, ‘Please, can we play volleyball?’” said Emma.

They couldn’t – as an indoor sport, it was not allowed.

The team did not give up the season though. Still holding regular practices outdoors under the direction of coaches Patty Carosotto and Lisa McKay, they began to experiment with different activities, such as running the school’s new fitness trail and playing frisbee or golf.

“It was cool to see the athletes so excited for [practice],” said Emma. “Even the days when I was like, ‘I’m tired, I don’t feel like running the trail or playing frisbee,’ I would see one of the athletes in school and they would say they were so excited to play frisbee after school. . . . It made it so much more worth it”

In addition to trying out new sports, the team also got creative with projects to give back to the school community. They started with writing messages in chalk in front of the school’s main entrance to brighten everyone’s day with positive messages such as “Have a Wonderful Day,” and “You Got This!”

Next, the team decided to make a sensory path with the help of their coaches. It’s located along the side of the school parallel to the track. The path is made of different colored shapes spray painted along the cement walkway. Each one coincides with a different activity, such as a jumping-jacks square, a line to serve as a balance beam, and a ladder for drills. In addition, they have created an attachment for workout bands on a nearby tree and plan on adding other equipment such as kettlebells.

The inspiration came from Emma’s experience babysitting over the summer.

“Over quarantine, I would babysit for my neighbors who lived right across the street from me,” she explained. “I would go outside and draw with chalk obstacle courses for them. I liked it because I could sit in my yard and watch them and play with them but still have it be noncontact. One day I was just walking out of my house and there were a bunch of random kids from the neighborhood playing on it, so I just kept looking out the window, and there were so many kids. I kept making [the chalk obstacle courses] and made them all in different spots.”

The Unified team is calling it Avenger Avenue. They are excited to not only enjoy it themselves but share it with others. The members take pride in knowing that they can share what they made with fellow EGHS Avengers.

As Johnny told members of other teams unable to play, “Get involved with the community as much as you can. Whether that’s something as simple as a clean up on Main Street, just get involved with your community.”