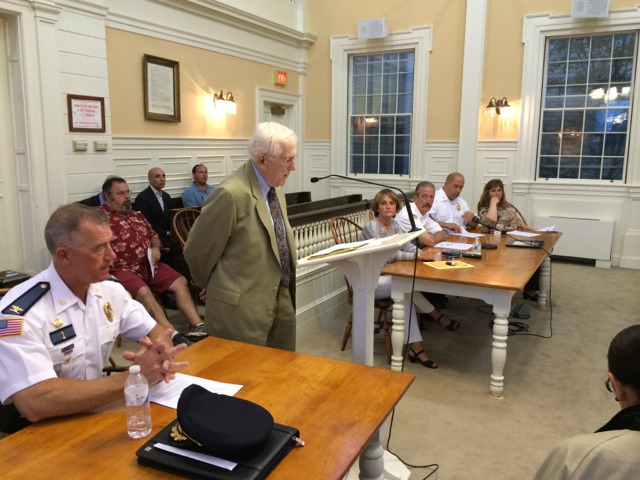 The EG Fire District senior citizen tax deduction was not carried over to the town property tax assessments when the district was merged with the Town of East Greenwich last June.

That changed this year, a year after the fire district became a town fire department. The town and fire district tax bills were combined; today residents receive just one property tax bill. However, on this year’s tax bill (fiscal year 2015), the fire district senior citizen deduction was gone.

“I learned of this two weeks ago, after the tax bills went out,” said Town Council President Michael Isaacs Tuesday. “Should we have known? Yes. It was an unintended consequence of all that was going on to accomplish the merger.”

The issue came up at the council meeting Monday when aggrieved resident David Slitt, 84, spoke about it during public comment (see video, attached).

“This encroachment upon this particular fund is so out of line, is so absolutely uncharacteristic of the people who run this town, that I felt it was my duty, finally, after all these years of residency, 33 years, that I felt an obligation to speak out,” he said. “It is … a violation of senior citizen rights, a violation of due process, an abuse of municipal authority, a deceitful method to obtain protected rights of seniors, an abandonment of respect that initiated this consideration at its outset.”

Isaacs said he was “confident” the lost deduction situation would be remedied by next year’s tax bill. He said that, by state law, tax credits could only be adjusted in a revaluation year. Revaluation is taking place this year in East Greenwich.

“Somewhere along the line, the ball was dropped,” he conceded. “The bottom line now is that we are aware of this and it will be rectified.”

Slitt said the former Fire District deduction was not large, but said that was beside the point.