The two political newcomers vying for the open Senate Dist. 35 seat agreed on several items at the candidates forum at New England Tech Monday – from the need for a gubernatorial line item veto and protection for abortion rights to focusing on “green energy” and gender pay equity.

But Dana Gee, a Republican running for the seat being relinquished by her husband, Sen. Mark Gee, and Bridget Valverde, a Democrat, differed on some issues, including truck tolls, universal health care, and the state’s education aid formula.

While both candidates said giving the governor the line item veto was among their top priorities, Gee said unions had fought hard to defeat it, then noted Valverde had taken campaign union campaign money. 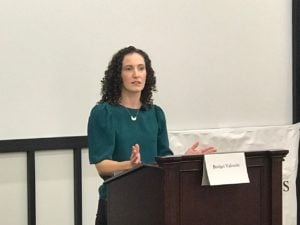 “I have a problem with that,” Gee said.

“Our unions are incredibly important,” Valverde countered. “‘Union’ is not a dirty word.”

The two differed on universal health care, with Valverde in support, saying Medicare was “the model we should be following.”

Gee said, with the Affordable Care Act, nearly all Rhode Islanders had health insurance and that now was not the time for universal health care.

Gee was forceful in her response about whether or not she would support Senate President Dominick Ruggerio in the next session, saying he was the epitome of the “old boys network,” having been in the General Assembly for more than 35 years. “He’s worked for unions his entire life,” Gee said, also mentioning two arrests for which Ruggerio was not formally charged. “Ethically, I have a huge problem with that.”

Valverde refused to say if she would support Ruggerio, but did not rule it out.

On a question about taxes prompting people to move to lower tax states like Florida or New Hampshire, Valverde said she disagreed and thought people were moving into the state. Gee, in a contrary GOP response, said she wasn’t too worried about the “death tax,” since it only applies to those people who die with an estate worth more than $1.5 million. That, she said, was not going to be her problem.

They both agreed on the importance of gender pay equity. Valverde said she thought the issue was important for all women, but particularly for women of color. Gee said she thought the reason a bill didn’t pass the House last session was because it wasn’t clear enough on “comparable work.”

Truck tolls brought out one of the bigger differences between the two candidates, with Valverde supporting the tolls and Gee saying she thought it was “unAmerican” to toll just trucks.

Gee also railed against the state aid for education formula (East Greenwich does not get much state aid compared to other municipalities) and said the Caruolo Act – which allows School Committees to sue Town Councils for increased funding – ”needs to go.”

Valverde, alternatively, said she thought the funding formula was “quite fair.”

The forum, which was attended by more than 80 people, was presented by East Greenwich News and the EG Chamber of Commerce and hosted by New England Tech. It was moderated by RIPR’s Chuck Hinman, an EG resident. There will be one more candidates forum on Monday, Oct. 15, a two-part evening with School Committee candidates up first, followed by Town Council candidates.