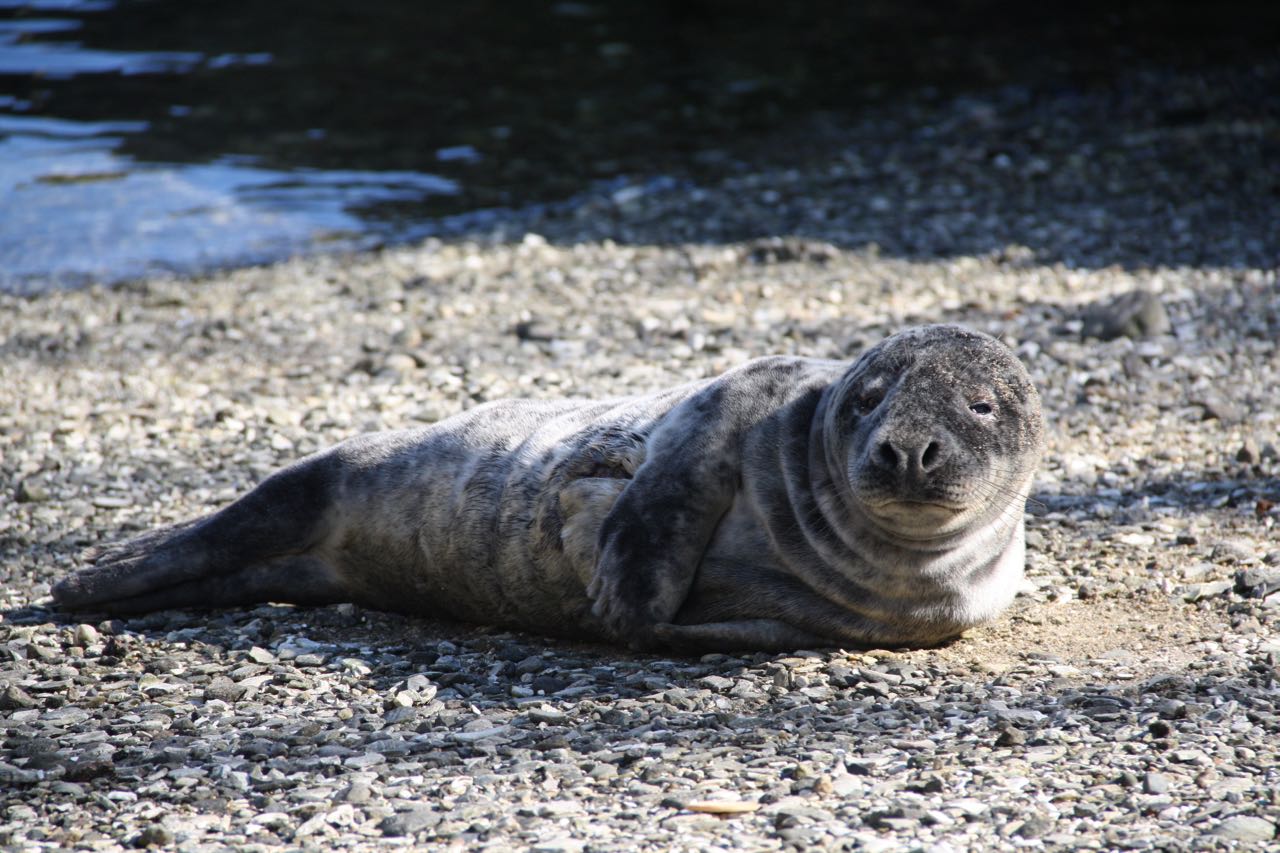 A harbor seal on the boat ramp near the shanties on Water Street Tuesday afternoon.

Do not touch or feed the seal, says Mystic Aquarium.

East Greenwich, R.I. – The little guy appeared Monday in front of one of the shanties on Water Street south of Rhode Island Clam. A little more than 2 feet long, with a mottled gray-black coat, it was a the harbor seal. They are pretty common in Narragansett Bay this time of year but not so common hanging out near Water Street.

Needless to say, our new friend has caused a bit of a fuss, with passersby and those who’ve seen photos on social media stopping to say hello. On Tuesday, it was moving around, lifting its head, and occasionally opening its mouth. It did not appear to be in distress.

According to Allen Gammons, the seal was first seen by quahogger Joe Amato, who contacted Mystic Aquarium. Gammons said someone from the aquarium checked out the seal Monday and said it was OK and would return to the water without help. Sure enough, when the tide came in Monday afternoon, the seal swam off. Tuesday morning, it returned.

The wound is below the seal’s top fin.

Sarah Callan, animal rescue program assistant manager at Mystic Aquarium, said Tuesday volunteer first responders have been checking in on the seal multiple times since first alerted Monday. While the seal does have a wound on its side, Callan said it appears to be healing.

“They have pretty remarkable healing capabilities for a wound like that,” she said. “Unless we see other behaviors or symptoms, we’re kind of just monitoring him right now. We want to give an animal every chance to remain in the wild.”

Callan noted the federal Marine Mammal Protection Act actually prohibits people from getting closer than 150 feet of a mammal like the seal. She acknowledged that would be difficult with this particular seal, considering how close it is to Water Street.

The MMPA says people are not supposed to approach, harass, or harm any marine mammal. In the case of this particular seal pup – estimated to be around 6 weeks old – “any stress could slow the healing process,” said Callan.

She noted that seals will haul out for days at a time and the fact that this seal has been going in and out of the water and is responsive means the aquarium will not intervene.

“Right now, we’re keeping a really close eye on him,” said Callan. “If rehabilitation is warranted, we will bring him in.”

Harbor Seal Update 3/1/18: Our friend was picked up by Mystic Aquarium Wednesday and taken to a more secluded beach in Rhode Island, where it quickly disappeared into the water. Fingers crossed.

Here’s a list of do’s and don’ts from Save the Bay:

 Give the animal plenty of space. Crowding around stresses the animal and may cause it to act aggressively.

 Keep pets away from the stranded animal. Not only can they bite and cause injury to the animal, but may be injured by the animal. Diseases can also be transmitted between stranded animals and pets.

 Do not pour water on a seal, feed it, cover it or attempt to move it into the water. It is normal for seals to come ashore to rest – they often choose to be dry.

 Do not touch the animal. All marine mammals are protected by the Marine Mammal Protection Act. This law makes it illegal to touch, disturb, feed or otherwise harass marine mammals without authorization. Seals of Narragansett Bay

 Be observant. Take note of any obvious signs of injury, the overall body condition of the animal (is it robust or emaciated?), identification tags, the presence of other animals (especially important with dolphins), the sea state, and any recognizable landmarks that will make it possible to locate the animal.