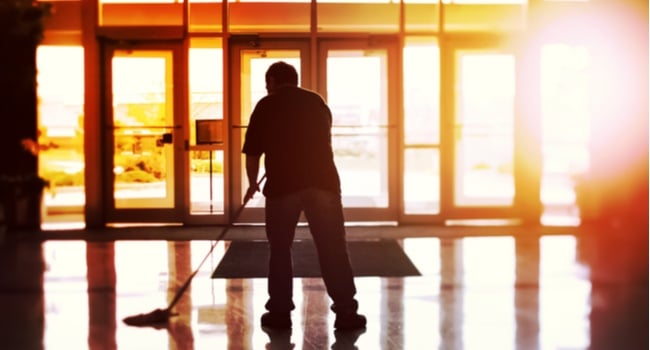 As it happens, the district had been planning to contract with a cleaning assessment company before the COVID-19 pandemic descended on Rhode Island making cleaning and disinfecting suddenly of primary importance. That was because, according to School Committee member Alyson Powell, the district does not have a standard for cleaning.

“It’s something I’ve wanted to do for a long time,” said EGSD facilities director Bob Wilmarth about establishing cleaning standards. “From a facilities point of view, it’s part of the picture.”

The district had $20,000 in the 2021 budget set aside for the cleaning assessment, based on an earlier estimate from Core. When the pandemic arrived, suddenly there was more than just a need for cleaning standards.

“What do we need to do to our buildings in order to get students back into them?” said Powell at the meeting last Tuesday.

If the state issues guidelines such as every door handle in the building needs to be wiped down “continuously,” what does that look like and how long does that take?

“The guidelines are going to be fairly general. Then we’re going to need to figure out how to apply them,” he said. “Core knows a lot of what the best practices are.”

And instead of a $20,000 estimate, now Core is estimating the job can be done for $10,000. That’s because there would be virtual meetings instead of being done in-person, and the site visit, depending on when the bid were approved, could be done at the same time the Core team was in Rhode Island for a site visit at Brown University.

According to Wilmarth, Core, a New York company,  is one of only three companies in the country that do this type of work. The other two are located in North Carolina and Arizona. Getting the job done now, at a lower cost than originally planned, seemed like “a no-brainer,” said Powell during the School Committee meeting.

For Town Manager Nota, however, it’s not that simple.

“To me that is not an emergency. I didn’t see where it would qualify as an emergency,” as it would need to under the state procurement guidelines, he said Wednesday. Nota said he thought the district could go out to bid now, get bids back and hire a company by early June. Wilmarth was not so optimistic on the timing, saying Friday he thought a request-for-qualifications-type bid would take several weeks. Even if they hired a company by mid-June, that company would not be back with recommendations until mid-July – “that only gives us a few weeks” before the school year is to begin, he said.

“That was the reason to see if we could get it approved on an emergency basis,” said Wilmarth. “It is exigent that we have this information as soon as we can for the safety of students and staff.”

Nota said Wednesday he would be talking with Supt. Alexis Meyer about the bid.