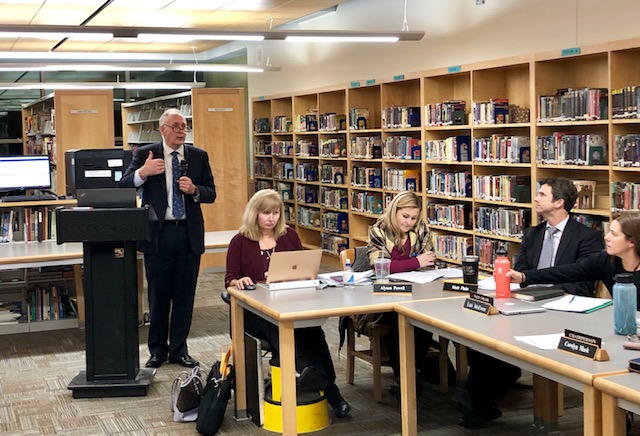 At a School Committee meeting in September, a parent asked what had happened to money set aside to replace the high school turf field. School Committee Chair Carolyn Mark said there was no money set aside to replace the turf field, which prompted some parents to later question what had happened to the $956,000 in the district’s surplus account (typically referred to as the fund balance) labeled assigned for capital.

Indeed, between fiscal years 2013 and 2017, that amount shows up in the school’s audit. In FY2018, however, the fund reserve account no longer had a line item for capital.

Director of Administration Greg Booth went through a lengthy explanation Tuesday night, Oct. 15, with the end result that $380,000 of that money was spent to cover an operating expense deficit incurred in 2017 and the auditors chose to reclassify the remaining $588,000 as “unassigned” fund balance because by then the school district had no other fund balance from which to draw in case of emergency.

Some background: Voters approved a $6 million bond for athletic fields in 2006. The money paid for the construction of Carcieri Field at the high school and other field projects. (Prior to that, football and lacrosse games were played at Eldredge Field and the school was not able to host track meets.) The decision to install artificial turf on the field came with the knowledge that the turf would need to be replaced after around 10 years and replacement would be costly (the estimate at the time was $1 million). The hope was to be able to put money aside on a regular basis so when it came time to replace the turf, the money would be there.

But, as former School Committee member Bob Durant explained at the meeting Tuesday, the Great Recession hit in 2008 and the next few years were lean ones. Meanwhile, voters had approved another bond in 2008, for $52 million this time, to build a new middle school because over the years maintenance issues had piled up.

No one wanted to be in that fix again – needing to build a new school because the old one hadn’t been taken care of – and there was a lot of talk about needing to put aside money for capital maintenance.

Starting in 2013, the school district had some years of budget surpluses and the School Committee was able to add to the district’s fund balance, and that’s when the $959,000 in the assigned “capital” fund balance appeared. Assigned money in a fund balance is technically no different than unassigned, Booth explained. Both can be spent or moved by the finance director (i.e. director of administration) as deemed necessary. By labeling that $959,000 “assigned,” the district was essentially saying, we hope to save this money to spend on capital maintenance.

Spending down of reserves continued in 2017, when the School Committee budgeted the use of $525,000 of fund balance for operating expenses and then ended the year with a $204,000 deficit, dipping into the fund balance for a total of $729,000, Booth explained.

For FY2018, the School Committee budgeted $396,000 from fund balance toward the operating budget. That money had to come from surplus assigned for both technology and capital because the unassigned fund balance number was down to $4,000. That was also the year the high school library went without a librarian for lack of funds, and it was the second year there was no choral program at the high school, again a move to save money.

Booth said by June 2018 (the start of FY2019), the only money left in the unassigned and unrestricted fund balance (restricted funds to cover health care expenses remained) was $588,000. He said the auditors moved that money to the “unassigned” category to give the district leeway in case of emergency.

“It’s a hope to use if for the fields or other related things,” he said. “We needed money in 2018 to close out the budget gaps. That was the only place to pull money from. That was the only fund balance available.…. So [the existing unassigned] $588,000 is from that [assigned] capital fund. It still exists. The other part of it got used in the fund balance.”

Resident Tricia Colgan disagreed with both Booth and Dronzek’s explanations.

“I feel like I’m in bizarro-land because every year at the budget, and people sitting at this table said, that money’s allocated for field replacement,” she said. “If you spent it, fine. Just say it. But I’m sorry, I respectfully disagree that there was not money put away…. There was $959,000 in capital expenditures to replace that field in 2019 when it was 10 years old.”

“There was never a decision to take the money and move to someplace else,” Chairwoman Mark said. “There was absolutely a decision made to draw down some fund reserves to close some operational gaps.”

Committeewoman Anne Musella asked if any bond money had been in reserves, echoing another question that had arisen in September.

Booth said all bond monies were held on the town’s side and that no bond money was ever part of the school district’s fund balance.