A school shooting is every parent’s worst nightmare. For parents of children with special needs, the anxiety can increase 10 fold.

“One of the Parkland videos I saw raised a question I never thought of before,” recounted one parent during a meeting of the EG Special Ed Advisory Committee last week to discuss school emergency protocols for students with special needs. “When the SWAT team stormed into the classroom, they were screaming at the top of their lungs to ‘get down, get down.’ It was chaotic and loud – and those were the good guys.”

The parent wanted to know if children were being told that even when the police arrive, it’s going to be loud, disturbing … and frightening.

Another parent wondered how her son would handle walking out of a building with arms raised – the now-familiar pose required by police when evacuating building after a shooting incident.

She told how after Parkland her daughter had asked what do to if there was a shooter – should she go and find her brother? They both attend East Greenwich High School.

“It’s terrible, but I told her, ‘You have to get out of the building and [her brother’s] teachers will take care of him,’” said the mom. 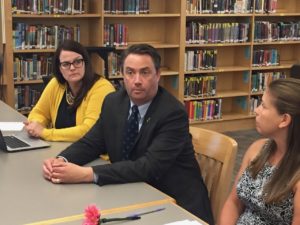 Supt. Victor Mercurio addresses the parents during the SEAC meeting on emergency preparedness.

“Lisa and I talk constantly about the needs of specific students,” said Supt. Victor Mercurio Thursday, referring to Lisa Hughes, the district’s special ed director. For instance, he noted that some children with special needs have extreme temperature sensitivity. What happens if you have a drill or incident in January?

Most of the time, special ed teachers of tipped off before a drill at an EG school. On Thursday, the question arose: is that always a good idea? Obviously, it can help the teacher prepare for the alarm and drill requirements but shouldn’t teachers need to practice handling an emergency on the fly, just as it would be in real life?

School Resource Officer Bert Montalban said he makes a point of getting to know all the kids at Cole, where he spends the bulk of his day, especially kids with special needs. A mother corroborated that, noting that Officer Bert said hello to her son every single day for his three years at the school.

While police are a regular presence in school buildings, especially at Cole and EGHS, there is no similar arrangement with the fire department. Could firefighters get to know school kids too, one parent asked.

EG Fire Lt. Rob Warner. Warner said he visits the schools on a somewhat regular basis to check alarms but that the fire department does not have the same level of interaction with students as the police.

“We don’t really go for visits,” said Warner. With the large trucks and heavy gear, “we have a tendency to be disruptive.”

Supt. Mercurio asked parents how the drills were working for their children.

“I’ve never asked in an IEP what would happen in an emergency,” said parent and SEAC leader Nicole Bucka. “Loud sounds register as pain for my son.”

It should be part of the IEP discussion, said Special Ed Director Lisa Hughes. “We need to start thinking of these particular obstacles.”

One suggestion for drills was having a colored sticker or marker to put on the shirt of a student with a disability in event of an emergency, so first responders would know that unexpected behavior did not constitute a threat from the child. Another idea was to have a “go” bag ready for emergencies, with items to soothe students and help them cope.

Officer John Carter, who works with young people and the elderly, was also at the session Thursday. The EGPD has three officers for youth. In addition to Carter and Montalban, Steven Branch is a school resource officer at the high school.

Parents learned they could contact both the police and fire dispatchers and ask them to add an alert that would show up electronically if a call came in for their address. The alert would tell public safety officials that a person with special needs lived there.

No specific action plan was created Thursday, but for some parents in attendance, the conversation was at least a start.