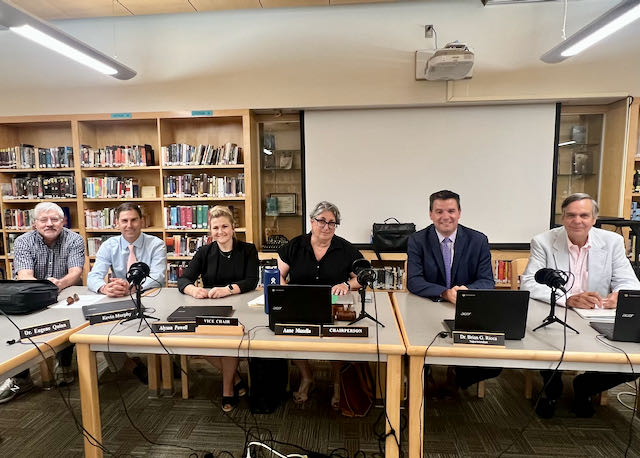 The School Committee welcomed Brian Ricca Tuesday evening at his first-ever meeting as the district’s superintendent. The committee also reviewed updated policies – the majority of which they approved but some saved for later discussion.

The meeting began with a presentation by Ricca summarizing his professional experience and “entry plan” as he starts the new position.

“When I was first considering being a superintendent, I really didn’t have an understanding of what superintendents did,” Ricca said, referring to his first superintendency, in Montpelier, Vt. “I thought they just worked with school committees and pushed along papers. Obviously, my predecessor Mrs. Meyer did not do just that.”

Ricca said his goal as superintendent is to “get out there and to our schools as much as possible.”

Ricca then quoted a traditional Swahili greeting, Kasserian ingera, which translates to “How are the children?” The phrase, he says, is common among members of the Maasai tribe in Kenya and Tanzania.

“Most of the members of these tribes were warriors,” Ricca said. “The first thing they say to each other…is, ‘How are the children?’ As I consider my entry plan outline, I hope to be able to answer that question in a very real sense for the School Committee.”

Ricca also spoke of his next steps in strategic planning, anticipating they’ll be based on “the capacity of [district-level officials and school principals] in this district to bring us further along in this plan.”

“In addition, special attention will be paid to data currently being collected in the district to inform how best to proceed,” Ricca said of the strategic planning.

“As I’ve said from the beginning, one of the most attractive things about this position is the [district’s] strategic plan,” Ricca said. “We are here for all of the students and families in East Greenwich.”

This is Ricca’s third job as a superintendent, but the largest district so far.

“I know how to be a superintendent,” he said. “I want to grow to be a great superintendent for East Greenwich. That means listening to the community, students, faculty, staff, employees, principals, leadership, and School Committee.”

“Thank you for putting together the plan as we had discussed,” Chair Anne Musella said. “It’s a three-month articulation of…what you’re doing instinctually anyway, which is really gathering information [and] meeting with various stakeholders.”

“Thank you very much for the entry plan,” said committee member Eugene Quinn. “We all look forward to working with you and are thrilled to have you.”

The committee also reviewed policies that were revised earlier this year to keep up with local laws and regulations.

One revised policy, which addressed interrogation of students by police, was held for a vote at a later session.

During the first reading, committee member Nicole Bucka (who was not present at Tuesday’s meeting) raised the point that the policy said there are “exigent circumstances” under which parents would not need to be present while their child is interrogated by police.

“Ms. Bucka’s concern was [with] what happens to students with special needs,” Musella said Tuesday. “I didn’t know how to write that into the policy. We might want to revisit that.”

School solicitor Aubrey Lombardo agreed that revisiting the policy would be the best decision.

“Nobody wants their child speaking to the police without [the child’s parents] knowing at school,” said Lombardo. “Any time that you have police speaking to children … I just think, even if you’re looking at this strictly from a liability perspective of the district, it makes sense to have more due process than the law requires.”

Committee member Tim Munoz brought up that kids might willingly share more information with a school resource officer, not aware that SROs are officers themselves.

“I could see a situation where kids don’t really think of a school resource officer [as a police officer],” Munoz said. “I would think some kids might perceive SROs differently than they might a police officer.”

The committee approved updates to policies regarding medical marijuana and medication to align with changes in the law.

The committee members also looked at the district’s communication protocol, which was revised to give district officials just 5 school days to reply to complaints made by parents/guardians, rather than the original 10 days.

“It really is trying to strike a balance between a prescriptive set of rules for staff versus level-setting expectations [and] guidelines for the community on what they should do and what they should expect in return,” said committee vice chair Alyson Powell.

The committee plans to read the protocol again and adjust some wording at a future meeting before deciding on its approval. 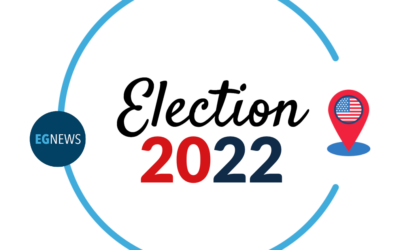 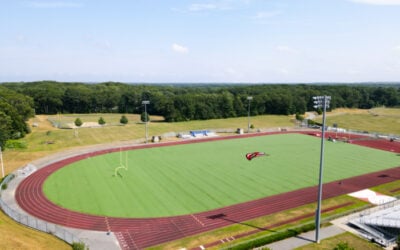 Above: A drone photo of Carcieri Field in July, with the Avenger logo in place. Photos by Chuck... 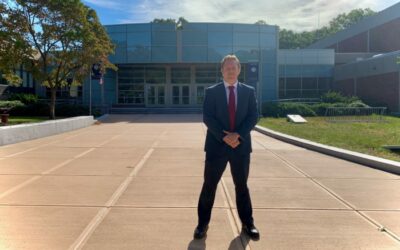 Search on for New EGHS Principal After Hopkins Resigns 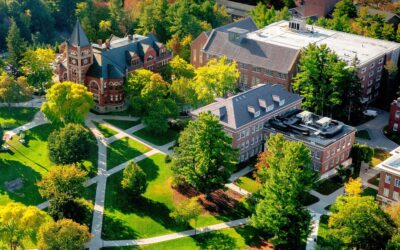